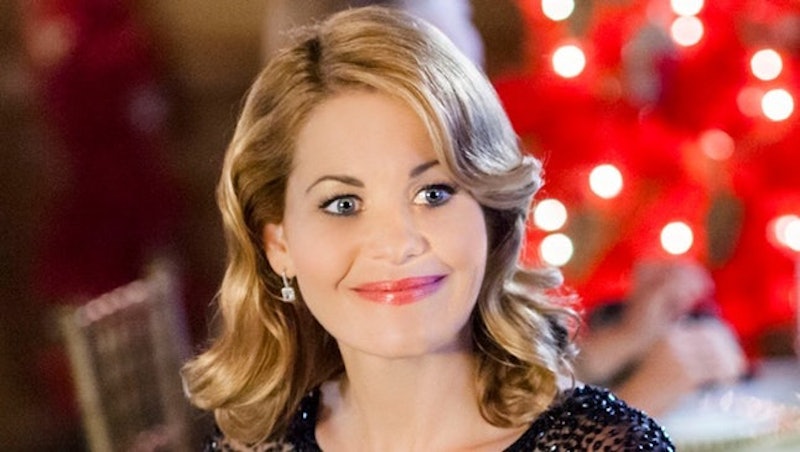 There's plenty to love about Hallmark holiday movies, but the stars are a big draw. No, you're not likely to see Meryl Streep pop up anytime soon, but it's not at all unusual to see your favorite '90s actors in Hallmark Christmas movies. This year is going to be no different. With a record-setting 37 new original holiday movies set to debut in 2018 (including one New Year's tale), the Hallmark lineup includes originals starring your favorites from Full House, Fresh Prince of Bel-Air, and much more.

If you grew up in the '90s and love holiday movies, this is your year. From a shoe addict's take on A Christmas Carol to an intense gingerbread house building competition, actors from the TGIF lineup and beyond are well-represented this season. And you're not going to want to miss a single minute of these sure-to-be gems.

Some '90s actors — like Full House's Candace Cameron Bure — have been making Hallmark movies for years, while other '90s stars are wading into the snow-covered masterpieces that are Hallmark holiday movies for the first time. No matter how many Christmas-themed meet-cute movies these actors have made, it's always good to see them again, especially during the holidays. After all, these '90s favorites feel like family, and there's no better time of the year to hang with the fam than the festive season.

Wings doesn't get as much love as it deserves, but it's a '90s sitcom classic, and if you watched it, then chances are you had a major crush on Steven Weber. Weber's career hasn't slowed down one bit since his days on Wings. In fact, he's recently been in shows like iZombie, 13 Reasons Why, and Mom. This holiday season you can catch him in Hallmark Movies & Mysteries' Return to Christmas Creek as an estranged uncle at the heart of a mystery that's dividing a family during the holidays.

The super nostalgic Wonder Years made Danica McKellar a household name in the early '90s. She's starred in her fair share of Hallmark movies since then, and this holiday season, she's adding another Christmas title to her list with Christmas at Grand Valley. McKellar stars as an artist who is hoping a visit to her small town for Christmas will reawaken her inspiration.

Lacey Chabert starred in Party of Five, and provided the voice of Eliza Thornberry in The Wild Thornberrys. (And she played Gretchen Weiners in Mean Girls.) She's also a Christmas movie expert, which means her gender-swapped Pride, Prejudice, and Mistletoe needs to be on your must-see list this year. Chabert is starring as a female Darcy, so you know it's going to be good.

Ashley from The Fresh Prince of Bel-Air is all grown up, and a Christmas movie regular. Not only is Tatyana Ali starring in Hallmark's Christmas Everlasting as a corporate lawyer whose sister's death leads to her returning to her hometown for the holidays, on Nov. 25, you can catch her in the Lifetime holiday movie Jingle Belle as a woman returning home for her town's annual Christmas Eve pageant.

The Hallmark Movies & Mysteries' film Christmas on Honesuckle Lane includes two '90s stars in leading roles. Cybill's Alicia Witt (a Hallmark regular) plays a woman returning to her family home one last time to spend Christmas with her siblings before the house is sold. The film also stars Laura Leighton, the official queen of '90s soaps thanks to her roles on Melrose Place and Beverly Hills 90210.

Full House and Fuller House have ensured that Candace Cameron Bure's legendary '90s character, D.J. Tanner, will live on forever. However, she has a pretty prolific list of holiday movie credits to her name too. This season she's adding A Shoe Addict's Christmas to her ever-growing list of festive films. She's set to play Lucy, who despises all things Christmas until she gets trapped in the department store where she works on Christmas Eve, and her guardian angel takes her on a tour Christmas past, present, and future. And who's playing her guardian angel? None other than Jean Smart of Designing Women fame.

There's no shortage of holiday spirit among the Full House gang. Lori Loughlin isn't just known for playing Aunt Becky, she's also a familiar face to Hallmark fans for her extensive work on the network's movies and shows. She's adding another title to the list with Homegrown Christmas. In the film, she plays a woman who decides to quit her job to reevaluate her life only to return home for Christmas and run into her high school sweetheart.

Sister, Sister star Tia Mowry-Hardrict has an incredible post-'90s résumé that includes her own cooking show (Tia Mowry at Home) and a role on the hit series The Game. This year, she's set to make a splash in the Christmas movie arena. In Hallmark's A Gingerbread Romace, she'll play an architect whose big promotion is riding on a a gingerbread house building contest. Meanwhile, her Lifetime holiday film My Christmas Inn, sees her playing a career woman who inherits an inn in Alaska just in time for Christmas.

That's right, the Tanner family isn't done representing yet. Full House and Fuller House favorite Jodie Sweetin will play the lead in Entertaining Christmas, where her character is set to take over her mom's Martha Stewart style lifestyle empire despite not being able to cook, sew, or do anything else remotely crafty.

When it comes to Christmas spirit, it's hard to outdo Loughlin this year. In addition to Homegrown Christmas, she's also starring in the TV movie Christmas special for Hallmark's When Calls the Heart.

The '90s spirit is alive and well on Hallmark channel this holiday season, so make sure you tune in to celebrate Christmas with all of your favorites.

More like this
Netflix Reveals First Look At Wednesday In The 'Addams Family' Spinoff Series
By Bustle Editors
17 Years Ago, 'Hannah Montana' Reportedly Almost Cast This 'Gossip Girl' Star
By Grace Wehniainen
The Office Lego Set Includes All Your Favourite Dunder Mifflin Characters
By Sam Ramsden
Josh Peck Shows Love To Jennette McCurdy After Her Shocking 'iCarly' Revelations
By Radhika Menon
Get Even More From Bustle — Sign Up For The Newsletter