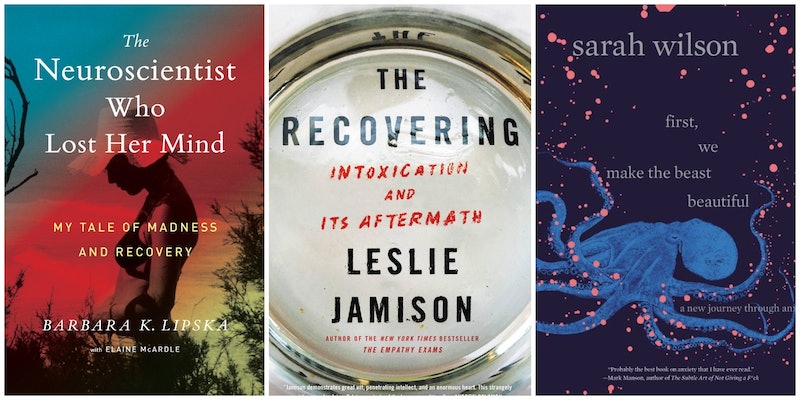 According to the most recent data from the National Institute of Mental Health, one is six adults in the United States live with a mental illness. Despite the fact it is so common, individuals who don't suffer from a condition, and even those who do, still struggle to understand mental illness in 2018. Luckily, there are some pretty incredible books about the topic coming out this year that shed an important light on a difficult topic so many of us still have a hard time making sense of.

As someone who struggles with depression and anxiety disorders, I have to admit, the nasty rhetoric around Donald Trump's mental instability in the wake of Fire and Fury's sensational publication is a painful one to endure. Whether it is on the news, social media, or in the checkout line, I can't seem to avoid conversations about our "crazy" president. While I agree that Trump is an unfit candidate for office — his lack of experience, his failed business record, his dangerous nationalist views — I can't help but feel totally misunderstood, if not personally attacked, by a narrative that insists mental health is a measurement of someone's ability to be successful. It's just simply not true.

From famous people like The Good Place star Kristen Bell to average Americans like the successful owner of my local yoga studio, there are millions of individuals who have a mental illness, but who still lead happy and productive lives. So why is it that, when we talk about depression, bipolar disorder, anxiety and panic disorders, and those who suffer from them, we insist on believing the same old lies about mental illness? The truth is, despite the fact that over 43.8 million Americans live with various conditions, mental illness is still largely misunderstood.

If you are struggling to cope with your own experiences, or trying to understand those of someone you love, here are 10 new and upcoming books about mental health that will provide you with the insight you need, and the nuance the topic deserves.