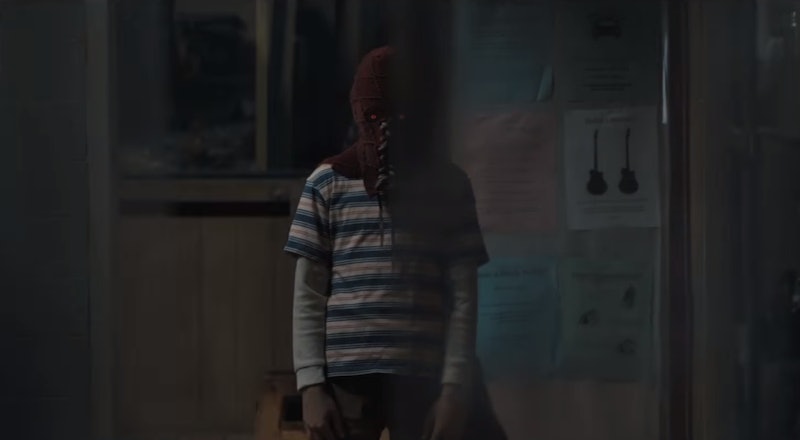 You might expect that the fall, particularly around the end of October, would yield the most and best horror releases. With the chilly air setting in, the days growing darker, and the eerie ambiance of the Halloween festivities going around, it's a prime time of year for horror. But this list of scary movies coming out this spring is pretty stacked, because the genre is delivering all year round.

The first few months of this year has brought a handful of some great scary movies so far. Netflix premiered Velvet Buzzsaw, which stars Jake Gyllenhaal as an art critic who figures out that paintings by a mysterious deceased artist have supernatural powers. Happy Death Day 2 U, a sequel to the 2017 box-office hit, landed on Valentine's Day. And Us, Jordan Peel's follow-up horror flick to the Oscar-winning Get Out is already a box office smash.

So look ahead to the rest of this season, and you'll see that there are quite a few more horror films and eerie thrillers yet to come out. From a modernized Stephen King remake to a suburban stalker thriller, the spring slate is full of films that'll satisfy your need to freak yourself out.

This new adaptation marks the second time the Stephen King novel has been made into a film. (The 1989 original is streaming on Hulu.) While the first movie is a little campy, this new version looks seriously creepy.

2. The Haunting Of Sharon Tate

The murder of actor Sharon Tate at the hands of the followers of Charles Manson gets a philosophical scary movie treatment. Hilary Duff stars as the doomed mother-to-be, in a version of the story that seems to inject a paranormal streak to famous killings.

In theaters and on VOD April 5.

Robert Pattinson stars in this outer space-set thriller from director Claire Denis, about a group of criminals sent into space for a mission that gets hijacked by a scientist with a disturbing goal.

A resourceful frontierswoman settles on a remote stretch of land in the American wilderness in the 19th century. The wind never stops howling, so she suspects a supernatural presence, which her husband calls nonsense. But the isolation soon gets the best of them.

In Netflix's Bird Box, people have to keep their eyes covered lest a mysterious force show them their worst fears, leading to their deaths. In The Silence, it's noise that draws the alien-like creatures to you, in a story that looks similar to A Quiet Place, just with smaller creatures. Keirnan Shipka stars as a girl who lost her hearing at 13, with Stanley Tucci as her protective father.

6. The Curse Of La Llorona

As the Mexican folktale goes, La Llorona drowned her own children in a river and cries while looking for them in the river. Linda Cardellini stars in this adaptation of the tale, which is rumored to be a part of the Conjuring universe.

Dennis Quaid stars in this thriller as a creepy guy who just can't let his old house go. He terrorizes the young couple (Michael Ealy and Meagan Good) who now live there and does generally creepy things like stand in the shadows behind trees and stalk people.

Brad Pitt stars as Roy McBride, an Army Corps engineer who travels through the solar system to find his father, 20 years after he left on a one-way mission to Neptune to search for extra-terrestrial intelligence.

What if Superman were evil? When a spaceship falls to Earth carrying a small baby, Elizabeth Banks and her husband adopt him as their own. This kid has super powers, but he doesn't seem to have the same desire to help humanity as the Man of Steel does.

Allison Williams and Logan Browning star as competing professional cellists who spiral down a sinister path. The film premiered at last year's Fantastic Fest, where some horror greats have gotten their start.

Streaming on Netflix May 24.

If your spring mood is dark and twisty, these upcoming releases have you covered.