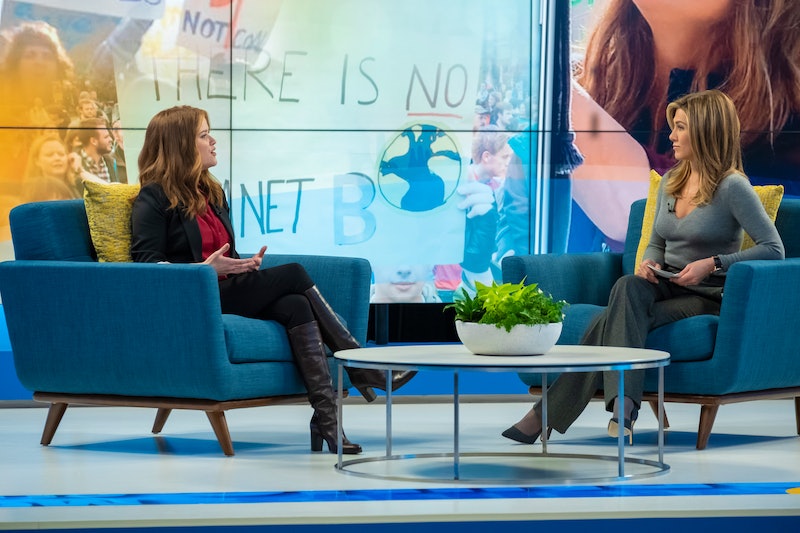 Topical TV dramas have a way of blurring the boundaries between reality and fiction, pulling you in and forcing you to question the world around you. That's what you can expect from Jennifer Aniston and Reese Witherspoon's new Apple TV series The Morning Show, in which a prominent news program is upended by the firing of one of its star anchors, Mitch Kessler (Steve Carell), after a sexual misconduct scandal. The first three episodes dropped on Nov. 1, but will be releasing weekly moving forward. So if you find yourself drawn in by the story's propulsive energy and want more shows like The Morning Show to watch (or re-watch) in the interim, here are 10 to get you started.

The obvious first choice is Aaron Sorkin's HBO political drama, which ran from 2012 to 2014. Like The Morning Show, it mirrors current events while going behind the scenes of a fictional news network called Atlantis Cable News. The high-strung staff is constantly at odds with either the show's viewership, its demanding parent company, or both, all the while navigating complex relationships within the newsroom. Throughout three seasons, that dynamic weaves a complicated and sometimes ethically murky web. You can stream all three seasons on Amazon Prime Video or HBO.

Before creating The Newsroom, Sorkin made his TV writing debut with The West Wing, a 1999-2006 political drama that remains influential today. At the time of its release on NBC, first-time viewers were still processing the impeachment of Bill Clinton and then, the unexpected victory of President George W. Bush. The show follows fictional Democratic president Josiah "Jed" Bartlet (Martin Sheen) and his staff as they navigate political issues, negotiate policies, and attempt to tend to their personal lives at the same time. The series is available to stream on Netflix until next year, and will then move to HBO Max upon its 2020 launch, according to Deadline.

This AMC drama may not take place on the set of a news show or in the Oval Office, but it's definitely as fast-paced and drama-filled as The Morning Show. It's a nice change in that it's a period drama, set in the 1960s, and follows the "mad men" of Manhattan advertising back when they still tried to sell people on the benefits of cigarettes — which is far from the worst thing they do throughout the show's seven seasons. Mad Men is currently streaming on Netflix, but according to The Hollywood Reporter, the streaming rights will soon return to Lionsgate and could land on another platform next year.

Sharp Objects and The Morning Show both follow journalists, but Sharp Objects is more of a psychological thriller than it is a meaty, day-in-the life exposé. It stars Amy Adams as Camille Preaker, a crime reporter who, after being released from a psychiatric hospital, returns to her hometown to investigate the murders of two young girls. All eight episodes of the mini-series are available to watch on HBO.

Great News' light-hearted comedy helps to balance out this list of admittedly heavy content. Written by 30 Rock creator Tracey Wigfield and executive-produced by Tina Fey (both of whom also act in the show), the series follows Katie Wendelson (Briga Heelan), an up-and-coming news producer who finds herself with a difficult intern: her mother (Andrea Martin). You can watch both seasons on Netflix.

This crime drama set in Baltimore, Maryland is based on the real experiences of creator David Simon, who is a former crime reporter for The Baltimore Sun. Often lauded as one of the greatest TV shows of all time, it's an honest and sometimes morally ambiguous depiction of the city's relationship with law enforcement, peering into its illegal drug trade, education systems, local government, and local media. All five seasons are available to stream on HBO.

Another show whose plot is ripped directly from the headlines, The Loudest Voice recounts the rise and fall of Roger Ailes, who resigned as as chairman and CEO of Fox News after allegations of sexual harassment against him surfaced in 2016 (he died the following year). You can watch its seven episodes on Showtime.

Ugly Betty offers a comedic change of pace while maintaining the frenetic workplace tone of The Morning Show, following a conventionally unfashionable woman named Betty (America Ferrera) who finds herself working at a New York City fashion magazine without any real industry knowledge to keep her afloat. You can stream the entire show on Hulu.

If you're a Sex and the City fan, watching The Bold Type will feel like meeting its spunky millennial daughter. The Freeform show is inspired by the life of former Cosmopolitan editor-in-chief Joanna Coles, and follows three young, aspiring magazine journalists navigating work, love, and self-identity in New York. Seasons 1 through 3 are available to watch on Hulu and Freeform, with a fourth season slated to premiere in early 2020.

Murphy Brown, in many ways, paved the way for The Morning Show's existence. The titular Brown is a hot-headed investigative broadcast journalist and working mom who doesn't take no for an answer and confronts plenty of social and political issues throughout her career. The show originally aired from 1988 to 1997, and was revived in 2018, though it was ultimately canceled after one season. You can still watch the revival and a few original episodes on CBS All Access.

More like this
'GoT' Star Emilia Clarke Says She "Just Can't" Watch 'House Of The Dragon'
By Brad Witter
Here’s Everything Coming To & Leaving Netflix In February
By Jake Viswanath
Yes, 'The Price Of Glee' Is Available To Watch In The UK
By Catharina Cheung
Here’s What Happens To Bill & Frank In 'The Last Of Us' Video Game
By Brad Witter
Get Even More From Bustle — Sign Up For The Newsletter
From hair trends to relationship advice, our daily newsletter has everything you need to sound like a person who’s on TikTok, even if you aren’t.