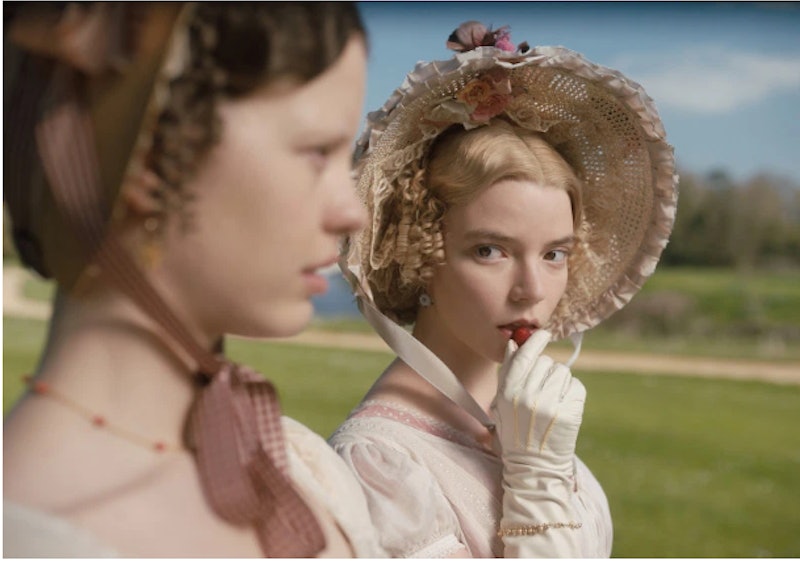 Emma Woodhouse, handsome, clever, and rich, will glide into theaters on Feb. 21, thanks to Autumn de Wilde's new film adaptation of Jane Austen's 1815 novel. There's been an uptick in classic novel-to-film adaptations lately, and we're all for it. Emma follows on the heels of Greta Gerwig's Little Women and Rashid Johnson's Native Son. 2020 promises more classic page-to-screen goodness, with Agatha Christie's Death on the Nile, Henry James' The Turn of the Screw, Stephen King's The Stand, Hugh Lofting's The Story of Doctor Doolittle, and Jack London's Call of the Wild getting adapted for film this year.

If you've got your tickets pre-ordered for the Feb. 21 premiere of Autumn de Wilde's Emma, you're probably already preparing yourself for the inevitable movie hangover — when Emma's credits roll and you have to move on in a world without its busybody heroine and Mr. Knightley. Obviously, reading Jane Austen's Emma should be your first step in getting over the movie, but let us encourage you to check out these classic novels primed for new film adaptations, as well:

Jane Austen's tale of second-chance romance has just the right amount of angst to keep audiences hooked. The story here centers on 27-year-old Anne Elliot, an unmarried daughter in a formerly rich family, who was forced, years earlier, to reject a proposal from Wentworth, a relatively poor suitor with few connections. Now, Wentworth is a Royal Navy officer with money to spare, and he's back in Anne's life, but can the two of them reconnect after all this time?

The Death of the Heart by Elizabeth Bowen

Although born after her parents' marriage, Portia was conceived during an extramarital affair between her mother and Thomas' father, which resulted in the breakup of the married man's first family. Now, both of her parents are dead, and Portia must go to stay with Thomas and his wife in London. She's a troubled girl, however, and her crush on one of her brother's business associates could cause major trouble for everyone.

We all know the story of Cathy and Heathcliff, but in the Me Too era, the crimes of Wuthering Heights' brooding, Byronic "hero" feel sinister, and rightly so. Emily Brontë's novel is primed for a new, honest adaptation this year.

The Waiting Years by Fumiko Enchi

This award-winning Japanese novel focuses on a single household in Meiji Era Japan. As feudal traditions disappear from Japanese life, the descendant of a samurai, Shirakawa, forces his wife to keep them alive and well. Over the course of the novel, the devoted Tomo facilitates the addition of several maids to her husband's home, all of whom are destined to become his live-in mistresses. In spite of their situation, the women forge deep and lasting bonds with one another in the old-fashioned household, as the world changes rapidly around them.

Their Eyes Were Watching God by Zora Neale Hurston

Zora Neale Hurston's famous novel was adapted into a made-for-TV movie starring Halle Berry in 2005, but many critics felt that the film failed to capture the novel's commentary on black women's realities in the early 20th century. Janie Mae Crawford is a woman coming into her full power in Their Eyes Were Watching God, and she deserves to have her story told on the big screen.

Home to Harlem by Claude McKay

The hero of Claude McKay's 1928 novel, Jake is a queer ex-soldier living his life on the rails as a cook aboard a passenger train. Home to Harlem is unlike anything you've ever read, and Jake's AWOL adventures would make an excellent new film for McKay fans new and old.

A prequel to Charlotte Brontë's Jane Eyre, Jean Rhys' Wide Sargasso Sea tells the story of Antoinette Cosway, a young Creole woman who finds herself married to a cruel and uncaring English gentleman. He renames her Bertha, claims she is mentally ill, and locks her in the attic of his manor house. Wide Sargasso Sea hasn't had a screen adaptation since 2006, and, as with Wuthering Heights above, the Me Too era has primed audiences for a new film version of this novel.

Arundhati Roy's debut novel is the heart-wrenching story of a family torn apart by laws dictating "who should be loved, and how. And how much." This poignant novel, which is full of angst, bitterness, and longing, has never been adapted, but its characters deserve their chance to shine on screen.

A memoir from Japanese-American author Monica Sone, Nisei Daughter tells the story of the author's family before, during, and after World War II. Moving from Seattle, where her father owned and operated a hotel, to the Minidoka internment camp in Idaho, and beyond, Nisei Daughter paints a portrait of an American family living in an environment of constant hostility and mistrust. At a time when racist violence and nationalism are on the rise, a film adaptation of Sone's story couldn't be more timely.

Though you may not have read it since you were a child, Johanna Spyri's Heidi makes for a timely re-read today. The book contrasts the eponymous heroine's idyllic life in the Swiss Alps with the constraints of big-city living in Frankfurt, Germany, and its lush depictions of the mountains and valleys force readers to consider the impact of climate change on the Alps. Heidi has seen many page-to-screen adaptations, but Hollywood hasn't tackled Johanna Spyri's novel in some time.

With 2019's Harriet winning multiple awards this season, readers and filmmakers should turn to The Narrative of Sojourner Truth. An abolitionist and Union Army recruiter, Truth has often been misrepresented in media, thanks to a re-written version of her famous speech, "Ain't I a Woman?," in an exaggerated dialect that the Dutch-speaking Truth would not have used. Now is the perfect time to give her an accurate version of her story on film.