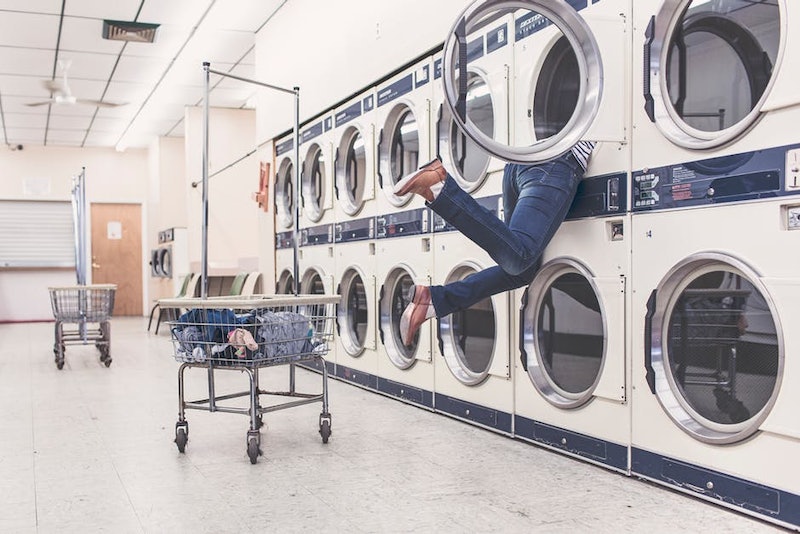 If you've been struggling with certain issues and intrusive thought patterns your whole life, you might not realize they're a sign of OCD. Add that to the fact symptoms of Obsessive Compulsive Disorder are often misunderstood , and it's really no wonder you — and so many other people — have been walking around unaware of their anxiety disorder.

The symptoms of OCD are often portrayed a certain way on TV and in movies. It's pretty common, for instance, for people to think OCD is all about craving orderliness and cleanliness. Or that it's simply a fear of germs. But if you have OCD, or even think you do, then you know it's all that — but also so much more.

"OCD is a brain disorder that is characterized by obsessions, compulsions, and feelings of anxiety," psychologist and radio host Dr. Joshua Klapow tells Bustle. "Thoughts enter the head ... and there is a level of anxiety that's present with them because they are intrusive." That's the "obsessive" side of things. But there's also the compulsions.

"The compulsions are the desires to take action to reduce the level of anxiety," Klapow says. "The action reduces the anxiety and the person feels better." But only for a moment. "The intrusive thought comes right back, leading to the compulsion to take action to reduce the anxiety. This creates a conditioned response and a set of very disruptive habits."

It's not uncommon for OCD sufferers to spend several hours a day completing anxiety-reducing rituals. But the disorder can show up in subtler, lesser-known ways, too. Read on for some daily habits that might be a sign of OCD.

1. You Check Your Locks Over And Over Again

OCD can make you doubt yourself, often to a debilitating degree. So if you can't leave home without double and triple checking the stove, the door locks, and the windows, take note. "It's OK to make sure you took care of everything before leaving the house, but if you check multiple times, this is a problem," says therapist Kimberly Hershenson, LMSW.

You also should be concerned if you have a habit of leaving home, and then heading back 30 minutes later to check the stove — again. This intense level of doubt can be a sign of OCD.

2. You Tap On Walls To Alleviate Your Stress

This one may sound so strange, but tapping is a pretty common ritual seen in people with OCD. You might feel compelled to tap your wall a certain number of times before leaving home. Or, you might reach out and touch telephone poles for "good luck" as you walk by. And if you don't do it all just right? Well, it might feel like you've cursed yourself with bad luck.

"Many people ... believe that something bad will happen to them or someone they care about if they do not fulfill a ritual or pattern," psychologist Dr. Nikki Martinez tells Bustle. "It is an anxiety based disorder, and these habits and rituals help us feel like we are reducing that anxiety."

3. You Try To "Fix" Things With Your Mind

If you have OCD, you might also feel compelled to "fix" things, or set them straight, in your mind. As Stephanie Parmely, PhD, of Mercy Medical Group says, you'll feel "compelled to fix things by using mental actions, such as repeating certain words or phrases silently, undoing a thought by thinking the opposite, [or having] difficulty not thinking about mistakes or potential mistakes." Such a ritual can make things feel OK for a minute or two.

4. You're Counting All Day Long

Parmely tells me you might feel compelled to count ceiling tiles, bricks, people, cars, or objects that you walk past. While it doesn't sound like a big deal, this compulsion can be so distracting and exhausting to the sufferer, often to a debilitating degree.

5. You Spend Way Too Much Time Cleaning

There's nothing wrong with wanting a tidy apartment, or religiously doing you dishes before bed. It's also OK if you want your books organized a certain way, of if you like your pillows just so. These are simply quirks, and not necessarily related to OCD.

You should take note, however, if your cleaning and tidying reaches an excessive and time-consuming level, Hershenson tells me. Or, if your routine seems to be fueled by obsessive worries of contamination.

6. You Have Dark Thoughts

Since OCD is characterized by intrusive thoughts, it's not uncommon for sufferers to think about death several times throughout the day. Or, to worry that they may have caused an accident. Have you ever driven to work, passed someone on a bicycle, and then turned around to check a dozen times to make sure you didn't hit them? As Parmely tells me, that's a symptom of OCD.

7. You Wash Your Hands A Lot

Hand washing only becomes a problem when you scrub your hands excessively or use scalding hot water, all in a desperate attempt to kill germs and prevent contamination. "Do you use hand sanitizer dozens of times a day?" Hershenson asks. Do you pull your sleeve down when you have to touch a door knob? Or when you have to eat food with your bare hands? It may be a sign of OCD, and it's certainly not something you should have to live with.

8. You Have Time-Consuming Rituals

In an effort to calm your obsessions, you might turn to time-consuming rituals as a way of feeling more balanced and in control of your anxiety. As psychotherapist Elise Franklin, LMFT says, you might "count or have rituals around stuff, like making sure to brush your teeth for exactly 2:05 minutes and if you lose count having to start over." It can be very frustrating.

Those who suffer with OCD often find themselves hoarding. As Paremly says, you might collect "jars, bottles, cans, string, rubber bands, scraps, building materials, newspapers, magazines, articles, or things found on the street." Or you might hang out to clothes, or old food. While it may look like junk to others, it's very much not junk to you. And, the thought of throwing it all away? Well, that might just push you over the edge.

10. You Worry About Contamination

It's not uncommon for those with OCD to take their rituals to the extreme, all in the name of easing a fear of contamination or illness. "For example, if I fear food poisoning ... I think about the cleanliness of my food for over an hour a day, every day," psychologist Dr. Michele Barton, of Psychology Life Well, tells Bustle. "The only thing that quiets those thoughts is washing all my food with soap ... This can become very time consuming and detract from other more important activities. This may also progress and manifest endlessly if not addressed."

11. You Worry About Your Health

We're all hypochondriacs, to a certain degree. But worries and fears can really get out of hand for people with OCD. As Candice Conroy, MA, LMHC says, you might check your "blood pressure, heart rate, or temperature to be sure you aren’t experiencing some health related catastrophe (such as making sure you’re not having a heart attack)."

Remember, OCD is a debilitating and time-consuming disorder. If you recognize any of these habits and symptoms in yourself, don't be afraid to reach out to a therapist. There are coping strategies and plenty of ways to give you some relief.