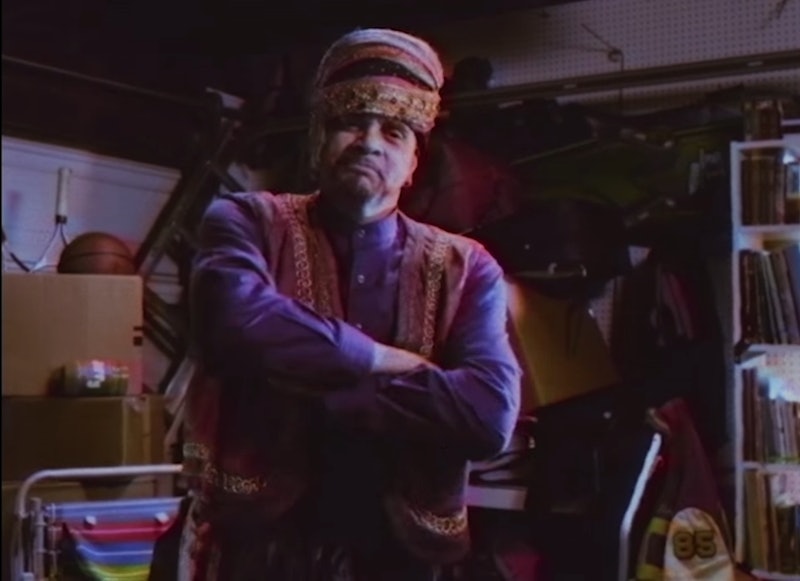 It is safe to say, Sinbad and CollegeHumor owned April Fool's Day 2017. The comedian teamed up with the humor site to produce Sinbad's fake genie movie, Shazaam. Now, a legion of redditors and many '90s kids swear the movie exists, but Shazaam never happened. At least not in this universe. However, now at least two minutes of Shazaam is real and chock full of Mandela Effect easter eggs.

For the uninitiated, The Mandela Effect refers to shared false memories, and its name comes from a false memory many people have of the great Nelson Mandela dying during his imprisonment in the '80s. Mandela actually went on to serve as President of South Africa from 1994-1999, and did not die until Dec. 5, 2013. For some of those who subscribe to the Mandela Effect, all of these shared memories of events that never happened or movies that never existed are evidence of an alternate timeline or universe.

Whether you are intrigued by the fallibility of human memory or curious about why so many people misremember the same things, the Mandela Effect is fascinating, and if you are at all familiar with the idea, the Shazaam clip is a treasure trove of in-jokes. Aside from Sinbad finally bringing a character so many fondly remember despite him never existing to life, CollegeHumor packed the two-minute clip with fake commercials and nods to pop culture fallacies.

Here are all of the Mandela Effect easter eggs you may have missed in the Shazaam clip. Fair warning, you are about to question everything you thought you knew about your childhood.

Curious George had a tail, right? I mean, how else was that mischievous monkey going to swing from trees? Well, I am sorry to be the one to tell you this, but he was always tail-less, except in the Shazaam universe.

While it's not as a famous as some of the other Mandela Effects out there, a surprising number of people believe the Rubik's Cube was once known as the Rubix Cube.

That dash on the KitKat wrapper hanging from the box is another example of collective memory failure. KitKat has always been spelled without a hyphen.

4. The Monopoly Man And The Case Of The Disappearing Monocle

Chances are you remember Rich Uncle Pennybags, better known as the Monopoly Man, having a monocle. Sorry, guys, but the Monopoly front-man never sported the snazzy eyepiece.

If you look behind the kids, you will see a portrait of King Henry VIII holding a turkey leg in his hand. Despite this image being widely associated with the former King of England, there is no portrait featuring him preparing to snack on a turkey leg.

6. Where Is New Zealand?

Everyone knows where New Zealand is in relation to Australia. Or at least they think they do. The map next Sinbad is a nod to all the people who are certain New Zealand has moved.

On the box behind Sinbad, there's a jar of what appears to be Jiff peanut butter, a brand Mandela Effect believers are convinced was once called Jiffy.

It's Froot Loops, guys, despite what the Shazaam commercial break may tell you.

No matter how much you believe they were the Berenstein family, your favorite childhood series was actually The Berenstain Bears. Given how popular this Mandela Effect is, it's no wonder it made its way into the clip.

Was Carmen Sandiego's coat yellow? Nope, it was red, but you can hold onto this sneaky clip slipped into Shazaam as evidence to the contrary if you want to.

It wouldn't be an ode to the Mandela Effect if there wasn't a reference to Mandela. A carefully placed newspaper is the clip's biggest giveaway that Shazaam clearly takes place in the Upside Down.

Stand in awe of Sinbad and College Humor, because they truly made a Mandela Effect masterpiece for April Fool's Day.