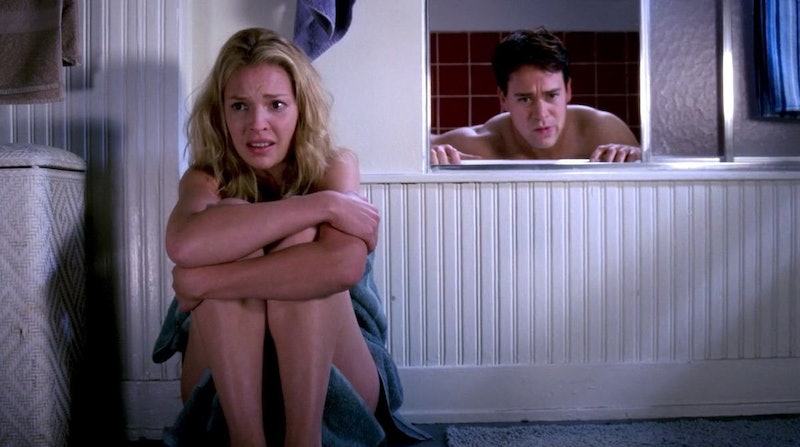 With more than two dozen main characters over the course of 15 seasons and 300+ episodes, there have been a lot of hookups, breakups, romances, and weddings on Grey's Anatomy over the years. But not every Grey's Anatomy couple was created equal: for every MerDer, Calzona, and Japril, there has also been a Gizzie, shudder. (Even their 'ship name sounds gross, doesn't it?)

That's completely understandable, given the sheer amount of story being told over the course of a decade and a half; not every pairing is going to be a rousing, spark-filled success. But while some couples were intentionally never built to last (sorry, but you were always going to be a runner-up, McVet), others were so unintentionally bad — whether because of the writing or the chemistry between the actors or the frustration of keeping two other characters apart — that they made audiences actively root for the dissolution of the relationship.

While viewers sobbed their way through some rough Grey's breakups over the years, here are the breakups that probably had most fans secretly cheering… or not so secretly, tbh. (My apologies in advance if you're a weirdo who shipped Ghost Sex or Penny, they were objectively bad and I don't know what to tell you.)

Not only did the redheaded nurse end up giving George the syphilis that Alex gave her, but their relationship terminated in perhaps the most excruciating breakup line in television history. "I like you, Olivia. I just don't like you enough." Woof.

Remember Callie O'Malley? Everyone — characters and audiences alike — new it was a bad idea when the intern and the ortho surgeon eloped to Vegas... and it wasn't fun for anyone to watch Callie pine after George while George pined after Meredith. Pass.

A great friendship was ruined when Izzie decided that she had feelings for George after he got married. George cheated on Callie with Izzie, leading to the dissolution of his marriage. But when "Gizzie" finally made of a go of it after his divorce, the chemistry just wasn't there. Sucks to lose to a loser, Callie.

(Yes, a disproportionate number of these relationships involve George. Thankfully George and Meredith's one-night-stand doesn't count as a "relationship" so we don't have to remind ourselves of that travesty. Oh wait, too late, my bad.)

While some stalling tactics work (McVet was sweet and distracting even if we all knew it would never last), others just don't. Case in point: Derek's dalliance with this bland scrub nurse, who viewers all knew was just a temporary road block to the inevitable MerDer reunion. Indeed, the writers did the relationship no favors by making Rose a bitter shrew post-breakup who sliced Derek's hand with a scalpel.

Sure, the revelation that Izzie was hallucinating her dead fiancé because of cancer that had metastasized to her brain was a great twist... but was it really worth half a season of ghost sex to get there? (Answer: No it wasn't.)

Remember Lucy? No? Bueller? Here's a brief refresher: she appeared out of nowhere in Season 7 to supervise Callie's pregnancy, then she stole her boyfriend Alex's job at the clinic in Africa, and disappeared as quickly as she came. Not exactly a match made in heaven.

Hahaha remember when Derek died and then Callie started dating the doctor responsible for his death and hilarious hijinks ensued? Just to ensure nobody would ever like Penny, the writers also made her the reason Calzona never reunited, making Callie leave Seattle and move to the Big Apple with her. Boo hiss.

If the writers thought they would recapture the Calzona highs with this character... well, they thought wrong. Minnick immediately — what's the opposite of "endeared"? — herself to viewers by butting heads with Richard, and then bogged Arizona down in a passionless relationship. When she just wasn't there anymore at the beginning of Season 14, fans rejoiced.

Maybe, just maybe it was too soon to pair Meredith up with a new love interest just one season after Derek's death. The writers tried their hardest anyway, shoving Dr. Grey together with this new doc, but it was doomed from the beginning. Neither audiences nor Ellen Pompeo herself ever warmed to the pairing, with the actress publicly critiquing the plot development. "Are you people f***ing nuts?" she said of the writers' decision in a Hollywood Reporter interview.

I could write a whole article about why Maggie and Jackson are so wrong for each other. Oh wait, I already did. (Spoiler, the first and last reasons are both the same: they are siblings.)

Again, apologies if you ever rooted for any of these pairings but also you were wrong. Grey's is better off without any of these couples taking up precious screen time. RIP Gizzie.