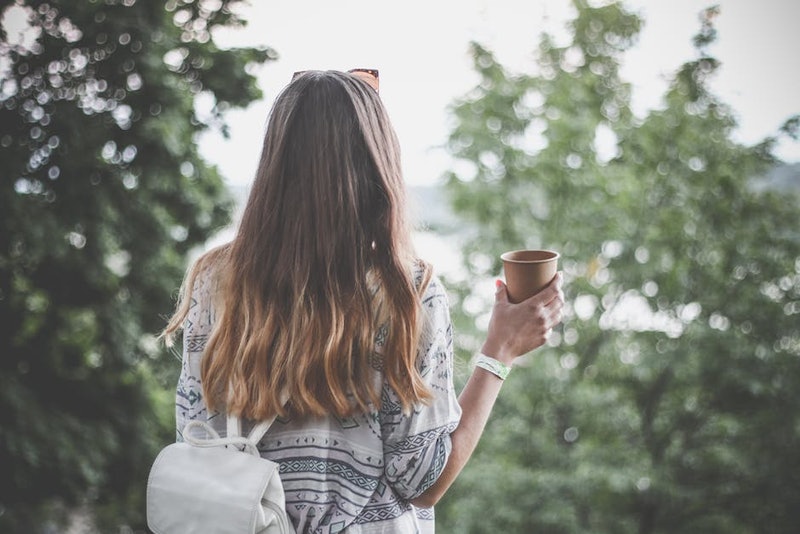 Anger is a healthy emotion that everyone has, so you certainly shouldn't feel bad about yelling and letting it all out. It's important to feel feelings and to let other people know when you're upset. That doesn't mean, however, that you want your anger to get out of control.

A true anger problem can negatively impact your life, which is why it's a good idea to look out for signs things have gone too far. "The biggest key to managing anger is awareness," Dr. John Schinnerer, an anger management expert in Northern California, tells Bustle. "Without awareness, we get angry, and then become aware of it after the fact. This is a recipe for disaster." Unchecked anger can get you in trouble at work, affect your relationship, and even impact your health.

So, what can you do about it? "Some positive ways to deal with anger are first to build awareness around what triggers the anger," says Colorado-based therapist Rebecca Frank MA, LPCC, NCC. "When we can start linking the triggers to the emotions we can control our situations a little better, which can decrease the number of times in a day that we become angry."

You can also work on regulating your breathing. "Your breath controls your heart rate, blood pressure, and your body's response to stress," Frank says. "Square breathing is an effective way to allow your body to slow down. [To do it,] breathe in four counts, hold four counts, breathe out four counts, and hold four counts. Repeat the cycle until you feel your body slow down." Read on for some signs it may be time to incorporate more calm into your life.

Getting pissed off occasionally? Totally OK. But if you lose it over little things every day, you might have an anger problem. "[You] might overreact or blow up for inconsequential issues," gestalt life coach Nina Rubin, M.A. tells Bustle. "For example, if a roommate forgets to unload the dishwasher, [you] might speak angrily and use hyperbole and vitriolic language." You might also road rage or yell when you can't find your phone, which are all signs anger has gotten out of control.

2. You've Been Known To Hold A Grudge

Again, anger is a healthy emotion and we all feel it. But it should really only flare up for a moment before simmering back down again. "Emotions are only supposed to last minutes," Schinnerer says. "Often, we hold onto them for much longer than this. So one tip off is when you are holding onto your anger for hours, days or longer (often called a grudge)."

3. Things Can Get Pretty Intense

You don't just get mad, you get mad. In regards to anger management, this is what's known as "intensity," and it's a good barometer for judging an anger problem. "Intensity is how high ... your anger [gets] on a one to 10 scale with one being calm and 10 being enraged," Schinnerer "Most people can manage their anger before it gets to a five on that scale." So take note if you consistently can't.

4. You Get Mad Pretty Much Every Day

Another way to measure an anger problem? Frequency. "Frequency speaks to how often one gets upset," Schinnerer. "Is it once a week? Once a day? These are all dimensions along which we can improve in terms of managing our anger." You know, all in the name of feeling better.

5. You've Been Pushing Friends Away

If you've been extra angry lately, your friends may be less inclined to call. But it's also normal for people with anger issues to push their friends away. As Frank tells me, it's quite common to go into a sort of isolation — usually due to feelings of frustration and overwhelm.

6. You Have A Tendency To Yell

If you truly can't control your anger, it may be a sign of a problem. "If you are getting to the point of being physically or verbally abusive, this is indicative of an anger issue," Schinnerer says. Nobody wants to feel that out of control, so take this as an opportunity to make a change.

7. Your Heart Races And You Get Sweaty

Do you get emotional and then feel kinda sick? "There are physical signs ... such as sweating, red face, heart racing, and shortness of breath," Frank says. If you get this way on the regular, it may be time to look for ways to calm down.

Anger takes a lot of you, so don't be surprised if you feel tired, too. As Frank says, "People will typically find themselves tired, overwhelmed, and unhappy because the anger overwhelms them." Have you been feeling depressed, too? If so, it may be time to seek help.

9. You Spend A Lot Of Time Apologizing

As I said above, it's tough to be friends with someone who's angry all the time. So take note if your loved ones seem to be pulling away, or if you spend most of your time apologizing for being mean. As Frank tells me, you might feel like you're spending more time repairing relationships than maintaining them.

10. You Can't Help But Be Defensive

If people constantly say you're being defensive, take note. "Individuals struggling with anger often have trouble seeing the big picture, so to be called out for their anger will often make things worse," psychotherapist Jessica Meiman tells Bustle. "Defensiveness is a very common sign of anger, and often deeper painful emotions like sadness or grief."

11. Your Memory's Been A Bit Fuzzy

Anger affects the very nature of your brain, so be on the look out for any signs of cognitive issues. These will be all thanks to spiked levels of cortisol, which Frank tells me can cause memory problems, as well as issues creating new memories.

When it gets to that point, it's more than time to take better care of yourself either by identifying your anger triggers, practicing deep breathing (or other relaxing activities), or even seeing a therapist. I promise you'll feel so much better once you do.

More like this
21 Signs You're Not In Love Anymore
By Sara Altschule, Kathleen Ferraro and Carolyn Steber
3 Zodiac Signs Most Likely To Be The Center Of Attention
By Nina Kahn
These 4 Signs Are The Seductive Sirens Of The Zodiac
By Brittany Beringer
These 4 Signs Are The Sarcastic Jokesters Of The Zodiac
By Brittany Beringer
Get Even More From Bustle — Sign Up For The Newsletter