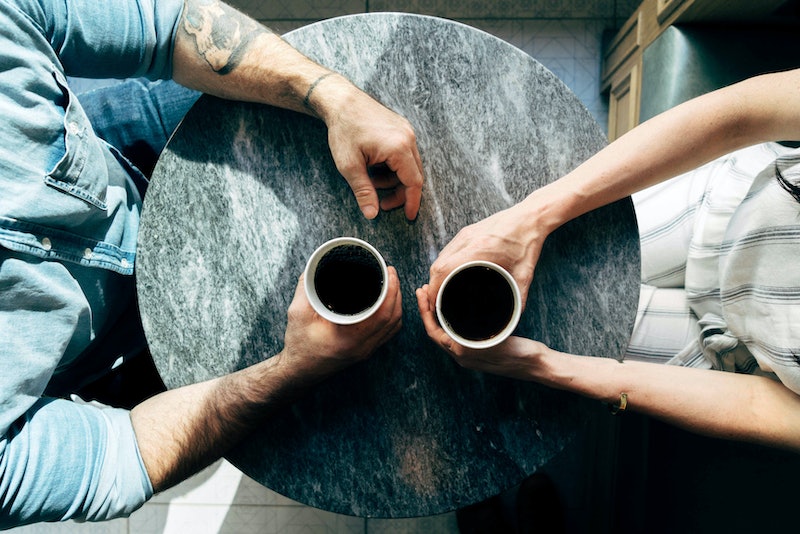 After an argument, it can be difficult to figure out how to offer a sincere apology. You're angry, your partner is angry, and the last thing you want to do is talk to them, admit your faults, and say "sorry." But after you've both had a moment to relax, it is incredibly important to talk it out and apologize — especially if you want to avoid more fights in the future.

Apologies not only open up communication, which is important in any healthy relationship, but they also allow all involved to make some changes. Once everything's aired out, you can both go forth into the relationship knowing how to treat each other and how to better handle fights.

What's even cooler? Apologizing can also be helpful in figuring yourself out, too. "Apologies can help you grow as a person because they shed light on behaviors you are engaging in that are not helpful to you or others," NYC-based therapist Kimberly Hershenson, LMSW tells Bustle. "Hearing the other person out and what their needs are after you apologize will help bring awareness to your actions and avoid future arguments because you will think twice about reacting in a similar way again." While relationships are obviously a two way street, it never hurts to know how to apologize, or avoid future fights. Read on for some ways to do just that.

Even though it can be tempting to stalk off and ignore each other, it's so important to keep the lines of communication open. "Talking through the situation is best because letting the situation linger can develop into feelings of neglect, disrespect, or even anger," licensed professional counselor Felicia Pressley, PhD tells Bustle. "At the end of the day, people usually just want to be heard." So sit down with your partner and talk it out.

Sure, you can offer a blanket apology and move on. But it's much for affective to state what, exactly, you're apologizing for. "Apologies are more effective if they are specific," relationship expert David Bennett tells Bustle. What started the fight? What was said that was hurtful? Lay it all out on the table.

3. Ask What You Can Do Differently

Obviously it's up to both of you to make changes, but it never hurts to ask how you could contribute to the overall wellbeing of the relationship. As Bennett says, "Find out what changes or modifications would help the other person. This is not to say you can always deliver those changes, but it gives you an idea of how to change the behavior in the future."

4. Own Your Part In The Argument

It's impossible to truly apologize without acknowledging how you might have contributed to the problem, so go ahead and own it. "It's hard to do this but powerful in stopping the fight immediately and opening up conversation," therapist Thai-An Truong, LPC, LADC tells Bustle. Tough, but worth it.

This is another one that's tough to do when emotions are running high, but you gotta try. Truong suggests saying things like "I can see how that was hurtful" or "I can see why you're pissed." Once your partner feels validated in their feelings, they'll be more likely to talk calmly and openly — and better able to accept an apology.

Ever notice how some people don't listen, but only wait for their turn to talk? This annoying habit often turns up a few notches during an argument, so make sure you both actually listen. "Listen to just listen and understand. Not to respond," Truong says. "I know this goes against every grain of your being, but who doesn't want to feel heard?"

Whatever you do, don't bring up that annoying thing that happened five years ago — no matter how angry you feel. "Stick to the issue at hand," says executive coach Kim Halsey, MA, SPHR. "Don't drag up old hurts, resentments, or arguments to build a case." It'll only keep the fight going and make apologizing impossible.

8. Be As Sincere As Possible

For an apology to truly work, you kind of have to be sincere. So pay attention to what you're saying and any feelings that may crop up. "Are you sorry that you were fighting? Say so. If you wish that the conversation had gone differently, share those feelings," says life coach Erica B. McCurdy. "By staying sincere, you avoid bringing dishonesty into a relationship that is already feeling tension."

If you truly want to apologize, sit down with your partner and be real about it. "Look the other person in the eyes," licensed marriage and family therapist Melissa Divaris Thompson, LMFT tells Bustle. "Having eye contact can soften our instincts to our primordial ‘fight or flight’ response." This will calm you both down and allow the chance for everyone to be heard.

I know, it's tempting to make an excuse to save face or defuse an argument. But coming up with excuses often only makes things worse. "When you make excuses for your behavior, it cheapens the apology," says Thompson. "When you insert your own story, you shift the focus from the other to yourself. It no longer becomes a moment of connection and repair; rather it serves as an opportunity for you to lessen your own guilt or defend yourself." Not cool.

Once you apologize, let yourself move on. "It is important not to over-apologize, and only do so when it is appropriate," Bennett says. "If you apologize for every little thing, not only does it come across as unattractive, it lacks value."

So sit town with your partner, say it like you mean it, and then make a point of doing better in the future. If you do, you two will be better be able to avoid fights in the future.