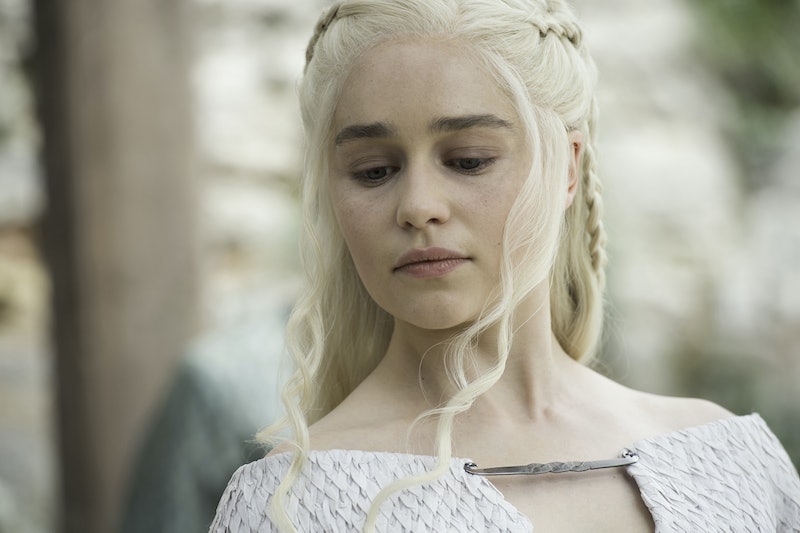 There is only one Game of Thrones character I truly believe would rule Westeros both fairly and fiercely, and that is the reason why Daenerys should win the Iron Throne. Well, it's one of the reasons. The Dragon Queen has long been the most obvious contender to take the Throne, but for good reason. Daenerys has fought for every scrap of power she possesses. Her ascent to the top was preceded by an arduous journey, and she still has to dispatch one more pretender to the Throne before she can take what is hers by right.

As a Targaryen, Daenerys is a symbol of Westeros' past, but she's also an example of the kind of future the Seven Kingdoms could have if they stopped clinging to the old ways. The Mother of Dragons once told Tyrion, "I'm not going to stop the wheel, I'm going to break the wheel." It's that burning desire to redefine what it means to be a ruler that makes her the only person for the job.

If there is an Iron Throne left for someone to sit on after Cersei and the White Walkers get through with it, then the only person who should claim it is Daenerys Stormborn of the House Targaryen, First of Her Name, the Unburnt, Queen of the Andals and the First Men, Khaleesi of the Great Grass Sea, Breaker of Chains, and Mother of Dragons — and here are 11 reasons why.

1. She Cares About The People

While most of the people who have sought to rule Westeros want power for the sake of power, Daenerys cares and protects all those who are weak, in need, and who cannot fight for themselves. Her compassion is real, and it makes her a stronger leader than most.

2. She Walked Through Fire (Literally)

This is a woman who has walked through fire on more than one occasion and came out unscathed. Her gift for survival against all odds seems to point to a larger purpose.

Under Daenerys' rule, the old ways of Westeros would crumble and give way to a world where the worth of women, the poor, and those who are discriminated against by society, like Tyrion, would be valued.

4. She's The One With The Dragons

Daenerys inspires loyalty in even those who stopped believing in anything long ago — like Tyrion and Ser Jorah.

6. She Chooses Her Duty Over Love

First, Daenerys walked away from the fantasy of Khal Drogo and her son, and then she left Daario Naharis behind at the end of Season 6. Her focus is on being the best queen she can be, and that's vital.

7. She's Not Afraid Of Conflict

If you hurt her, those who follow her, or any innocent in general, Daenerys will unleash the wrath of the dragon on you. Her willingness to do whatever it takes to protect her people makes her the clear heir to the Throne.

8. She Has Fought Harder Than Anyone Else

Daenerys was banished from Westeros when she was just a baby. She has fought for every single one of those titles at the end of her name, and her perseverance alone should prove she's the queen Westeros needs.

You may not always agree with her methods, but Daenerys tends to be incredibly fair, whether she's ensuring the punishment fits the crime or appointing leaders in her army.

10. She Takes Council From Others

While she knows that the hard decisions fall on her shoulders, Daenerys is wise enough to surround herself with people who can advise her in the things she doesn't know. Having the wisdom to listen to others is the hallmark of a true queen.

11. The Iron Throne Is Hers By Right

Sorry, Jon Snow, your dad may have been a dragon, but you're a wolf through and through. Daenerys is a true Targaryen, and the Iron Throne is her birthright.

Only one person can sit the Iron Throne, and my vote will forever go to Daenerys.