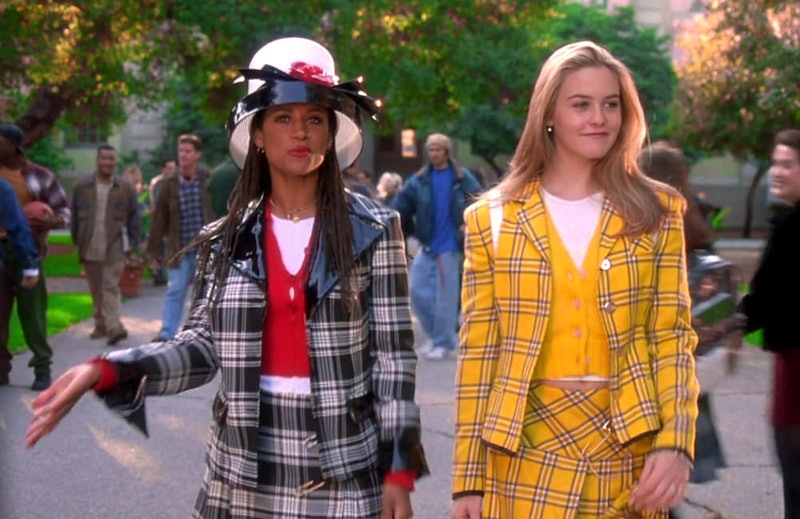 The '90s were a time of earnest introspection, but that doesn't mean there weren't things extroverts did in the '90s as well. Some of culture's most famous extroverts had their "moment" in the '90s: Courtney Love, Drew Barrymore, Romy and Michelle, the Spice Girls, and Cher and Dionne, to name a few. There was great inspiration for being an extrovert in the '90s, and despite all the Kevin Smith, Richard Linklater inward existentialism, there sure was a lot of hair mascara and butterfly clips going around. I can basically hear all the '90s extroverts shouting "Don't have a cow, man!" in unison.

Being an extrovert in the '90s meant your unbridled enthusiasm didn't match up with a lot of the culture. While you appreciated the grunge movement and Daria, you were more than likely making audition tapes for reality TV shows or leading your gang around the mall, flirting wildly with your crush and wearing the most amazing crimped hair styles and side pony tails known to man. If you were like me, you probably dressed and acted like Pippy Longstocking a lot — in public, too. Here are 11 things extroverts did in the '90s, because the era wasn't all about apathy, sarcasm, and stay-at-home witchcraft (although all those things were pretty cool).

1. Had A Spice Girls Tribute Band Where You Were Basically Anyone But Posh (Although Let's Be Real You Were Mostly Ginger)

A lot of '90s kids were in Spice Girls tribute bands, but you pretty much ran yours. You were anyone but Posh, although also probably not Baby. You were mostly Ginger, although some of you might have been Scary or Sporty. You loved shouting "Girl Power", laughing loudly, and wearing the brightest clothes and highest platform sneakers known to man.

2. Made Audition Tapes For The Real World

You might have been too young to actually be on The Real World, but that wasn't going to stop you making audition tapes on your parents' camcorder. Forget leaked sex-tapes: your Real World audition tapes are the one thing you hope NEVER leak.

3. Twisted Your Hair Into A Whole Elaborate Wormy, Spiky Thing, Then Filled It With Glitter And Hair Butterflies

Your head was a fun explosion. You name it, it went in there. Glitter spray, hair mascara, Sun-In, butterfly clips, hair wraps, scrunchies, topsy-tails: your hair was a constant experiment in product, style, and elaborateness.

4. Got In The Middle Of The Circle At School Dances, Alone

The circle in a school dance was horrifying for most, who wouldn't dare dream of dance in there alone. But you were different. You'd jump right in and do your best robot as the crowds clapped and cheered.

5. Led A Gang Of Friends Into All Kinds Of Fun Situations

Extroverts were leaders in the '90s. You'd be the one organizing your friends to go to the mall, sending notes to crushes, and starting Babysitter's Clubs. If there was a harebrained '90s scheme, you were behind it.

6. Went As Romy & Michelle (With An Extrovert BFF Of Course) At Halloween

7. Finished At Least One Class Presentation With "There Is No RSVP On The Statue Of Liberty"

Maybe you didn't totally get what it meant, but when you said it, everyone knew what it said about you: bold, fearless, loud, and not phased about throwing random Clueless paraphrasing into class presentations.

The outfits on Empire Records weren't for the faint hearted. Super mini skirts that took serious dexterity to wear, combat boots and fluffy sweaters. Just another day in the life of a '90s extrovert.

9. Treated Every High School Milestone Like A Cinematic Experience

In your mind everything was a 10 Things I Hate About you dance-on-the-table moment, or a scene out of Dirty Dancing. In your head, and the way you carried yourself outwardly, everything was so cinematic.

10. Tried To Get Yourself On A Really Great "Losing My Virginity" Adventure

There was something about an epic "losing virginity story" in the '90s. You made it your personal mission to have a shenanigans heavy experience.

Everyone knew that when you threw a slumber party, you meant business. You had the best activities planned, snacks ready, and VHS movies ready to go. And you'd ALWAYS be the one to say "Candyman" three times into the mirror. Always.