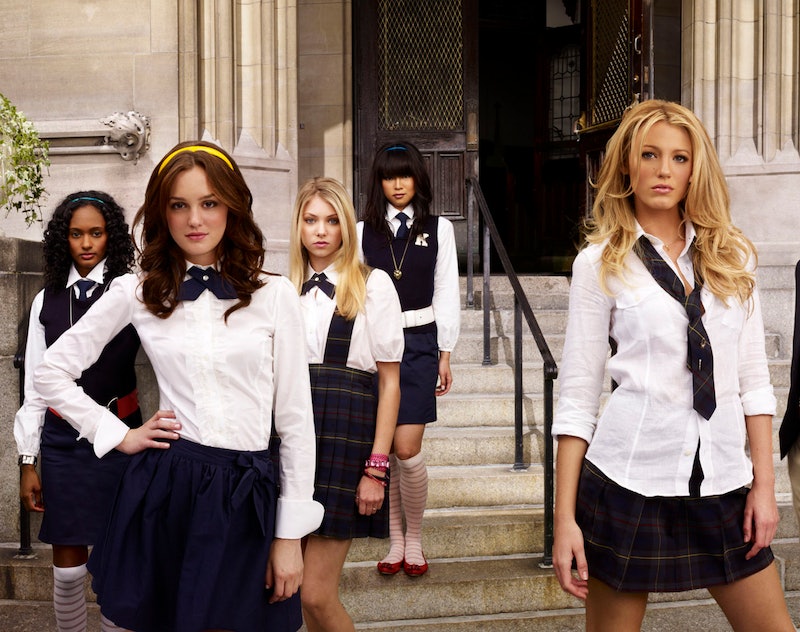 Once upon a time, Monday nights meant one important ritual: abandoning all life priorities and tuning into Gossip Girl. If you too worshipped the religion of Gossip Girl, then you would understand its potent force in the fashion realm. While we craved for a taste of the scandalous lives of Manhattan's elite, we also lusted for another important component: the show's wardrobe. Admit it: Gossip Girl influenced your shopping habits one way or another. I, for one, am guilty as charged.

It is extremely difficult to watch an episode of GG and *not* catch yourself Googling things such as, "Serena season two white chiffon dress" or, "How to buy everything in Blair Waldorf's closet on a college student budget." Gossip Girl was the ultimate fashionista fantasy, and it was most likely the reason our bank accounts went south (oops). After all, if B and S wore it, then by default, we all needed it too.

From Blair's Audrey Hepburn-esque ensembles to Serena and her Kate Moss 2.0 threads, no character was immune from the powers of GG-hungry shoppers. I remember 15-year-old me desperately wanting to re-create the Constance Billard uniform at my suburban public school in California — to me, the uniforms were "exotic" and the epitome of "East Coast preppy chic". Or the time Serena carried a Balenciaga and thus I deemed the Balenciaga City Bag as my dream designer handbag... need I go on?

At one point or another, every GG enthusiast had a brief love affair with headbands à la Queen B. From the preppy bow to silk scarfs or elegant pearls, Blair made her iconic hair accessory a staple of the Upper East Side dress code. Take note and repeat.

Ah, the Constance Billard uniform — somehow sexy, somehow PG at the same time (and don't even get me started on the unhuman things Chace Crawford in a blazer and tie does to me). Chances are, you tried to nab a slice of the NYC prep school scene with the quintessential plaid skirt. Make it Waldorf-approved with a tailored jacket and knit tights or go the van der Woodsen route with a shaggy cardigan and knee-high boots.

Superman wouldn't stand a chance against the sartorial powers of Blair and Serena. That being said, a chic cape makes for the ultimate weapon of destruction. The Blair Waldorf cape method called for rich jewel tones and tartan, plus a beret for good measure. The Serena rendition was all about burgundy and creams with shearling accents. Either way, file under Must Buy ASAP.

Black tights are so yesterday — or so at least, in Blair Waldorf's world they are. In fact, colored tights was most likely an unspoken component of the Constance Billard/Blair's Minions aesthetic (and the brighter, the better). I have always envied Blair's ability to pull off the signature red tights — and let us not forget that she can also do sleek white and blue sheer tights. All hail Queen B.

In the mortal world, old tees can pass for pajamas. But in the commonwealth of Gossip Girl? Outlawed. Think velvety robes, dreamy babydoll dresses and a healthy serving of lace. Leave it to B and S to make bedtime look like a boudoir photoshoot.

I'm sorry, but you can't radiate the Serena van der Woodsen essence without the over-the-knee boot — AKA the choice footwear of every "It" girl. Serena rocked them on every occasion: school, glamourously exiting out of cabs, storming the streets of the concrete jungle.

I blame Gossip Girl for the short-lived tie trend at my middle school. Thanks to Serena and Jenny, the traditionally masculine accessory was given the "cool girl" treatment — and it did wonders. Suddenly, black ties became the norm with casual tees and button-ups.

Before fishnet became a modern day craze, Jenny Humphrey — post style evolution — made them a daytime hit. Armed with a killer moto jacket, rockstar tresses and smokey eyes, Jenny nailed fishnet tights to the core. I don't know about you, but I'm all for team goth Jenny over prim and proper Little J.

ASOS All Over Sequin Cowl Back Maxi Dress, $151, ASOS

I still remember it like it was yesterday: seeing Blair in a champagne sequin Jenny Packham gown and *almost* suffering an exisistential crisis (and naturally, Kate Middleton would later follow suit). Gossip Girl certainly has no shortage of glitter goodness. Everyone from Serena to Jenny and Georgina Sparks had their sequin fix through frocks, skirts and clutches.

It's been five years since the show ended, but I'm still sitting here wondering how it was humanely possible that Blair and Serena wore the most stylish coats and didn't freeze to death? We're talking about a NYC winter, after all. No matter the temperature, B and S always seemed to be on a rotation of tasteful outerwear, from polished A-line coats to flowy trenches. Apparently, no puffy ski jackets for them.

11. Basically Every Outfit From The Paris Episodes

History was made when Gossip Girl crossed overseas to Paris in season four — City of Lights, City of Romance and of course, City of Sartorial Dreams. Who even cares about Prince Louis when you've got a cherry print Moschino number, a sparkly Gucci blazer and infinite amounts of Ladurée macarons? Magic happens when you mix New York sophistication with Parisian flair.

It's hard even now not to want to buy everything on the show — and to re-watch every season in its entirety. That too.