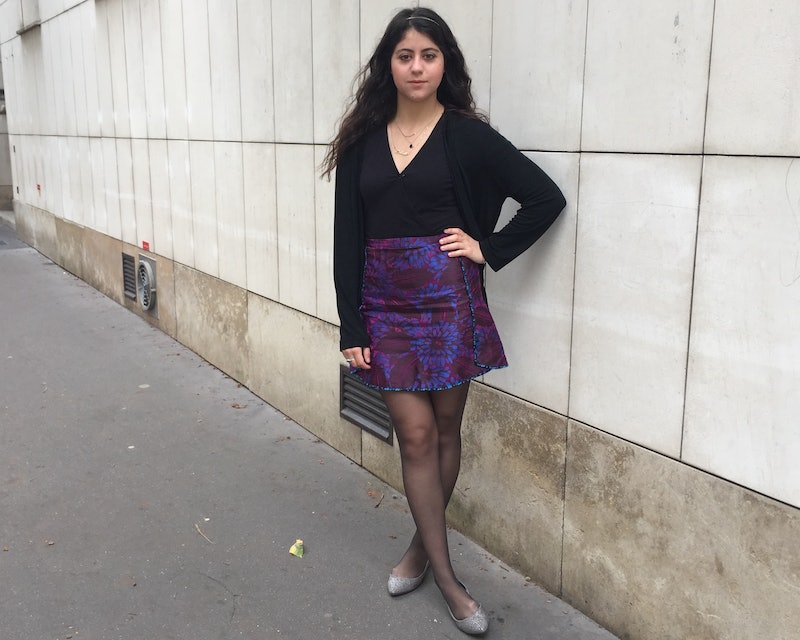 If there was ever a Gossip Girl character who was consistently chic, classically stylish, and arguably inimitable, it'd be Blair Waldorf and her style. As a fan of the series, and an even bigger fan of Queen B, I took it upon myself to wear Blair-inspired looks for a week. Seemingly attempting the impossible, I chose to recreate (and put my own spin on) a few of Waldorf’s classic outfits from the show, documenting what it was like to get dressed with the Upper East Sider’s preppy, feminine, and chic aesthetic in mind.

As anyone who is familiar with Blair likely knows, her amazing style consistently stole the show. Even among confusing plot twists (aka Serena’s whole persona) and weird relationships (let’s not reminiscence on that Chuck and Jenny moment from Season 1), Gossip Girl was always entertaining in part because the fashion was so seriously on point. And if there was any character whose look was on-trend, covetable, and totally true to the books, it was Blair. From the brightly-colored floral dresses to the tailored blazers embellished with brooches and scarfs, B's chic style was, and still is, totally covetable.

Clearly, I have a style crush on Blair Waldorf. So I thought it high time to try my hand at her signature look. While my recreations could never compare to the original ensembles themselves — I simply don't have the budget — emulating Blair in all her style glory was quite the experience. And let me tell you, it’s not always easy being Queen B.

Let's throw it back to the pilot, shall we? If it weren't for the yogurt throwing and the fact that the place was fictional, I would definitely try to attend the Constance Billard School For Girls. Instead, I settled for simply dressing like I attended the school, á la Blair, of course.

I had a fitted skirt and a button-down blouse in my closet that I thought fit the Constance Billard uniform quite well. I tucked the blouse in, pulled the skirt to my waist, and threw on a pearl-embellished headband for good measure. Had it been winter, I would have totally thrown on some tights and a pea coat. But for a summer uniform, this ensemble screamed Blair.

Day 1 went pretty smoothly, to be honest. I felt stylish, on-trend, and like a luxe private school girl. The look was comfy, and I was pretty pleased with the way this experiment was starting out.

Ahh, the classic LBD. Could we expect Blair Waldorf to slay in anything less? Nope, didn't think so. I chose to emulate this look from Season 6 because it's a classic style, practically foolproof, and stunningly gorgeous (especially with some Waldorf touches).

Admittedly, pulling off the LBD look with Blair as inspiration was harder than I thought. I grabbed my favorite silk mini from my wardrobe, similar to Blair's with its short cut and ruffly skirt. While I didn't have pearl necklaces at my disposal, I did get to wear a pearled headband and accessorize with a studded belt. I couldn't spot her shoes in the scene, so I defaulted to some basic black sandals.

Day 2 was definitely a wake up call. I thought this experiment was going to be easy, and that I would just throw on the classiest, most luxe pieces I could find, put on a headband, and go. Alas, I realized Blair's style was a lot more complex and detailed than I previously thought. That said, I was ready for the challenge to continue.

One thing I noticed while scrutinizing Blair's style for this experiment was that she's often seen onscreen in lingerie. If you've watched the show, that probably comes as no surprise. Between all the love triangles, we were bound to see Ms. Waldorf in La Perla and Agent Provocateur slip dresses. While I wasn't about to walk around in lingerie for a day, this look did give me an idea.

My life doesn't feature constant love triangles between princes and hotel heirs, unfortunately. But I, too, feel confident and sexy in lingerie and lingerie-inspired pieces. So I grabbed this lingerie-style tank top from my closet and dressed it up the Blair Waldorf way: With fitted trousers, a sleek blazer, and statement-making heels.

While my outfit for Day 3 wasn't an exact interpretation, following Blair's lead with sexy lingerie and making it wearable for the afternoon gave me confidence and certainty I usually don't have. Since Blair was always the epitome of fearlessness and tenacity, I considered Day 3 and my lingerie-inspired outfit a success.

If Blair Waldorf were a piece of clothing, she would definitely be a floral dress. Out of all her outfits in the series, the floral dress was amongst the styles she wore most often, so I decided it was a must for this experiment. The look I channeled was from the Season 4 premiere when Blair and Serena dashed off to Paris to escape the Gossip Girl drama.

I did just recently travel to Paris, but being the American tourist that I am, I basically defaulted to T-shirts and leggings during my stay. However, I channeled Blair's Parisian look with a floral dress of my own paired with platform heels, and I just pretended I was waltzing around Paris' world class museums and casually falling in love with a prince in front of a classic Manet painting.

Again, I don't have Hermes purses and diamond-embellished belts at my disposal like Blair does. If it were up to me, I would have dressed down a feminine piece like this one with a cardigan or sneakers. Playing up the pretty pattern with stand-out accessories made me appreciate the floral dress in a whole different way.

Being the Upper East Sider she was, it should come as no surprise that one of Blair's hobbies was horseback riding. Or, at least, dressing like she was horseback riding while instead devising cruel rumors to spread to Gossip Girl in order to bring so-and-so down the social ladder. But let's not get too off topic.

I wore a green jacket and black fitted pants just like Blair did, and paired the look with fitted suede boots and a golden headband. I unfortunately didn't have the scarf or the hat to match with my look, but I thought my ensemble captured Blair's essence quite well.

Despite being someone who has never ridden a horse nor been a fan of the equestrian look, I quite liked Day 5's sleek riding outfit. It was practical and comfortable, and that was a delightful surprise. Since, well, I can't really say that for most of Blair's looks.

Throughout the course of the series, Blair wore some fabulous skirt and blouse combinations. How did she always rock the perfect color combos and the most effortlessly beautiful fabric pairings so effortlessly? I couldn't tell you. But I was determined to try my best to create a similar look with pieces in my own wardrobe.

Again, this look wasn't a full-on copy of one of Blair's. But I thought my purple skirt and wrap-around blouse was very B-esque, and I even wore a diamond-encrusted headband to give it that extra Blair oomph. I was pleased with how feminine and pretty my ensemble turned out, and I think Blair would have approved.

Blair always looked flawless in printed clothing. For the last day of the experiment, I took her use of patterns into consideration and created an outfit of my own.

Taking Blair's leopard print dress from Season 6 as inspo, I threw on a leopard print skirt. I paired it with a basic black blouse and brightly-colored accessories. Knowing me, I would have usually worn all black with this outfit, but the color made it extra vibrant and fun.

Would I wear this outfit every day? Probably not. But I could definitely see myself walking down Fifth Avenue in the getup.

What Did Queen B Teach Me?

If her iconic looks from the show weren't inspiration enough already, this experiment proved to me that Blair Waldorf is an amazing onscreen style icon. Years after the series finale, her ensembles remain just as chic and trendy as they were when they originally aired.

I'm not an Upper East Sider, of course. I don't have access to designer clothes, and I am nowhere near as elegant and chic as Blair in my day to day. That being said, it was fun and creatively challenging to emulate her aesthetic.

There's a lot to be said for embracing traditional femininity — something that often seems to correlate to weakness and fragility in many people's minds — as a way to feel more confident and powerful. I don't think the fact that Blair was the "girliest girl" of them all on the show, yet also one of the most intelligent, cunning, creative, and, yes, psychologically manipulative characters was an accident. Instead, it was a statement about the strength to be found in all things femme.

It's safe to say that this won't be the last time I'll be channeling Blair when it comes to my own personal style.