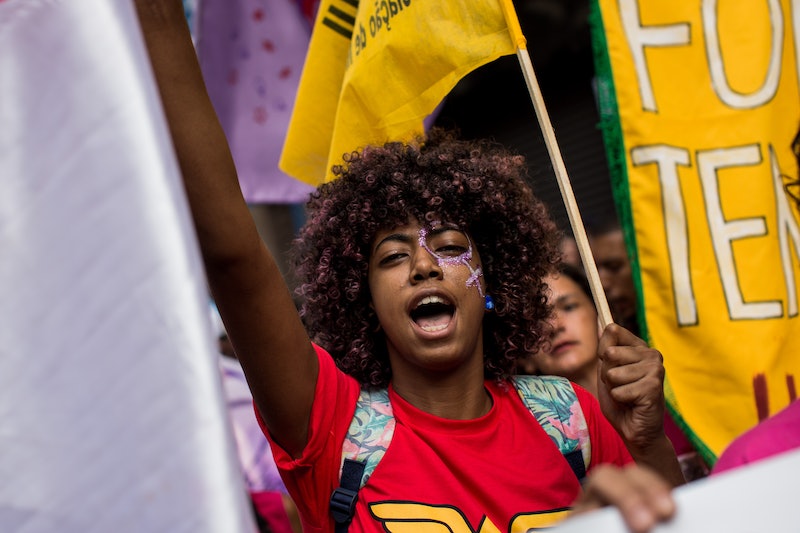 The past 12 months have been intense for millions of Americans, especially women of color. From President Trump's termination of the DACA program and attacks on Planned Parenthood to his travel ban targeting Muslim-majority countries, 2017 may have seemed exhausting. For exactly that reason, though, Americans can't let go of hope that the upcoming year could be better. With that progressive spirit in 2018, here's how you can support women of color — in big and small ways.

For feminism to truly embody a message of empowerment and hope for society, it has to include all women. An exclusionary form of feminism is like an elite club. It picks a select few and shuns the rest; it spotlights one group and shuts the door on everyone else. Considering the current administration's policy-making tendencies, such a form of feminism is damaging, alienating, and ultimately useless. Think about how Trump's travel ban hurts women from Muslim-majority countries, how anti-choice initiatives could harm women of color seeking accessible reproductive health care, or how Trump's Global Gag Rule on abortion silences women of color around the world.

This is where hope is extremely important. When I think of political hope, I like to recall feminist writer Rebecca Solnit's personal definition of political optimism. For Solnit, hope means "the future is unpredictable, and that we don’t actually know what will happen, but know we may be able write it ourselves." And I think there's a lesson for everyone in there. Here's how hope combined with action can make a safer and more nurturing environment for women of color in 2018.

According to research by media policy center All Digitocracy, journalism is a pretty aggressive and hostile field for women. But for women for color, the intersection of racism and sexism creates a particularly toxic environment. Racial and sexist slurs are flung at women of color in these professions, meant to intimidate and silence them. If you want to support women of color in the fields of art, journalism, academia, and more, read their work and amplify their voices.

Plus, there are communities like Journalists of Color (JOC) (with a Slack channel too!) and Journalism Diversify Project that offer resources on women of color in journalism, their work, and how you can diversify your media landscape.

2. Step In When You See Someone Being Targeted

When a woman of color is being harassed, your silence can mean compliance and approval. If you see a woman of color getting attacked — and this has been unfortunately rampant in 2017 — reach out to the woman and initiate conversation with her. In fact, through "non-complementary behavior," you can diffuse a racially hostile situation by focusing on the victim, talking to her in earnest, even asking her about the weather, and not allowing the attacker to think she is alone.

3. Confront Racism In Your Community

After the majority of white women in Alabama voted for alleged child predator Roy Moore (who has denied all accusations of sexual misconduct), several writers and activists called white women out and demanded that they confront racism in their own community. "White women really need to do the internal work within their community. The responsibility can no longer be on black women to carry the weight of moral responsibility in this country. This is sickening," Essence editor Dani Kwateng-Clark tweeted.

It may seem like a tough thing to do: confronting people similar to you, including friends and family. There's a risk of losing friends, getting cut off. But a person can't reduce socially harmful ideas unless they turn to their own. The reason why women of color ask white women to confront racism is because frankly, if they don't, women of color end up carrying that burden of tackling racism and sexism.

Different women of color face different political struggles. Knowing the differences not only makes you an informed ally, it gives you knowledge about how to help different groups. For instance, the National Indigenous Women's Resource Center (NIWRC) is a nonprofit organization that you can support if you want to raise the voices of Native American women in the country. Through the organization, you can help reduce violent misogyny against indigenous women.

It's critical to remember indigenous women in any feminist discussion. As observers note, indigenous women are frequently left out of the subject on gender violence and this negligence seems even worse when you consider the research on gender violence against this community. According to a Department of Justice study, violence against indigenous women is sky-high as the majority of the women, at 56 percent, have endured violent misogyny. Additionally, a 2017 study by the Connecticut Alliance To End Sexual Violence showed that Native American women face the highest rate of sexual violence compared to any other racial group.

According to a New York Times report, Jewish and Muslim women have expressed fear for their safety under Trump's administration. You can foster a sense of solidarity and unity with these religious minorities by reaching out to organizations like the Arab American Association of New York and The National Council of Jewish Women. See what they need and volunteer to understand Islamophobia, anti-Semitism, and how these forms of violence harm these communities. And if you don't want to contact an organization, check out grassroots movements in your neighborhood that seek to help women of color from religious minority groups.

Queer black theorist Moya Bailey first created the term "misogynoir" which points to the combination of racism and sexism directed at black women. If you want to challenge this bigotry in your community, on your college campus, or at the workplace, read about just how misogynoir hurts black women. From harmful racial stereotypes about black women to a dearth of social and economic opportunities, misogynoir is sadly very common.

You can also volunteer at organizations like the National Black Women’s Justice Institute (NBWJI). The institute declares its mission is to help "black women and girls in the U.S. who are impacted by criminalization and the criminal justice system directly and indirectly because of their race and gender. NBWJI also works in collaboration with organizations that elevate equity discourses among all women and girls."

7. Reach Out To Latinas

Organizations like Hermana work to reduce violence against Latinas in the country. The organization provides cohesive resources on solidarity and action but you can also help by understanding the Latinx struggle for empowerment in the United States by reading Latinx scholars. Grassroots initiatives throughout the country offer educational resources on understanding and empathizing with the group. If you feel strongly about it, check out this list on even more Latinx organizations across the country.

8. Confront Your Own Prejudice

A lot of social conditioning in America contains harmful notions against vulnerable people. They include stereotypes about "loud" black women, "submissive" Asian women, "sexually promiscuous" women of the Latinx community, and others. These stereotypes surround people and influence how they think about others. It affects how people look at the world. Acknowledging this is the first step to becoming a good ally to women of racial minority groups. Knowing that you are not perfect is the first step toward improving your social conduct and strengthening your commitment to uplift other women.

Be intersectional by remembering not only cis-women of color but also trans women of color. Remember how transphobia reached a record high this year with at least 25 transgender deaths in 2017, according to the Human Rights Campaign (HRC). Inclusion really does matter.

If you're financially able to, you can donate to LGBTQ organizations like No More to support trans women of color.

Most importantly, listen to women of color. A good ally pays attention to the variety of perspectives coming from other communities. She tries to expand her worldview by including other people. Listening as an ally isn't just about sincerely being supportive during the airing of a grievance. It's also about celebrating the leaps of progress women of color make. It's about being there when most people don't show up.

The thing is, educating yourself to be an ally is not a linear process. It doesn't go from Point A to Point B just like that. It takes trial and error. It takes time and dedication. It takes a lot of reading, understanding, and empathizing. Stepping forward to offer help feels intimidating but it takes even more guts to admit one's own complicity in social inequality.

All of this sounds daunting at first but it is possible to be an ally. And in 2018, becoming one will be more urgent than ever.

More like this
Why You're Seeing Green Bandanas At Abortion Rights Protests
By Lexi Inks
The Most Powerful Photos From The Weekend’s Abortion Rights Protests
By Melanie Mignucci
5 Ways To Stand In Solidarity With Women In America From The UK
By Sophie McEvoy
The Families Of Grenfell Tower Are Still Waiting For Justice, Five Years On
By Bustle UK
Get Even More From Bustle — Sign Up For The Newsletter