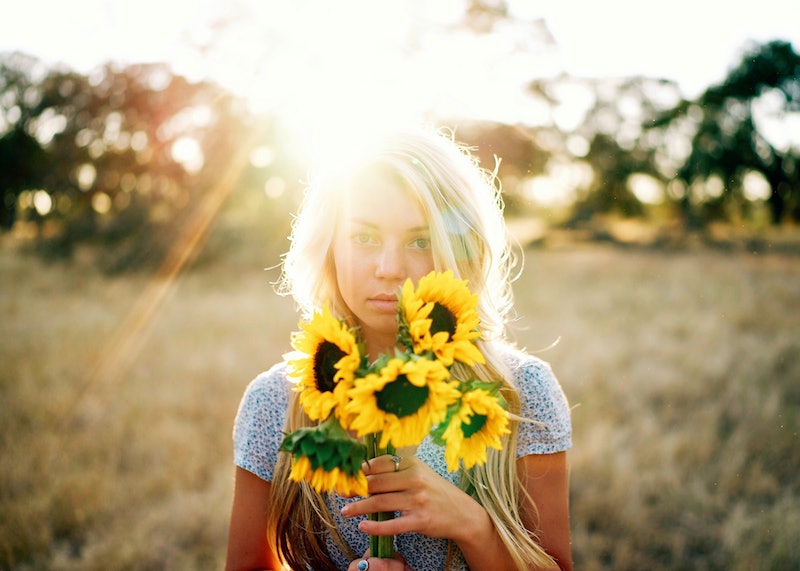 By now, most of us have a pretty good grasp on this whole skin cancer thing. I bet you wear sunscreen, avoid sunburns, and tell your dermatologist about any weird moles. But some signs of skin cancer are difficult to spot, making it all the more important to stay informed.

So, let's start off by talking about what, exactly, can cause the disease. "Skin cancer is the uncontrolled growth of abnormal skin cells," dermatologist Dr. Marina Peredo, of Skinfluence in NYC, tells Bustle. "While genetics can play a role, Ultraviolet (UV) radiation from the sun is the number one cause of skin cancer." This is true for the light from tanning beds, the blazing sun on the beach, and any sunlight exposure you get during the winter.

If you know what to watch out for, and monitor your skin monthly for changes, you can increase your chances of catching skin cancer in its earliest stages. "Skin cancers found and removed early are almost always curable, so it’s important to pay attention to your skin’s changes and flag anything that seems unusual," Peredo says. "Additionally, the longer you wait, the deadlier it becomes. There is also a greater chance of scarring for skin cancers that have been on the skin for a long time." Since you don't want any part in that, read on for some subtle signs to watch out for.

So many people focus on moles that are raised or bumpy, thinking "that's got to be skin cancer." But they're not always the ones you need to worry about. "Numerous times, patients have come in concerned about the raised mole on their back, which is fine, but the flat dark brown mole is the one that is the skin cancer," Dr. Jeremy Fenton, of Schweiger Dermatology Group in NYC, tells Bustle.

2. Bumps On Your Skin

While bumpy moles aren't always the cancerous ones, that's not to say you shouldn't point them out to your doctor. "Some skin cancers, such as basal cell carcinoma, do form raised bumps," Fenton says. "So don’t ever hesitate to point out anything that you feel is different or abnormal."

3. Moles On Your Feet

While sun exposed areas are at a greater risk for skin cancer, Fenton tells me some forms of cancer — such as melanomas — can form in areas that rarely see the sun. "That’s why during a skin check, I always look at the bottom of the feet, between the toes, and beneath the underwear." If you notice anything where the sun don't shine, such as a mole between your toes, have it looked at right away.

4. Eczema That Doesn't Go Away

Scaly red skin may, in fact, be eczema. But it could be something else. "Some low grade skin cancers such as a squamous cell carcinoma or superficial basal cell carcinomas sometimes appear very similar to psoriasis or eczema," Fenton says. "They can look just like red scaly patches, that just don’t go away."

While you're at it, keep an eye on any red bumps that look like mosquito bites or pimples. "As a general rule, if it persists for more than a month, its definitely time to get it checked," Fenton says. "Bites, pimples, and any injury should heal by then." Cancers, on the other hand, will not.

6. Moles And Bumps That Bleed

If you have anything on your skin that bleeds easily, speak up. "Anything that bleeds should raise a red flag and get checked," Fenton says. While not always a bad thing, it may be a sign of cancer.

It's important to monitor all the moles and freckles on your body for signs they're changing shape. As Lauren Fraga, program director at Block the Blaze tells me, if a mole changes in shape, color, size or appearance, then it's time to make an appointment with your dermatologist.

Waxy or translucent bumps are another sign to look out for that doesn't necessarily scream "skin cancer." As Peredo says, "Skin cancer can initially present as a pale patch of skin or waxy translucent bump instead of the skin lesions many are used to seeing." If you notice one, tell your doc.

You might scars from falling off your bike, or nicking yourself while shaving. But if you have a scar that seemingly came outta nowhere, take note. As Fenton says, "One type of aggressive basal cell carcinoma (commonly called morpheaform or sclerosing) can sometimes appear similar to a scar. If you have a spot that looks like a scar, but you don’t have any way to explain how it got there, it should be evaluated."

If you notice a bump on your skin that wasn't there a few weeks ago, take note. "A growth that comes up quickly can be a keratoacanthoma," says board-certified dermatologist Debra Jaliman, MD. This type of skin caner commonly crops up on areas of the skin that are exposed to the sun, such as your face, neck, hands, arms, and legs.

Your skin is your largest organ, so it can be tough to monitor the whole thing. But do your best to watch out for areas that have changed color. "Basal cell carcinoma and squamous cell carcinoma are usually skin-colored or pink and can look similar," says Jennifer Stein, MD, PhD, a dermatologist in the Ronald O. Perelman Department of Dermatology at NYU Langone. "Melanoma is typically brown or black, but can occasionally also be pink or skin-colored."