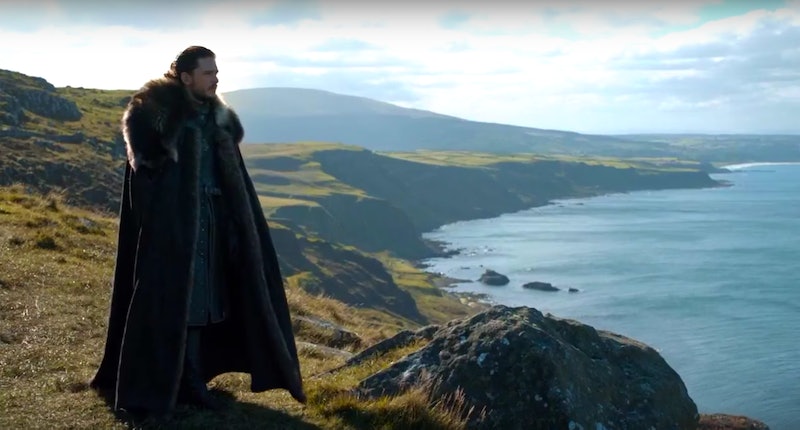 There a ton of reasons why people tune in to watch Game of Thrones. It covers every genre, with romance, humor, action-packed fight scenes, and dramatic twists and turns that leave you plotting and theorizing all hiatus long. It's these intense storylines that draw viewers in episode after episode, and while it might be hard to imagine plots on the show getting even more extreme, there are Game of Thrones storylines that almost happened that would certainly leave your jaws on the floor.

Obviously, there have been plenty of moments seen on the show that have already done just that. From the discovery of Jon's true parentage to the sex scene between Jon and Daenerys Targaryen to the reveal of Cersei's fourth pregnancy to Littlefinger's quick yet deadly trial, Game of Thrones has been filled with shocking storylines — and that's not even mentioning everything that has to do with The Red Wedding. Some of these scenes were predicted by fans, but others came out of left field, especially for non-book readers.

As the series has shown, anything is possible, and it's wild to look at these Game of Thrones storylines that almost made the final cut. Possible spoiler alert, though — some of these plots could potentially still happen, as the series is currently ahead of the books so there's no telling what material will or won't be used. As such, Season 8 could take some of these storylines, spin them, and spit out a crazy ending. You've been warned.

1. Daenerys Was Going To Like Viserys A Lot More (And Kill Khal Drogo)

We all remember how awful Daenerys' brother Viserys was. He literally sold her to the Dothraki for his own selfish gain, treated her like dirt, and then felt like he was entitled to anything he wanted from her. Luckily, he saw a painful and satisfying end. However in an original outline for A Song of Fire And Ice, George R.R. Martin wrote that Daenerys not only would keep allegiance to her brother, but would also kill her husband Khal Drogo. Of course she does sort of do that last part in the show, but it's a mercy killing that leaves her distraught. It's certainly not about "avenging" her brother at all.

In the novels, originally there was going to be a huge gap in time where events like Sam training at the Citadel and Arya with The Faceless Men would have been skipped over, so that Martin could age the characters quicker. The fourth novel, A Feast for Crows, was rewritten to include this part of Arya's story, giving her this very valuable skill. Imagine all the deaths you wouldn't have seen if Arya couldn't use the faces of others she's killed.

3. Myrcella's Death Was Going To Be Gorier

The Lannisters bring about death wherever they go, even to their own family members. All three children of Cersei are now dead, and Myrcella's is one of the more tragic deaths because she really didn't do anything to deserve it. Like Tommen, she was just a result of her mother's foils.

Nell Tiger Free, who played Myrcella, said in an interview at MCM London Comic Con that the death was supposed to be super gory, with fake brain chunks involved. Luckily, it was pretty tame, and the audience gets to remember her for the good princess she was.

4. Lady Olenna Was Plotting Against Cersei Lannister For A While

Lady Olenna Tyrell stole the hearts of many viewers with her strong will and witty remarks. She was everything you'd want in a matriarch and even though she met her end, she did it with outstanding finesse by revealing her hand in killing King Joffrey (aka, she did it).

In a deleted scene released by Entertainment Weekly, Lady Olenna had been plotting to leave King's Landing long before Margaery and Loras were released from prison. There's no mention of death here, but odds are the only way to do that was with a murderous plan. Would she have succeeded? The world will never know.

In the original draft for the books, The Red Wedding and The Purple Wedding never happened. As viewers of the show know, The Red Wedding killed off a ton of main characters in brutal ways, while the Purple Wedding, while not mentioned often by that name, was when Joffrey was poisoned at his own wedding to Margaery Tyrell. Obviously these are massive events, and while that draft still had many characters dying, it was going to be on a battlefield.

6. Catelyn Stark Was Going To Live A Bit Longer — But Still Die

In addition to The Red Wedding not taking place in the outline, right after Ned was beheaded, Catelyn took Arya and Bran to the North to meet up with Jon. However, even though the family was briefly reunited at the Wall, they were then forced beyond the Wall into the land of Free Folk and wights. Bran is able to use his "magic," aka what Martin calls his abilities in the early outline, and Arya uses Needle to survive along with their direwolves. Catelyn, however, is killed by a White Walker and meets her inevitable death.

7. There Was One Person Who Loved Joffrey Other Than Cersei

In that now-famous first outline for A Song Of Fire And Ice, which was actually found in a tweet by a book shop back in 2015, it was written that Sansa not only loved Joffrey, but actually gave birth to his child. In the show, young Sansa thought she loved the king, but that's soon dissolved when his true nature is shown. Luckily the duo never got married in the series or had a child.

One of the wildest things in that outline was the love triangle between Arya Stark, Jon Snow, and Tyrion Lannister. In the show, Tyrion does marry Sansa, but out of duty. In the outline, he falls in love with Arya, who is much younger than him, and Jon and Arya are already in love with one another. This is definitely more troubling due to the fact that at the time, they still think they're half-siblings (either way, they're cousins, so it's still wrong however you spin it). This storyline was either given to Cersei and Jaime, or it inspired that canon plot point. And Jon is currently in a budding relationship with his aunt, Daenerys Targaryen, so it's still pretty icky.

In the outline, one storyline was that Jaime would sit on the Iron Throne and rule Westeros. Seeing as he doesn't have the disposition to do this in the show, it would be an interesting arc considering he's the Kingslayer. He'd also have to pry Cersei's cold, dead body off the throne before he even sat on it.

10. Cersei May Miscarry In Season 8

During the height of Season 7 excitement, there was a mostly-accurate leak posted to Reddit that outlined the full season, including a different finale than what fans saw. In the post, it said that Cersei woke up in a puddle of blood one night, insinuating she had miscarried the baby she's currently pregnant with at the end of Season 7. So audiences could have seen that ending, instead of an ominous threat to Jaime with bump in tow.

Since Cersei had a prophecy that stated she'd only have three kids, many fans think that she's either lying about carrying Jaime's fourth child or ultimately the child is going to die before birth.

The last, most crucial piece to come out of the outline of the series is who survives the battle for the Iron Throne. In a transcript of the original letter and outline, Insider writes that it says this: "Five central characters will make it through all three volumes, however, growing from children to adults and changing the world and themselves in the process... The five key players are Tyrion Lannister, Daenerys Targaryen, and three of the children of Winterfell, Arya, Bran, and the bastard Jon Snow."

While this is a storyline that hasn't happened yet, it certainly could. All five are currently alive and could potentially still be by the end to Game of Thrones. However, it's important to note that the writers of the show really have no obligation to stick to Martin's original idea now that they've overtaken where the book left off. Considering that this outline has been out for a few years, they'd be smart to go a different route. There are also speculations that no one will survive, so who even knows at this point — but that's half the fun of watching Thrones.

More like this
'Bridgerton' S3 Teases Exciting Social Season For Penelope Featherington
By Bustle
Matt Smith Proves He's Daddy Daemon In This Viral 'House Of The Dragon' Video
By Marina Watts
The 'Firefly Lane' Book Ending Teases Way More Tears To Come In 2023
By K.W. Colyard
'Broadchurch' and 'I Hate Suzie' Casts Join Forces For Gritty BBC Drama
By Bustle UK
Get Even More From Bustle — Sign Up For The Newsletter