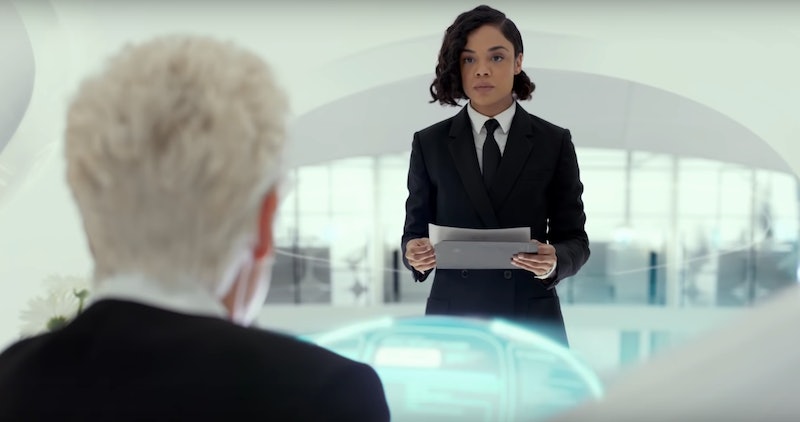 That said, there isn't a lot of variety in where these films come from. There are lot of sequels and a lot of movies that are based on stories or movies that already exist. Of the 12 titles listed, three of them are about Marvel heroes. There's another Men in Black sequel, another Star Wars movie, and another Godzilla. While it's amazing and important and exciting to see women in the lead roles in these franchises, some more original stories would be great, too. No need to get rid of the women-led franchises, let's just try for 24 women-led action movies instead of 12 and get some more perspectives in there.

There are some exciting things here, though, including some big conclusions that fans have been waiting to see for a looooong time. (Hello, Avengers: Endgame and Star Wars: Still No Episode Title.) Here's what you can look forward to this year in ladies kicking ass.

This film based on a manga series stars Rosa Salazar, who is all CGI'd and motion captured up to appear more like a manga character.

Furie is a Vietnamese film about a mother (Veronica Ngo), who is trying to get back her child who has been kidnapped. (Fun Fact: As Variety points out, Ngo played the ill-fated Paige Tico in The Last Jedi.)

It's the first solo female-led Marvel movie! Brie Larson takes on the role of Carol Danvers a.k.a. Captain Marvel, and the film might just let fans know how she connects to...

The fourth Avengers movie will show the heroes dealing with the aftermath of last year's Avengers: Infinity War, and while it's an ensemble, there are a number of female superheroes involved.

5. Godzilla: King Of The Monsters

King of the Monsters is the sequel to 2014's Godzilla. This one will star Vera Farmiga, Millie Bobby Brown, and Sally Hawkins, one of a few characters who is returning from the first movie.

Jean Grey/Phoenix (Sophie Turner) gets her own movie, and it's intense. She loses control over her powers and threatens to hurt, well, basically everybody.

It's Men in Black, but with a woman (Tessa Thompson) and some Australian guy. And more international cities. And Emma Thompson. A good time should be had by all.

Ten years after the original, the Zombieland sequel is coming. Abigail Breslin and Emma Stone are both returning to their lead roles.

A new group of Angels is hitting the big screen this fall to no doubt usher in a new generation of Angels fans. This time, they're played by Kristen Stewart, Naomi Scott, and Ella Balinska, and the film is directed by Elizabeth Banks, who also plays Bosley.

The sixth Terminator movie obviously stars Arnold Schwarzenegger, but Sarah Connor (Linda Hamilton) is also back, since this one is a direct sequel to Terminator 2: Judgement Day, as reported by ComicBook.com.

Based on the book of the same name by Mark Burnell, The Rhythm Section will star Blake Lively as a woman who is seeking revenge after her family is killed.

Lastly, we have Star Wars: Episode IX, the final piece of Rey's (Daisy Ridley) saga. How will it end? How is she really connected to Kylo Ren? Will certain fans erupt into a blind rage again? All these questions and more will be answered. Probably.

There you have it: 12 women-led action movies to look forward to and support in 2019. Next year, let's hope there's even more.