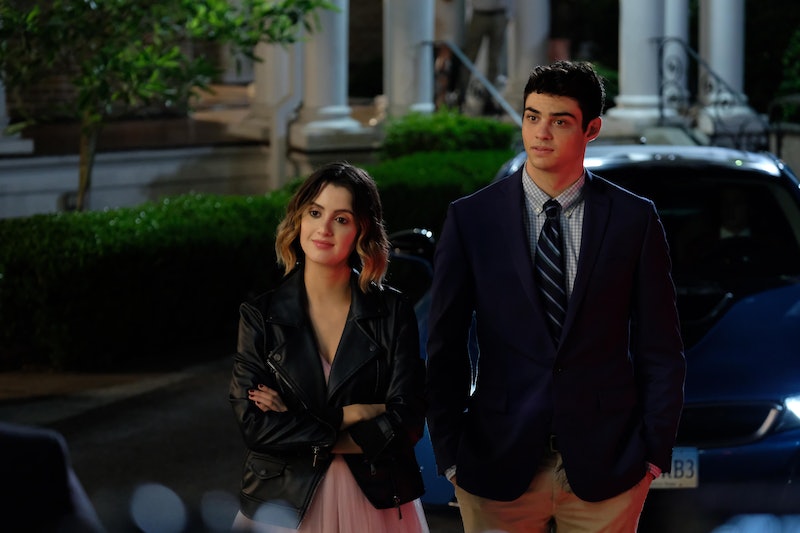 Noah Centineo is riding the Netflix teen rom-com wave right into his third movie with the streaming service, The Perfect Date. Out April 12, this one is about a guy who creates an app to be a stand-in date at parties, school dances, and more in order to make money. But, of course, he falls for someone in the process. Classic. If the release of The Perfect Date has you looking for similar movies on Netflix, then there are a bunch you can choose from. (Or you could just watch all of them.)

Netflix switches out its offerings pretty often and there is always a very wide variety of films available. So, while the movies below all have some things in common, they're from different time periods and range from totally goofy to more serious. Also, there are conveniently three other Centineo movies on Netflix, so if that's what you're going for, then you'll be all set. And if you happen to have a big interest in '80s teen rom-com icon Molly Ringwald, there's a lot to choose from there, too. And even a couple places of overlap between her and Centineo.

Here's what you can get to watching on Netflix, either to get ready for The Perfect Date or because you just need more high school love drama afterward.

1. To All The Boys I've Loved Before

We've got to kick it off with the movie that started it all. "It all" meaning teen rom-coms on Netflix starring Noah Centineo. If you are looking for something similar to The Perfect Date, this is as close as you can get. Not only does it have all of the aforementioned characteristics, but it also involves Centineo's character posing as a fake boyfriend. Hmmm, I'm starting to think he was typecast.

2. Sierra Burgess Is A Loser

The second Centineo-Netflix collab is Sierra Burgess Is a Loser, starring Stranger Things' Shannon Purser. This one is about a high school girl who starts falling for a guy via phone, but he originally thinks he's talking to someone else: the most popular girl at school.

This Centineo-starring movie, that is not a Netflix Original, is about teens who live in Malibu, and it kind of looks like an over-produced reality show. It also features Molly Ringwald, which leads us to...

...the first movie on this list that doesn't actually feature Netflix's favorite dude. Taking it back a few decades, there's the classic John Hughes teen movie Sixteen Candles, about a girl, Sam, who, of course, has a crush on the most popular guy in school, Jake Ryan. Also, this movie is mentioned in To All The Boys I've Loved Before so... connections.

Another Hughes-Ringwald flick, Pretty in Pink is about a high school girl dealing with drama from her best friend having a crush on her and the guy she likes being pressured to stay away from her because she's not of his social status.

The Kissing Booth also features Ringwald, but like in SPF-18, she's a mom to one of the main characters. It's about a girl who has a crush on her best friend's brother — the problem is, they have a long-standing rule about her not dating him.

This re-telling of the classic Cinderella story is set in a high school and stars the very 2004 pairing of Hilary Duff and Chad Michael Murray.

Alex Strangelove is a Netflix Original about a high school boy, who is dating a girl, but comes to a different understanding of his sexuality after befriending a gay student.

If you know the young adult book series about Georgia Nicolson, then this 2008 movie will sound familiar. It's about a teenage girl who is dealing with an on-going series of teenage issues, like having a crush on an older guy and accidentally removing half her eyebrow.

A girl and a boy have a wild night out in New York City, battling exes and searching for drunk friends, while the hottest indie music of 2008 plays in the background.

12. The Edge Of Seventeen

An outcast teenager tries to navigate high school and being constantly compared to her popular brother, while doing things like accidentally sending incredibly awkward texts to her crush.

Go forth, Centineo fans, Ringwald fans, and fans of zoning out to a nice teen movie! These Netflix romances are waiting for you.