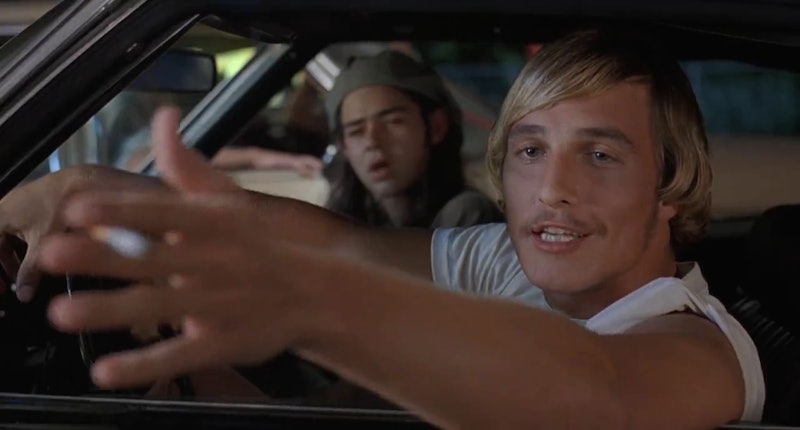 If you remember the '90s only fondly, you've probably blocked out the super sexist things about the '90s that really dragged the era down. Because the '90s weren't all Riot Grrrl, kicky Spice Girl power, and sisterhood. There was a lot of deeply entrenched misogyny that came out in politics, the media, and pop culture. So while we often laud the '90s as being a wonderfully feminist time, the period can't go without some serious critique.

For instance: we dragged Monica Lewinsky. Girls Gone Wild was an actual thing that happened. Young women in movies were either tamed by men for their unruly ways, or remade by men into fetishized versions of themselves in order to be desirable. When we put it like that, the '90s weren't always a great time for feminism. Even the things that seemed really feminist to you, like No Doubt's "Just A Girl", were kind of mired in identity politics and inappropriate bindis — things that definitely wouldn't fly in the feminist world today. It's time to reach into your subconscious, to the sexist things from the '90s that you buried somewhere in the deep recesses of your mind to be forgotten, and remember all the times the '90s weren't so feminist after all. Here are some of the super sexist things from the '90s you probably blocked out long ago.

Teenage girls depicted in '90s movies were often "made over" in order to be appealing/have the sexy male protagonist fall in love with them. The plot of She's All That was a prime example of how '90s pop culture often expected women to change in order to be desirable.

2. The Fact That All Your Movie Heroines Were Softened By A Man

Your favorite heroines were all bold and brash and kick-ass in the '90s — until they weren't. A lot of unruly heroines in pop culture were softened or tamed by a man. From Buffy to Kat in 10 Things I Hate About You, very few tough women were safe from the effect of male puppy dog eyes.

3. The Backstreet Boys' "As Long As You Love Me"

Remember how much you loved the Backstreet Boys? And remember how their flagship romance song was about completely stripping all women of their identities, "as long as you love me"? The song that epitomized love in pop in the '90s was basically saying, it doesn't matter who the woman is, as long as she loves the man, she'll do just fine.

4. The Way We Leaned Into The "Virgin/Whore" Narrative

So much of pop culture was obsessed with this dichotomy. The female duos in movies like Empire Records and Mallrats were often made up of one "good girl" and one "bad girl" — apparently in the '90s, female sexuality wasn't much of a spectrum at all.

5. The Fact That Our "Feminist" Icons Were All Super White

Gwen Stefani, Fiona Apple, Winona Ryder, Drew Barrymore, Buffy, Romy and Michelle, Murphy Brown, Lisa Loeb, Shirley Mason... so many of the feminist icons we celebrated in the '90s were white. But we know that representation is key, and when our feminist icons are so limited, that's a big problem for intersectionality and inclusivity.

7. Everything The Press Put Monica Lewinsky Through

Slut-shaming has been around since always, but the way Monica Lewinsky was treated by the press and the public (and the way Bill Clinton was essentially exonerated by comparison) is still absolutely vile.

8. The Fact That People Called A Body Type "Heroin Chic"

Celebrating drug abuse and the emaciated female form as something desirable is so, so weird in retrospect — especially when you consider how fashionable the "heroin chic" look was seen for a time.

9. That Time We Celebrated A Movie For Being EXTREMELY Creepy (And For Some Reason Still Do)

When Matthew McConaughey's character in Dazed & Confused said he liked high school girls because as he got older, they stayed the same age, people repeated it and repeated it, ad infinitum, as though it wasn't at all creepy, not to mention extremely problematic and sexist.

10. The Invention Of The Friend Zone

Invented by Joey on Friends, the Friend Zone, bred under the notion that women somehow owe men something for their time, has plagued us since the '90s. Once Joey declared Ross the "mayor of the Friend Zone" after another woman he was nice to rebuffed his advances, it became open season for "nice guys" everywhere to feel indignant when girls weren't attracted to them.

11. The Rise Of Raunch Culture

Girls Gone Wild was born in the '90s, along with a whole raunch culture movement that convinced women they were "empowered" by showing their boobs off and basically conforming to male dictated stereotypes of sexual desire, for male visual pleasure. And while showing off your goods is totally fine if that's something you're into and a decision you've made for your own enjoyment (you do you, friends!), there was decidedly a time in the '90s when some women only felt empowered by it because of the satisfaction of the male gaze. The game gamed us.