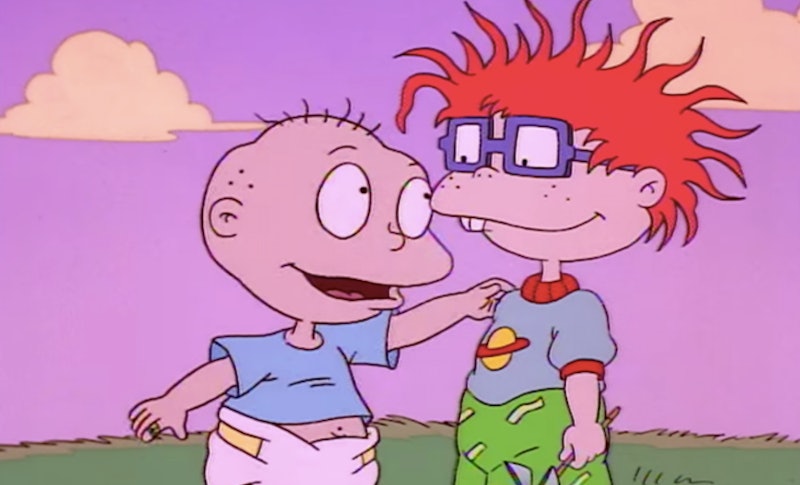 More than 25 years after making its Nickelodeon debut, Rugrats remains one of the most memorable cartoons of all time. Despite that, there are probably still things you never noticed about Rugrats — no matter how many times you watched in the '90s. There was never a dull moment when it came to the precocious nature of those daring tots. The countless adventures they encountered over their 13-year run have, no doubt, left us with memories to cherish for a lifetime.

During their nine seasons in production, Rugrats managed to churn out a whopping 172 episodes, making it the one of the longest running cartoons in Nickelodeon history. But though there are moments from the series that continue to linger, it’s hard to remember all of the intricate details. And for those of us who watched as children, there was plenty of commentary that likely went right over our little heads.

Still, Tommy, Chuckie, Phil, Lil, Angelica, and friends managed to warm the hearts of kids and adults alike with their nonstop shenanigans. The playful escapades, which were magnified through their wild imaginations, always involved the babies getting into mischief that their adult guardians somehow never seemed aware of. Nevertheless, it appears the elders weren't the only ones missing out on all of the action. Here's a roundup of points viewers may have also overlooked.

1. The Whereabouts Of Chuckie's Mother Weren't Revealed Until 1997

Fans were left guessing where Chuckie Finster's mother was for the first 66 episodes of the show. It was finally revealed that she died from a terminal illness in a Season 4 Mother's Day special. Kim Cattrall of Sex and the City fame provided the voice of Chuckie’s mom in the heartbreaking episode.

2. Women Provided The Voices Of The Main Characters

All of the main characters of the show — Tommy, Chuckie, and Phil included — were voiced by women.

It was implied in the Mother's Day special that Tommy was born prematurely and spent some time in an incubator while in the hospital.

4. Charlotte Pickles Was Obsessed With Technology Way Ahead Of The Curve

Years ahead of her time, Charlotte seemingly predicted our impending addiction to phones and technology as a whole.

5. Tommy's Lines Were Once Recorded While The Voice Actor Was In Labor

Elizabeth Daily, the actor who voiced Tommy, once recorded her lines while she was prepping to give birth to a baby, according to an interview with The Guardian.

6. Rugrats Has A Star On The Hollywood Walk Of Fame

The first Nickelodeon show to do so, Rugrats landed its very own star on the Hollywood Walk of Fame back in 2001.

Tommy's green dinosaur actually became an issue when the creators of Godzilla felt that the toy was an infringement on the fictional beast and reportedly sued in 2002, according to MoviePilot.com. While details surrounding the lawsuit are scarce online, it's been documented that Reptar appeared on the show less following the rumored lawsuit.

8. Tommy's Shirt Was Once Red

In the Rugrats pilot episode, Tommy donned a red t-shirt and pants instead of the blue top and diaper that became his signature look for 13 years.

9. Tommy Was Absent From Four Episodes

The bravest baby of the brood, Tommy, appeared in all but four episodes of the series. According to the Rugrats' Wikia, Tommy was absent from "Cuffed," "The Unfair Pair," "Pickles vs. Pickles," and "Tell-Tale Cell Phone."

10. Alex Trebek Once Played A Version Of Himself

The game show host once voiced a parody of his Jeopardy persona, portraying "Alex Quebec" on Super Stumpers.

11. There Were a Ton of Risqué References

There were quite a few questionable moments to come from the children's cartoon over the years. As rounded up by BuzzFeed, discussions about adult magazines, Dr. Kevorkian, and insensitive jokes about Pearl Harbor certainly pushed the envelope, in terms of appropriate content for a children's show.

12. The Rumored "Russian Roulette" Episode Was Actually A Myth

Speaking of inappropriate content, there once was rumor in circulation about an episode in which Grandpa Lou announces, "I'm back from a game of Russian Roulette with the guys." Thankfully, it turned out to be a myth.

Perhaps it's time to rewatch some of your favorite episodes of Rugrats to see if there's anything else you missed.