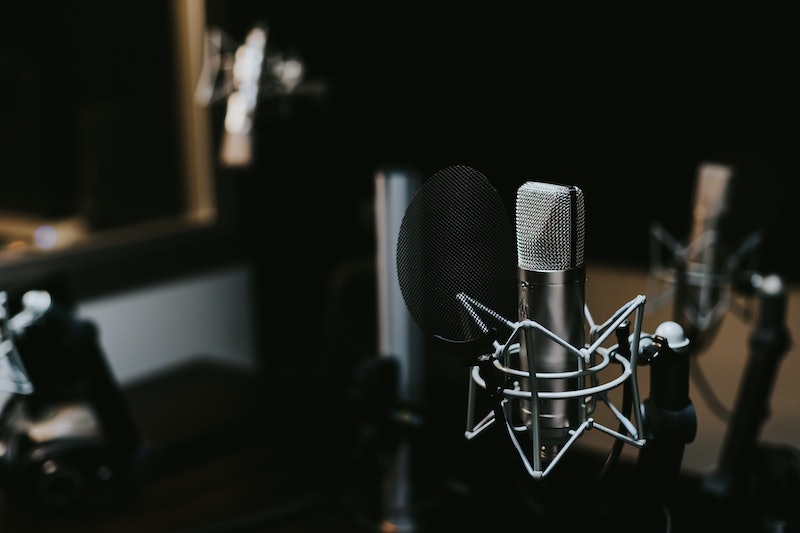 Time for some real talk: I’m a big fan of podcasts. From The Love Bomb to Two Dope Queens to Stuff Mom Never Told You to Bustle’s own I Want it That Way (side note: I do, in fact, want it that way. Thanks, Bustle!), there’s nothing I love more than getting lost in a good podcast. My favorites? Binge-worthy true crime podcasts — preferably the murderous kind. Because I’m a weirdo who loves murder.

And If you’re anything like me you get really excited when you meet someone else who loves to talk about crime and murder. It’s a taboo thing. Not everyone is into it. And when you find someone else who shares your obsession with unsolved murder, it’s like finding your soulmate. I know this to be true because it happened over drinks with a new friend last month, and it was magical.

And I’m gonna go out on a limb here and guess that you’re a little bit into listening to murder podcasts too if you’re reading this article. And if that’s the case, you might still be reeling from the cultural zeitgeist shock of Serial, season 1. Serial talk is still among my favorite conversation fodder for cocktail parties: Who do you think did it? Why can’t we get to the truth? And if you’ve been looking for something to fill that crime-obsessed void in your heart for some time now, fear not! Hear are 12 true crime podcasts you need to be listening to.

If you’ve secretly been yearning for someone to talk about murder with, look no further. Georgia Hardstarck and Karen Kilagariff (says that five times fast...) are the two anxious-but-hilarious besties we all need in our lives. In short, they’re obsessed with murder — in avoiding being murdered, talking about people who already have been, and diving deep into the sociopaths who commit the crimes. Their show often veers off into ebullient tangents about culture, LA, and the likelihood of being murdered while walking to your car, but listeners don’t mind; My Favorite Murder quickly rose to be one of the most downloaded on iTunes after just a few episodes. A word here, though: if you’re into really heavily researched podcasts with cited discussions, this ain’t that. But don’t let that turn you away! The half-assed nature of Karen and Georgia’s research — along with their hilarious commentary — is half the fun.

2. Last Podcast On The Left

Effortlessly combining the irresistible pull of contextual research, comedy, and unsolved mysteries, Last Podcast on the Left is a great show for those who want to dive even further into the realm of freaky/taboo topics. The podcast looks into everything from vampires, UFOs, cults, the occult, demons, Bigfoot, etc., and the hosts’ hysterical irreverence for such phenomena (and the individuals who mercilessly track and study them), but not without a healthy dose of skepticism.

Fans who have been lamenting the passing (and totally underwhelming second season) of Serial need look no further for their true crime fix. Criminal — an OG true crime podcast — combines the best of Serial and This American Life — meaning an episodic chronicling, and the smooth, buttery detachment of Sarah Koenig’s voice — in this narrative series about crime and its various players. Host Phoebe Judge sets each episode up like its own mini/ creepy bedtime story, complete with impressive sound effects, fully fleshed out characters, and a hidden moral hidden somewhere in the ending. And thanks to its somewhat short run-time, you can usually knock out an episode on your morning commute — or while you're falling asleep if you're weird like that.

Another episodic favorite, Someone Knows Something zeroes in on one crime over several episodes. The story in season one centers on a five-year-old boy from Ontario who essentially vanished without a trace on a family fishing trip. But someone knows something, and host David Ridgen — who grew up in same town as the boy — is out for answers. And good news for fans: Season 2 is just as good.

Though not exactly a true crime podcast, S-Town packs the same beautiful hooks and edge-of-your-seat appeal as some of its true crime contemporaries. The reporting is incredible, the characters are compelling, and the content of the story sits firmly in the ultra-bizarre camp of, "you just can’t make this stuff up." One of the best things about S-Town is that the story literally unfolds for the reporter in much the same way as it does for the listener; the deeper you get into the episodes, the more hooked host Brian Reed himself becomes on discovering the truth. If you haven’t binged it yet, it’s definitely worth the seven-hour listen.

Detective covers the work and career of former Colorado Springs Police Department detective Joe Kenda. Season 1 covers Kenda's career rise from rookie to retiree — over 23 years' worth of cases, leads, and reading between the lines. Great for fans curious about how these crimes actually get solved.

If you love the show, you'll love the podcast-version of the program, which packs the same docu-style crime storytelling as its television counterpart. 48 Hours is more informative than it is gripping, but still totally worth a listen.

Addicts of HBO's The Jinx, will love Crimetown, a podcast project from the show's producers: The show centers on a crime-fueled web of police corruption in Providence, Rhode Island. The inaugural episode features a prosecutor tackling a high-profile mafia case.

A think-piece of a podcast dedicated to diving deep into the psyche of criminals, Sword and Scale is all about examining the evil side of human nature. Expect top-notch research and storytelling, too, and be prepared to get deep into a black hole of thought afterward, likely fueled by the show's tagline: "Sometimes the worst monsters are real."

True Crime Garage is similar to My Favorite Murder in some great ways. Hosts Nic and "The Captain" get together each week to drink beers, discuss high-profile crimes, and see who can be funnier. The reporting starts out pretty well, but tends to become less buttoned up after a few rounds. But, like My Favorite Murder, this one's as much about the humor and joy of finding another person who loves murder as much as you do as it is about the stories.

Another podcast perfect for binging (at just eight episodes, you can get through them pretty quickly), Missing is almost bound to take over your Saturday. The podcast is all about — you guessed it — missing persons, but it offers up something unexpected by also examining what it's like when someone chooses to go missing. For those who've ever seen their credit card bill and thought about living life on the run, Missing will be a treat.

Last but certainly not least on this list, Unsolved Murders is everything your unsolved mysteries-loving heart wants. If you can't quit running through the evidence in all unsolved cases, and love the cheesy reenactment drama of true crime television, you will absolutely flip your lid for this podcast. Unsolved Murders uses talented voice actors and well-appointed sound effects to recreate each story. Season 1 covered everything from the New Orleans Axeman (a serial killer with a soft spot for jazz) to a Texas serial killer. Get excited — this one's bound to become one of your new favorites.