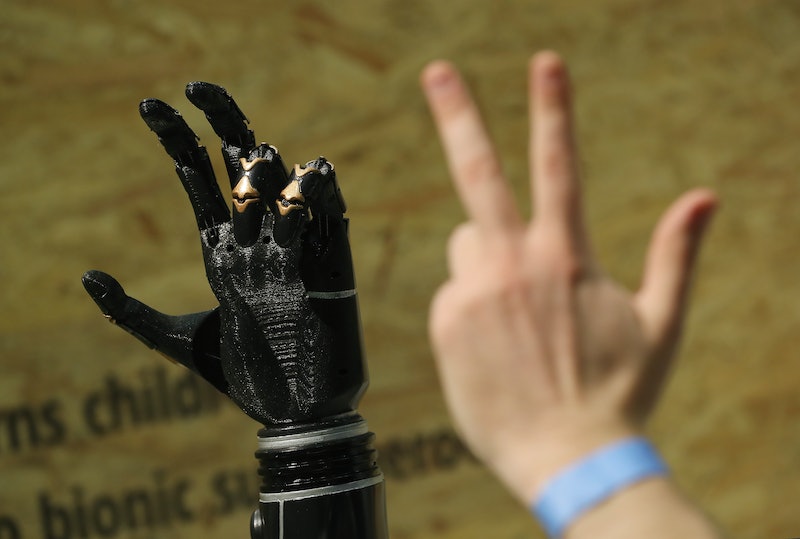 Raise your hand if you’ve ever heard someone say that robots want to take over your job. It’s a line I’ve heard a lot lately, and truth be told, it’s got me feeling a little uneasy. In my mind, there are two kinds of robots: first, the “Bicentennial Man” kind of robot that want to snuggle your dog and make you dinner and loosen up by the fire with you after (you with a cocktail, him with a few sprays of WD-40). Then there’s the scary kind of robot: the "Terminator/Prometheus/Stepford Wives" kind who makes you think they’re actually human before they swoop in and mess. Everything. Up. Is it unlikely? Sure. But it still gets me thinking about the ways robots may change our lives in the future.

It begs the question: what’s in a name? Robots make me nervous, but a robot by any other name would feel a lot less scary. Need proof? Just take a look at auto-manufacturing, online log-in interfaces, phone tree systems, and ATM machines — all of which have been automating human experiences for decades without much backlash. So why is it that we automatically freak out at the thought of auto-intelligence when we pin the words "artificial" or "robot" on it? For me, it’s the fear of takeover, however far-fetched that may be. The idea of an army of robots revolting against their human creators just doesn’t quite sound like my cup of tea, but beyond that, it sounds totally possible, too. If the goal is for the intelligence of the robot to be unlimited, then what’s to stop them from making the foolish, often dangerous choices that many humans already make? It might not be likely, but it’s certainly not impossible.

Still, when you look at the data from a perspective of optimization, robots hold far more potential for improvement than I give them credit for. The speed and agility of a robot makes them prime for churning out important work quickly and precisely — a major benefit for industries like medicine and technology that hinge on an ability to iterate and execute quickly. But what about in our daily lives? Here are ways robots could change our lives in the not-so-distant future.

1. They Could be Our Built-in Chauffeurs

Self-driving cars are still a thing, and might be popping up on roads sooner than we think. But some experts are horrified by the prospect, and think that an increase in self-driving cars might also free drivers up for … ahem … other activities. With robots at the wheel, some critics predict an increase in road sex. Ridiculous? Maybe. Hysterical? Absolutely.

2. They’ll Be Giving You A Job

Thanks to new AI recruiting technologies like Mya, the preliminary responsibilities of hiring managers are being offloaded to robots. But products like Mya (My Assistant) aren’t all bad — they’re responsive, ultra-human, and will even send you tips on what to wear to your interview, wish you luck on your first day, or suggest other opportunities that might be a better fit if you aren’t selected for an in-person interview.

Applicant Management Software (AMS) is already a thing in today’s hiring landscape, and candidates who want to cut through the clutter of the robots behind the hiring software had better learn the system. More often than not, they’re the gatekeepers to the jobs waiting on the other side.

It’s no secret that people are paranoid about robots taking over their jobs, but some of the worry might be deserved. The LA Times reported that robots could take over a projected 38 percent of current U.S. jobs in the over the next 15 years, and a study by economists Daren Acemoglu of MIT and Pascual Restrepo of Boston University suggested that one robot reduces 3 to 6 human jobs in a given geographic area. I bet you’re thanking your lucky stars for that fine art degree right about now, huh?

4. They Could Be Asking, “May I Offer You Fries With That?”

(In a Jetsons-esque voice). It’s been rumored that robots might make up the next wave of fast food workers. Bots are rival fast food workers in the kitchen thanks in large part to their ability to quickly scan smart orders and assemble them in a fraction of the time. I’m okay with this, as long as they don’t fight me when I try to order my hacky, secret menu items.

5. They Could Be The New Nurses

And Physician Assistants, doctors, and surgeons, too. Robotics thought leaders and working to get robots inside doctors offices to scan patient histories and treat cases more quickly. There have already been a few robotic surgeries performed, too.

6. They Could Be Keeping You Safe

We’ve long used drones in American Homeland Security, and police have also started using robots to monitor suspicious packages. That’s all well and good as long as they don’t pull a Blade Runner and turn on us.

7. They Might Be Taking Care Of You In Your Old Age

Technologists are developing robots specifically for a variety of capacities — including elderly care, home hospice, and end of life assistance. Come 60 years from now, they might be the ones making your eggs and bringing you your pills.

8. You’ll Probably Have A Robo-Baby

Read: the mechanical upgrade from a fur baby. Humans love to anthropomorphize — as evidenced by our totally undying love for our pets. In a few decades, don’t be surprised if you see fewer dogs in bags on the train, and more robo-dogs riding alongside humans.

For administrative tasks like answering emails, taking calls, folding laundry, and scheduling events, robots could very well become the norm. And if technically keeps advancing as rapidly as it is now, they might be even more affordable than an actual human.

Because so much of AI innovation is geared toward robots capable of responsive and intelligent thinking and conversation, a few more years of innovation could make them prime candidates for logic and strategy-based gaming. If you’re having trouble getting friends to attend your game nights, give it time — you might just be playing against robots in a few years. And if that sounds scary, look at it this way: your snack budget just got waaaay more affordable.

11. They Could Be Teaching School Subjects

For better or worse, we’ve already seen online learning revolutionize our current education system. Who’s to say we won’t see robots teaching actual courses in the near future? Especially for technological and process-based subjects, the foolproof thinking and procedural execution of a robot could be useful.

With all this talk of change, it’s also entirely possible that robots will not walk among us as people. While it’s pretty likely that they’ll start to pop up in machinery and processes, robots may never be able to compete with the intellect and compassion of human beings. At this point, only time will tell. Until then, pour yourself a glass of rosé, and cheers to the fact that you don’t have to wait in line at the bank every time you want cash. Here’s to you, ATM machines.