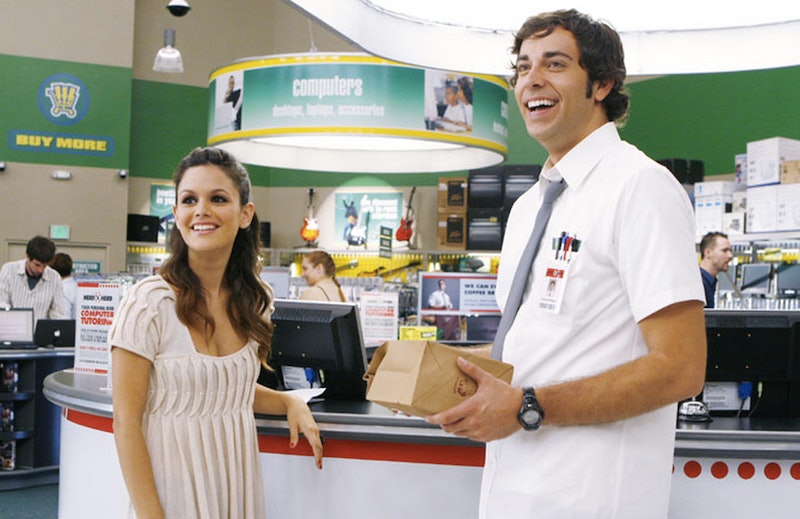 Finding a show with the power to make you grin every single time you think about it is a rare thing, but NBC's late, great spy series Chuck is definitely one of those shows. For so many viewers, Chuck is their forever favorite — that special show you can always turn to when you need a pick-me-up, full of characters that always feel like family. In fact, all you need to do is read a few of the show's quotes to prove Chuck is a fan favorite forever.

If it has been a while since you visited the world of Chuck Bartowski, Sarah Walker, Morgan Grimes, and the Buy More gang, then allow me to reignite your love for this amazing, silly, wonderful show. The most distinctive thing about Chuck may very well have been its dialogue. The characters were pop culturally savvy and always cracking jokes. Even when they were going up against bad guys like The Ring syndicate, they found ways to literally laugh in the face of danger. At the same time, Chuck was also deeply romantic and full of moments — like the return of Chuck and Ellie's dad — designed to make you sob. For these reasons, the best way to remind you of Chuck's greatness is to break out some of the show's most iconic quotes.

These Chuck quotes are so good they will have you queuing up a marathon that would make Morgan proud in no time.

The first time Chuck realized he had serious spy skills lurking in his brain is, hands down, the show's most iconic moment.

Remember the old days when Sarah and Casey never trusted Chuck to handle himself on missions? His staying in the car skills were pretty bad too, but they led to so many classic spy moments.

No one can say Devon did not earn the title of Captain Awesome honestly.

4. "What Makes You Special Is That You're Not Like Every Other Spy. You're A Good Guy And You Want To Help People. Leave The Deception To Me." — Sarah

Sarah Walker is an absolute legend. This quote is so touching in the way it reveals how she sees Chuck, but it is also a reminder of her kick-butt spy skills.

Want to break the heart of a Chuck fan? Just whisper this line to them and watch them dissolve into tears because there is no getting over what happened to Chuck and Ellie's dad.

6. "Morgan Is More Than Just My Best Friend. He's My Family! Before You Got Here, And Long After You've Gone, Morgan Is My Family!" — Chuck

Chuck and Morgan's friendship was too pure for this world.

7. "I Can't Leave The Buy More. I Won't Survive In The Real World. I'm Institutionalized." — Jeff

The spy stuff was fun, but you know you miss the Buy More insanity most of all.

Morgan and Casey's friendship was one of the most surprising relationships to come out of the show. They were such an odd couple, but Morgan brought out the best in Casey, especially when he stood up to his angry pal in the series finale.

9. "Morgan Grimes, The Boy Who Took My Pillow As His Date To The Junior Prom, Knows More About My Family Being Spies Than I Do." — Ellie

At its core, Chuck was a show about family in all of its many shapes, and Ellie was definitely the heart of the extended Bartowski brood.

Admit it, no other TV character makes you laugh as hard as John Casey.

11. "Chuck, You're A Gift. You're A Gift I Never Dreamed I Could Want, Or Need And Every Day I Will Show You That You're A Gift That I Deserve. You Make Me The Best Person I Could Ever Hope To Be, And I Want to Spend, And Learn, And Love, The Rest Of My Life With You." — Sarah

Not loving Chuck and Sarah's relationship is simply not possible, and seeing them fall in love all over again would be a privilege.

This quote is your friendly reminder you still secretly want to work at Buy More.

13. "He Thinks That, With One Kiss, You'll Remember Everything." — Chuck

Chuck's final scene was so bittersweet and so perfectly Chuck. How could you not still love these amazing characters?

Thanks to heart, humor, and warmth, Chuck will always be your forever favorite, and let's be honest, you wouldn't have it any other way.