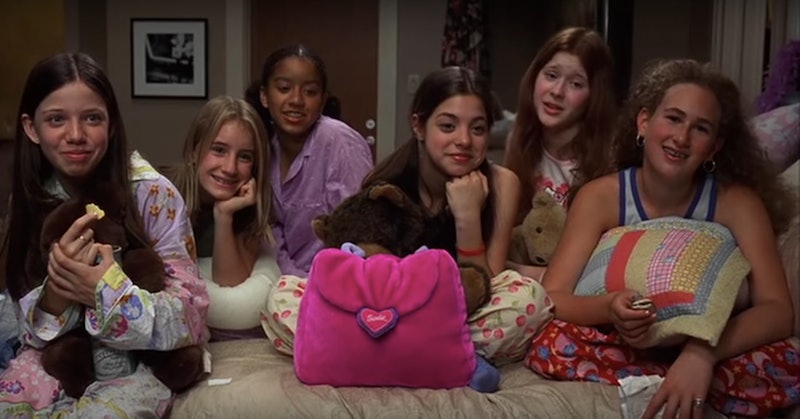 "Love is a battlefield." Back in 2004, Jennifer Garner's Jenna Rink shared those wise words, courtesy of Pat Benatar's 1983 hit song, with a bunch of 13-year-old girls looking for advice from a wise older woman during an epic group sleepover. Now, on the 15th anniversary of 13 Going on 30, those same teens — who are now on the verge of being 30 and flirty and thriving themselves — have opened up about the movie's iconic slumber party. Turns out, the less than two-minute scene has had a life-long effect on all of those involved.

So, grab some Razzles — remember, they're both a candy and a gum — and reminisce about the sleepover party that still rocks all these years later, courtesy of actors Catherine Combs, Gia Mantegna, Sydni Beaudoin, and Renee Olstead; screenwriters Josh Goldsmith and Cathy Yuspa; and choreographer Marguerite Derricks.

The film's late director Gary Winick revealed in DVD commentary that he originally didn't want to include the sleepover scene in which Jenna Rink bonds with a few 13-year-olds, including her neighbor Becky (Renee Olstead). He thought it took away from the romance between Jenna and Matt (Mark Ruffalo), but soon came to realize it was one of the best scenes in the film.

Josh Goldsmith & Cathy Yuspa (screenwriters): When we pitched 13 Going on 30, we knew we wanted adult Jenna to have a connection with a modern-day 13-year-old girl. First, Jenna would give her pretty questionable advice, and as the story moved along, it might actually become good advice. The sleepover scene is where that all kinda comes together — Jenna empowers a bunch of 13-year-old girls, but we also see that she is now empowered herself. Our original inspiration for the Jenna character was Josh’s cousin, who was 13 at the time, who told us all about her teen angst — and also that she had 344 lip glosses.

Gia Montegna ("Gina"): When I didn't get the role of Becky, which went to Renee Olstead, I guess they just decided to offer me a role as one of the slumber party girls, which in my mind was just as good. I was so excited just to be there.

Sydni Beaudoin ("Sydni"): I auditioned for Becky and got a callback for a different part in the sleepover scene .... I remember that we did have to sing a little bit of “Love Is A Battlefield” and I remember saying, “Mom, what is this?” and she sang it to me. I remember thinking that knowing that song was what got me that part.

All the actors recall the first time they met Garner, who was already a major star at that time thanks to her lead role in ABC's spy thriller Alias. But, it's how she's still inspiring them today that stands out the most.

Renee Olstead ("Becky"): I watched Alias and thought [Garner] was the most badass person on the planet, and to meet her and see that she was a normal person, not a badass spy, but a sweetheart, was awesome. When we were doing the elevator scene, we would talk and sing “Orange Colored Sky.” She was so much fun to be around.

Beaudoin: I was in the hair and makeup trailer when I first met her and she shook my hand and I remember, clear as day, how strong her handshake was. I remember noting it because Alias was around that time and she was still built and strong.

Mantegna: When I met her I kind of exploded with excitement and was like, "We have the same birthday and we both play the saxophone!” And she was a dream, she was the sweetest, most angelic person you have ever known, she’s exactly how you think she would be. She made us so comfortable.

Catherine Combs ("Catherine"): I soaked up everything she did like a sponge, watching everything she did with a childlike curiosity. The way she treated her stand-in. The way that she asked us questions and got to know us in between takes ... just seeing somebody in a leadership position treat everybody the same — that is how it should be. I worked with her for one day but it totally got inside my bone marrow, I’m so grateful for that. I haven’t run into her since that day but I thank her every time I follow her example.

Olstead: I think that’s the best education, learning from others. Watching her be professional and easy to work with, and finding little moments in a scene to make it special. It’s more than just saying words, she created someone that you cared about when watching the film.

Mantegna: She really just was my friend, she was all of our friends. Her kindness — Jennifer really showed me that was really what it’s all about ... through everything she’s been through, she’s maintained being her sweet wonderful self and I just love that about her. She’s the ultimate role model.

The Inspiration For Jenna's Speech

Pat Benatar's "Love Is A Battlefield" plays a crucial role in the sleepover scene, soundtracking their dance party and helping Jenna find the right words to say to the impressionable teens.

Goldsmith & Yuspa: “Love Is A Battlefield” is just such a great anthem for the movie. It’s so dramatic — I mean, “heartache to heartache we stand”? Yet the girls are singing it into hairbrushes — kind of the perfect blend of the super-serious, super-silly inner life of 13-year-old girls.

Beaudoin: It’s pretty iconic, but I had no idea what Jennifer was talking about in the scene. No idea. I just knew to act like I was getting inspired by Jenna's speech but I feel like the words were not sinking in at the time. I was like, "Am I blinking too much? Oh my gosh, Jennifer Garner is in front of me. Will this be in the movie?" I was just a 13-year-old trying not to mess up.

Combs: I remember even in real life thinking, "Whoa, love is a battlefield." I was probably going through some middle school breakup or something. But it’s the ultimate girl power anthem. It’s like, dust yourself off and love yourself first. I love the idea of being a self-esteem warrior.

Mantegna: When “Love Is A Battlefield” comes on, I will forever be transformed to that moment and it’s such a great story to tell: "Oh yeah, I danced with Jennifer Garner to this song." We were genuinely having so much fun and then when you finally see it on the big screen you think, 'We did that! That’s a moment in history, a moment in time, and why did I choose pigtails? That was a horrible idea."

Choreographer Marguerite Derricks, who also choreographed movies like 10 Things I Hate About You, pulled double duty working on both the film's "Thriller" number and this one.

Marguerite Derricks (choreographer): I wanted to keep the essence and the joy of [Pat Benatar's "Love is a Battlefield"] music video because it's pretty awesome, but I didn't want to recreate it. I wanted to put my own twist on it. The essence of the sleepover scene is girl power and letting these young girls be cool and strong. It was just making it fun and feel good, and if you make it fun and feel good, people really can get down.

Combs: It was really very spontaneous and organic. The director let us come up with ideas and mess around... It was sort of like we had 10 dance parties and took the best chunk of each dance party and made one ultimate dance party.

Beaudoin: I was very, very shy during that shoot, so I kind of hugged the back a lot. Originally I had a couple of lines about having braces and the day of the shoot there was another girl [Madeline Sprung-Keyser] that got brought in and I think she was actually a friend of Jennifer Garner's [ed. note: Sprung-Keyser is the daughter of producer Christopher Keyser, who gave Garner her first TV roles on Time of Your Life and Significant Others.] I remember they gave her the line about being a metal mouth and I was so sad about it. But the other girl had braces too and hers were metal and mine were ceramic so it made more sense. [Laughs] But they play the song again in the credits and you can hear us singing along to it and someone screams and that's me. It was just so unplanned but I remember excitedly telling my mom, "That’s me screaming, that’s me!"

Mantegna: They allowed us to pick what we wanted to wear from the closet, which was stunning and filled with designer shoes and clothes and boas, and then they told us, "OK, let’s just turn on the music and dance." It was Jennifer Garner and a bunch of actual 13-year-olds and it was an absolute blast. It didn’t feel like work at all, it was so much fun.

Derricks: I always say I’m the tailor, I bring in the moves and see what fits on this person’s body. Jen was just a natural mover... There was no tailoring for Jen, she was just a natural because that smile and laugh is one hundred percent real. She wasn’t worried about how she looked, she was just childlike — that’s why it’s so fun to watch.

15 years later, the movie's considered a rom-com classic. Most recently, Ariana Grande paid homage to it in her "Thank U, Next" video, putting her own twist on the moment before 30-year-old Jenna goes back to being 13 again. Even Jennifer Garner couldn't help but love it.

Mantegna: To have [Grande] introduce it to a new generation, I thought, was such a great idea. It made me feel very proud to be a part of something like that, even though it was such a small part.

Combs: It was cool and fun to see, but I’m also not super surprised that Ariana felt empowered by it because the movie's a delight. It’s a bowl of strawberry ice cream. If it’s medicine, it’s bubblegum medicine, like, "this is gonna heal me, but also it’s delicious."

As the stars of the sleepover scene get ready to turn 30, they say the movie has affected how they think of the milestone age.

Mantegna: I feel like I’m ready to get there. The movie makes it so much sweeter. It paints a picture just so beautifully of what it’s like to be that age and what you don’t have to be.

Olstead: I’m turning 30 in June, actually, and I’m really excited for my 30th birthday. I have no fear related to that at all. Everyone I know that’s in their 30s is in the prime of their life. They look fantastic, their careers are in a great place, they’re happy, they don’t have crappy boyfriends anymore.

Beaudoin: I mean, I’m definitely going to make "30, flirty, and thriving" the theme of my birthday... Maybe I'll watch it again before going into my 30th year.

What Happened To Jenna Rink?

There's no plan for a sequel, but the writers are working on a 13 Going On 30 Broadway musical based on the film. "Hopefully starting workshops this summer," Goldsmith and Yuspa, who are writing the musical, said in a joint email. If the production ends up being set in the present day, the movie's stars have some thoughts on where Jenna might be in 2019.

Mantegna: I bet you her life would be very similar to Jennifer Garner’s. She’d probably have kids and be starting a very healthy food line for children and cooking in her kitchen with her family. I just think she’d very much be the energetic youthful spirit that she always was.

No matter where Jenna Rink is now, fans will always be happy to revisit that sleepover scene, where the character turned us all into warriors.

This article was originally published on April 23, 2019