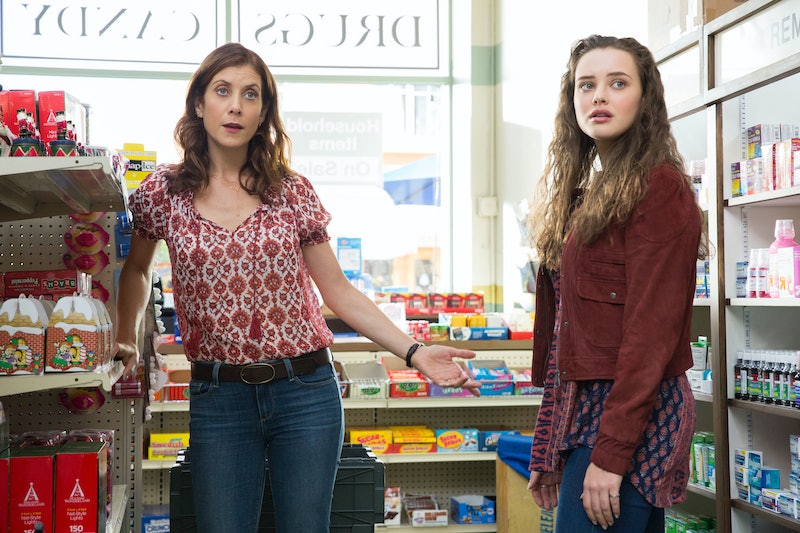 When Jay Asher's beloved young adult novel was adapted for the small screen, 13 Reasons Why on Netflix made some significant changes. Instead of learning about events solely from Hannah's perspective, viewers got to see her classmates in a new light and depth was added to these characters once we learned more about them. But, the most heartbreaking addition to the series is Hannah's parents on 13 Reasons Why. Kate Walsh and Brian d'Arcy James play Olivia and Andy Baker, and viewers see them navigate the painful aftermath of their daughter's shocking suicide. Although they've sued Hannah's school for failing to adequately protect her, they spend an equal amount of time blaming themselves and wondering, "what could I have done to prevent this?" Spoilers for 13 Reasons Why ahead.

The series was co-produced by the mother-daughter team of Mandy Teefey and Selena Gomez — and Teefey tells Bustle that she hopes parents will watch and learn from the series as well. "We just wanted to make [the characters] as real and close as possible so that kids could relate, and parents could really see 'oh, OK this is really how it is when you come home,'" she says. The series isn't simply meant to help the parents of troubled teens — it's also meant to show that no one's child is perfect, and parents can't turn a blind eye and pretend their kids will never bully or hurt a classmate.

Although parents certainly can't control everything their teens do, Teefey says accountability is a key — and mothers and fathers need to examine what's happening at home that may cause a child to act out: "I’ve been following parents that have watched the show, and they’re just all saying, 'do not be afraid to watch this with your teenager. They see this every day, so if you think that that it doesn’t happen, you’re in denial that your kid is not one of these people or has experience with these people,'" she says. "We just really had to research other teenagers and what was really going on and we did start with where they came from, their upbringing, and home life."

This is perhaps most evident in Bryce's storyline — he had a long track record of disrespecting girls before he ultimately raped both Jessica and Hannah. His classmates either enjoyed and participated in these behaviors, or simply looked away thanks to the "boys will be boys" mentality that's a part of rape culture. If Bryce's parents had been present in his life, they may have seen the warning signs and then devoted time and energy to educating him about why his rhetoric and behavior was so dangerous and unacceptable. If he'd been taught to respect women, Bryce may not have become a rapist.

Meanwhile, Hannah's grieving parents struggle to make sense of what happened during the final days of their daughter's life and why she ultimately chose to commit suicide. Even when neither parent is speaking, the questions linger in the air — what warning signs did they miss? Are they somehow to blame? In the scenes that depict Hannah's home life, she appears to put on a successful facade for her parents — and that's perhaps the scariest aspect of all. Hannah was living under their roof, but even during the family's worst interactions, her behavior could easily be chalked up to an average case of teen angst and moodiness.

Teefey says subtle clues are most often the key to discovering the depths of a teen's pain — and that's why the TV series serves a different purpose for educators and parents than it does for teens. "We just kind of wanted them to see, 'OK, these are clues that I didn’t catch on because I’m not really paying attention'," she says. "And you can’t always know, because [Hannah's] parents are very involved in her life and she always did seem fine, and it was like she was begging for attention in these really subtle moments."

Teefey drew from her own experience as a mom, and says she can recall subtle moments that had a bigger impact on her daughter than she imagined. "In one particular situation I can remember I was like 'oh gosh I’m going to bed; I can’t believe you did that,' and I didn’t realize how hard it was for Selena," she recalls.

She hopes the series will open up important conversations between parents and teens: "We wanted [kids] to see how it affected their families and how they should go to them... and they shouldn’t be ashamed of any of the issues," Teefey says. She adds that, although high school is only four years long, it can be full of traumatic experiences — even seemingly small ones.

When parents and teens open up a dialogue, she's hopeful they'll be able to have conversations about what happened to them, and how they handled it. "It was really there to create conversation and support, and for [adults] to see it from the kids’ perspective and the kids to see it from the adults’ perspective," Teefey says. So, it's also important for teen viewers to pay attention to the adults in the show — hopefully watching the Bakers' intense grief will encourage teens to seek help from their parents rather than stay silent because they fear they'll be a burden.

13 Reasons Why is undeniably painful to watch, but everyone can learn from it — and, as Teefey says, it could potentially start crucial conversations between parents and teens who watch the series together.