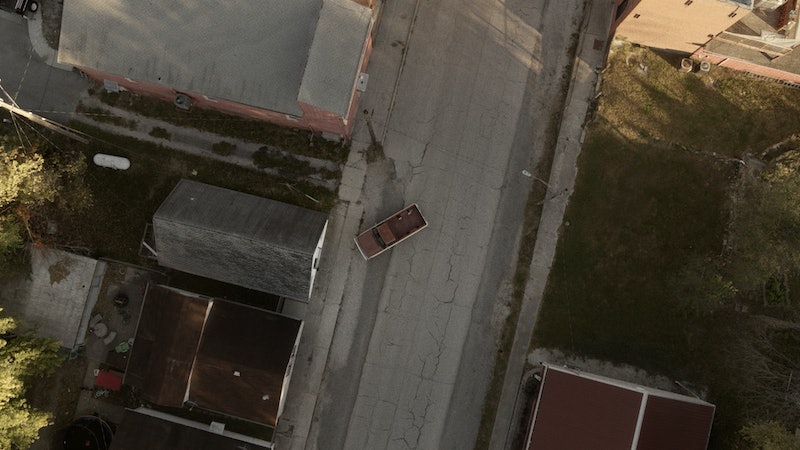 It's no secret that our culture is obsessed with true crime stories, thanks to the likes of Serial and Making A Murderer — and there are few crime stories more intriguing than an unsolved murder. Among the many facts known about the Ken McElroy shooting, the one thing that's not known is who actually pulled the trigger. That mystery will form the heart of SundanceTV's upcoming limited series, No One Saw A Thing… and it may just be the most unusual unsolved mystery you'll ever come across.

The reason the lack of resolution around McElroy's death is so noteworthy is because of the simple fact that the man was gunned down in the middle of the street in broad daylight in front of approximately 60 witnesses; and yet, to date, nobody has ever been charged with the crime. Why has no one stepped forward to identify McElroy's killer? Why was he gunned down in the first place? The circumstances around the shooting, which took place in July of 1981 in the small town of Skidmore, Missouri, help to shed light on all of these mysteries, while leaving the central question — who actually killed him? — stubbornly in the dark.

Here are 13 things you need to know about Ken McElroy and his death before you tune into No One Saw A Thing, premiering this Thursday, Aug. 1, pulled from sources including Harry MacLean, author of the non-fiction book In Broad Daylight about the McElroy case, an episode of the podcast Criminal, and an episode of the Buzzfeed series Unsolved.

1. McElroy Was A Bully

"He always had a chip on his shoulder," Harry MacLean told host Phoebe Judge about McElroy on her podcast Criminal. "His family was not part of the successful farming community of northwest Missouri. They were poor, they had come from Kansas, he kind of grew up resenting those he considered to be more successful. The kids of the farmers who were doing well, at school he was bullying them by fourth or fifth grade."

MacLean goes on to describe young McElroy as an illiterate bully who kids and adults alike were afraid of; he would steal lunch money from his fellow students and shoplift from local stores with no consequence.

2. He Was Injured In A Construction Accident

According to Buzzfeed's Unsolved, McElroy was said to have been seriously injured in an accident while working on a construction site, when a heavy steel beam dropped on him. This accident led to severe chronic pain and possible brain damage that plagued McElroy throughout his life, which some townspeople believe attributed to — or exacerbated — his violent behavior and erratic temper.

3. McElroy Was A Busy Man

Unsolved claims that, throughout his life, McElroy was indicted on at least 21 charges, sometimes being brought up on felony charges as frequently as three different times a year, ranging from theft and cattle rustling to harassment, assault, arson, statutory rape, and even shooting two people.

4. But He Got Away With Everything…

McElroy managed to escape conviction on all but one of these charges by intimidating witnesses and through the efforts of his accomplished attorney, Richard McFadin. McFadin was so good at getting McElroy off that, as Unsolved claims, rumors spread that McFaden was actually a mob lawyer.

McElroy's first shooting victim was local farmer Romaine Henry, who he shot twice in the stomach with a shotgun. Although Henry survived to personally testify against McElroy, the bully was still found not guilty. According to Judge on Criminal, he managed this by finding out where members of the jury lived and placing rattlesnakes in their mailboxes as a threat.

6. The Police Were No Help

Judge recounts on Criminal how, in response to numerous complaints about McElroy, the closest police station (14 miles away) dispatched a marshal whose sole purpose was to watch over McElroy and keep the peace in Skidmore. An armed McElroy quickly confronted and threatened the marshal and, when the officer called for backup, the police refused to come help. The marshal turned in his badge and quit the next day.

The one and only time McElroy was convicted of a crime, he shot local grocer Bo in the neck after one of his young daughters was accused of shoplifting some candy from the man's store. According to a Mental Floss article on McElroy, the 70-year-old Bowenkamp barely survived the violent encounter; but although McElroy was convicted of second-degree assault and sentenced to two years in prison, he immediately appealed the conviction and was released on bond.

What happened next would be the last straw for many Skidmore residents. McElroy showed up at the local bar, the D&G Tavern, carrying a rifle and bayonet, making "graphic threats" about finishing off Bowenkamp, according to Unsolved. Although some townspeople reported him for violating the terms of his bail by carrying a weapon, McFadin was able to delay the proceedings. On the day of what should have been his bail hearing, McElroy was back at D&G, still a free man.

Furious that McElroy was drinking instead of getting locked up, the irate citizens of Skidmore held an impromptu town hall meeting in the American Legion Hall across the street from the D&G to discuss how to handle the McElroy situation. Unsolved recounts how approximately 60 people were in attendance at the meeting, including both the mayor and the sheriff. When McElroy was spotted leaving the D&G, the crowd in the Legion Hall followed him outside to the parking lot to confront him.

As McElroy got into his pickup truck with his wife Trena McCloud, shots suddenly rang out. According to Mental Floss, the shooting proceeded for a full 20 seconds, during which time Trena was able to flee the truck for safety inside a bank, while McElroy was killed where he sat. Shell casings from at least two different guns were found at the scene, fired from somewhere within that crowd of 60-odd people.

Despite the fact that the shooting occurred in broad daylight while several dozen people watched, everyone who was there that day stubbornly claims they didn't see a thing.

MacLean sums up the townspeople's thought process on Criminal: "'Where was the law? Where was the FBI? Where were all these state patrol investigators when he was running loose? You guys couldn't take care of him, we had to take care of him,'" the author says. "It pained a lot of them, there's no doubt about that. A lot of them it didn't pain at all. But it was an easy thing for them to do, to raise their hands and lie under oath."

McCloud identified D&G owner Del Clement as one of the shooters, but Clement was never officially charged with the crime, Mental Floss writes. There was no physical evidence linking Clement to the crime, and no witnesses willing to corroborate McCloud's assertions. Although three separate grand juries were convened — and later the FBI investigated when local authorities failed to make any progress — not a single person was ever charged with killing Ken McElroy. His murder is still technically unsolved.

The McElroy story has fascinated people for the past three decades, and it's easy to see why, with its twists and turns seemingly pulled from the pages of a pulpy crime novel. Aside from MacLean's book and Judge's podcast, the case has also been covered in episodes of the podcast My Favorite Murder and the TV show Drunk History, as well as having been turned into two movies, including the 1991 made-for-TV adaptation of MacLean's In Broad Daylight starring Tony winner Brian Dennehy, Oscar winner Marcia Gay Harden, and Emmy winner Cloris Leachman. Now it's a limited true crime series on SundanceTV.

Even if you're undecided on how you feel about vigilante justice, the citizens of Skidmore are sure of their stance on McElroy's death. A common refrain among the people MacLean interviewed? "Thank god he's dead."