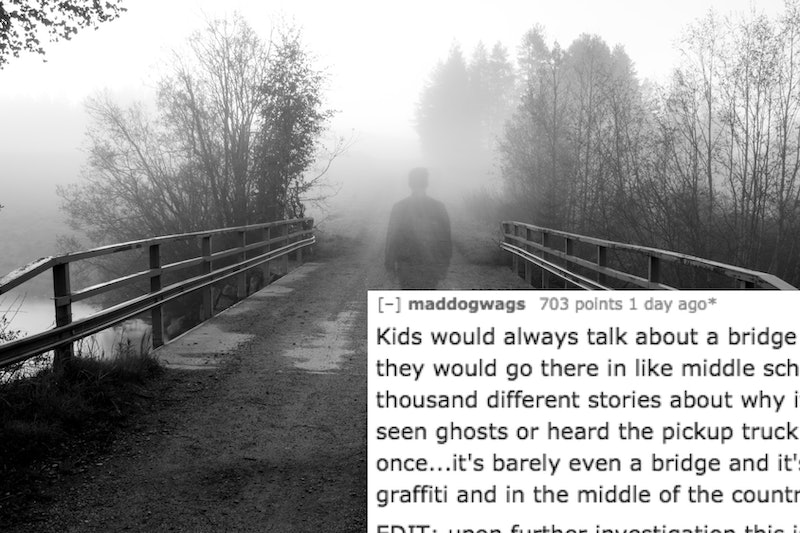 The advent of the internet has made sharing urban legends easier than ever, and as a result, many classics that were once pegged to particular geographic locations are now considered to be somewhat more universal in nature. There are, however, still hyper-local urban legends in the world — and as a recent Reddit thread highlights, sometimes you really do have to be there to get the full impact of the tale.

"Tell me the weirdest urban legends in your hometown" threads are fairly common in the AskReddit sub, but the one posted by Redditor u/SlothAgainstHumanity on Wednesday is by far one of the best ones I’ve read — mostly because it wasn’t just full of the same old stories we’ve all heard time and time again. Many of them really are the kinds of tales you’ll only know if you grow up in the area in which they originate; indeed, if you’d told me a few days ago that a place called Hairy Man Road actually exists, I probably wouldn’t have believed you. But it does — and it has an exceedingly bizarre story attached to it that’s seemingly become a part of the DNA of the town in which it’s located. That's pretty incredible when you think about it; never underestimate the power of local folklore.

So, y’know, hats off to all the Redditors that came out for this thread; I learned tons of new things from you all today as a result. Here are 14 of my favorites — and if you want more, there’s plenty more where that came from.

More like this
26 Ghost Story Podcasts To Get You Ready For Halloween
By Jessica Booth, Mia Mercado, JR Thorpe and Emma Carey
These 25 International Horror Movies On Netflix Prove Fear Is A Universal Language
By Bustle Editors
TikTok's Butter Board Might Be The New Cheese Plate
By Emma Carey
8 Completely Unserious Tips To Make Your Cuffing Season A Success
By Ginny Hogan
Get Even More From Bustle — Sign Up For The Newsletter