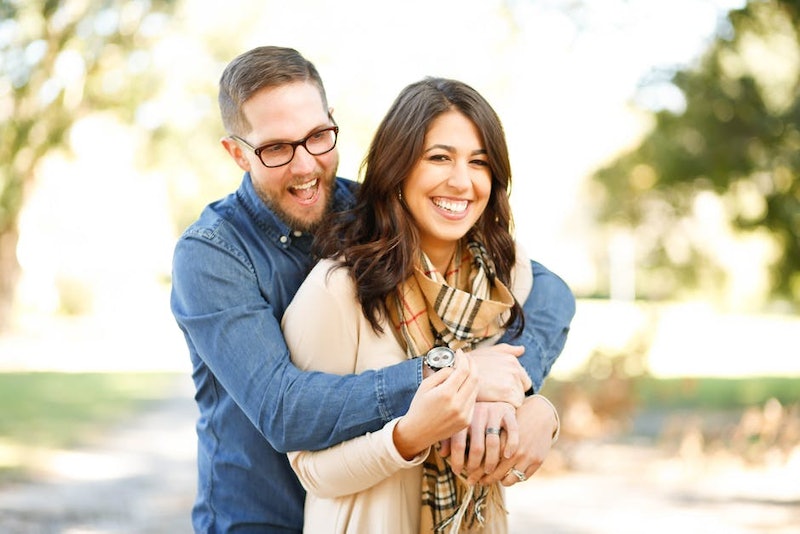 As you already know, strong and open communication is one of the most important parts of a healthy relationship. But even though it's so crucial, that doesn't mean it's easy for everyone to freely share how they feel. If your SO clams up or shuts down, you probably spend a lot of time trying to get them to open up. And it can be incredibly frustrating.

That's why, if things are going to continue, you'll both need to trust each other enough to share thoughts, feelings, and concerns. Do know, though, that this process can be tricky and uncomfortable — especially for men. "Our society expects men to possess typically masculine characteristics, such as strength, security, and toughness," relationship coach Colby Marie Z tells Bustle of men in particular. "Being open to expressing feelings is extremely vulnerable, and often not something that is ingrained into men to do freely."

While this definitely isn't true for every man, it can be a huge bummer if you happen to be dating a man and he isn't able to open up. And, it can put a strain on your partnership. If you need the convos to start flowing, read on for some some easy ways to make it easier for you both to talk — all in the name of a healthier, happier relationship.

1. Set An Example By Being As Open As Possible

It's not fair to expect your partner to be open, if you aren't willing to do the same. So get in the habit of being open, too, and hopefully he will follow. "Being vulnerable allows someone to feel comfortable sharing with you," says NYC-based therapist Kimberly Hershenson, LMSW. "By sharing your own issues, your partner is more apt to share as well."

2. Get Ready To Simply Listen

Instead of going into a conversation ready to unleash some thoughts and advice, go into it ready to listen. "Sometimes people just want to vent without hearing your thoughts," Hershenson says. "You can ask your partner if he'd like advice or feedback, but if the answer is 'no,' let him just talk." You might be surprised by what he has to say.

If you want your partner to open up, resist the urge to force them into an unwanted conversation. "Pleading with him to open up does exactly the opposite," says psychologist Dr. Joshua Klapow, who often talks about this issue on his radio show. "Give him an opening. Let him know that if he feels like talking about anything (not just his feelings) you’d love to hear it."

Once your SO knows conversations can happen freely and easily, they'll likely happen more naturally. But don't afraid to subtly encourage them. "Tell him you can talk about anything," Klapow says. "This does two things: One, it doesn’t force him into ... [a] corner. And two, it allows him to get his verbal motor running. Talking about anything is often a gateway to his feelings."

5. Ask Questions About His Day

Some people believe men are more action-based, than emotion-based. So try asking about how he reacted to things, instead of how he felt. "It is natural for women to go straight to the feeling part, but men go for the action first," blogger and relationship expert J. Hope Suis tells Bustle. By talking about what he did at work or when out with friends, he might open up more about what he thought and felt, too.

Us ladies are big on eye contact. But this doesn't always bode well when talking to your man. "One of the most important, and counter-intuitive, gestures to get a man to open up is to not look him in the eye," dating coach Hunt Etheridge tells Bustle. "When women sit a man down with the 'we need to talk' opener and sit facing him, all of his alarm bells go off and defenses go up." It's much better to sit side-by-side. Or...

Probably the best place to bring up feelings and have a heart-to-heart is in the car. "The lack of direct eye contact and distraction of driving can make what might normally feel like an awkward conversation a little more comfortable, because there isn't so much attention or pressure on him to 'perform,'" says Marie Z. "Talking while sitting side-by-side versus facing one another feels less intimidating!"

8. Approach Things From The "Side"

I know, again with the "side" thing. But this time I mean mentally, instead of physically. "Come at a situation sideways instead of directly," couples consultant and coach Lesli Doares tells Bustle. "Talk about something related you heard on TV or read online. Go from generic situation to something more specific in their life. Ask about a situation you’re experiencing and how they might handle it." These tips can open the door to deeper conversation.

9. Take His Personality Into Consideration

When chatting with anyone, it always helps to take their personality — and likes and dislikes — into consideration. "Pay attention to who your guy is... is he an introvert, a creative, a science/engineering guy, spontaneous, deliberate? How he experiences life will be a clue to how to engage with him," says Doares. "Think of getting him to open emotionally like you do about foreplay to get you to open up physically. Don’t just jump in and expect him to respond."

10. Play To His Strengths

As with anyone, men don't like to feel judged or like they're failing. So try to avoid any judgment when having a frank convo. And, as Doares tells me, play to their strengths. "Talk about how you admire something they did and ask about their thinking and experience around it." It's a handy trick to get anyone talking.

11. Talk While Doing Something Else

Again, guys aren't big on heavy, one-on-one conversations, according to experts. So try to avoid them at all costs. "We almost never look each other in the eye. It's too intense for us," Etheridge says. "Instead, we golf, fish, sit at the bar or play video games next to each other, which then gives us a safe space to talk about our feelings."

12. Figure Out His "Love Language"

There's a test you both should take that looks at the Five Love Language, meaning the ways you give and receive love. As therapist Montigus Jackson, LMHC, CAMS, says, "I think knowing your partner's love language will really help in the process of getting your partner to open up ... Most men are not easy to open up, so knowing how to speak their 'language' will go a long way." And vice versa.

13. Give Him Room To Practice

Since opening up doesn't come naturally to everyone, it's important that you give your partner plenty of time to get better at it. "Men have to work at expressing feelings in some ways," Jackson says. "We are wired a little different than women, so it takes some actual real life practice for men to feel comfortable expressing how they truly feel." And that's OK.

14. Be Cool With Whatever He Has To Say

Of course you're entitled to your opinion, and you should share what you feel, too. But when you're both getting used to sharing emotions, let your SO speak without being made to regret it moments later. As Suis tells me, it's not uncommon for couples to bicker after sharing deep thoughts or concerns. And, if you want them to feel OK about sharing thoughts, such a reaction should be avoided.

The general take away from this article is that men and woman are, in many ways, very different when it comes to how we communicate. That's why, if things aren't going smoothly with this whole "opening up" business, try to accept it. As Suis says, "If we can find a way to work around that and appreciate that, we can co-exist in more harmony."

Hopefully you'll both be able to feel more comfortable opening up. But it may take some time, and it'll definitely take some practice.