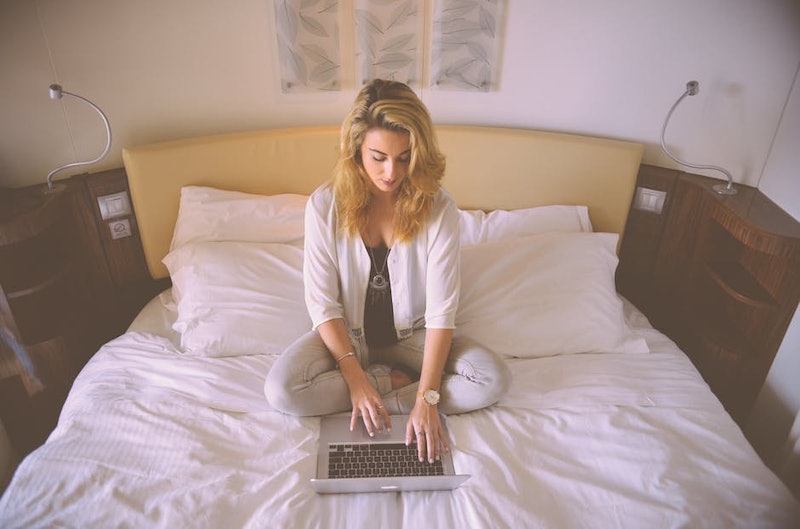 Sometimes it's nice to spend a night (or a weekend) binge-watching Netflix. You know, just you, your screen, and some delicious takeout. It truly can be the most relaxing thing ever —especially if you have a list of addicting Netflix shows to try.

If you can find a drama series or a comedy show you like, you'll pretty much be good to go. But, as we all know, that's often way easier said than done. I can't count how many time I've snuggled up with some snacks, only to spend the next two hours clicking through all the choices Netflix has to offer. Or — what's often worse — getting an episode or two into a show only to realize it's utter crap.

If this describes your supposedly "relaxing" Netflix evenings, then you'd probably like to know which shows are worth checking out. Which ones are actually worth the time, and which hold up through the entire series? Well, my fellow Neflix bingers, I've sifted through and narrowed down the list for you. Whether you're craving sci-fi or horror, or would rather watch something sweet, I promise there's something on this list for you. The following suggestions are all super good, so get ready to get comfy and get addicted to your new favorite show.

The OA follows the story of a blind girl who goes missing, only to return to her family with her sight restored. (Wtf, right?) If you love strange dramas like Westworld, this one might be your new addiction.

2. Abstract: The Art Of Design

If you've ever wondered "how did they make that?" then this show will blow your mind. It's all about design, technology, and the people whose job it is create.

Black Mirror is one part social commentary and one part sci-fi drama. With a different theme and story for each episode, it'll leave you thinking about technology, social media, and how it all affects our lives.

This sci-fi drama series, created by sisters Lana and Lilly Wachowski, features a wide array of characters and explores gender, sexuality, and religion. Even if sci-fi isn't your "thing," the characters will be sure to keep you watching.

I may not be the biggest football fan in the world, and yet it's hard not to recommend Friday Night Lights. The show follows the stories of several people in a small Texas town, and covers so much more than the game itself.

This is perhaps one of the most adorable shows ever. It's a baking contest, but not the cutthroat kind we're so used to here in America. It's sweet, it's funny, and it will make you want to bake something ASAP.

Oprah's new drama about a Tennessee family and their life in a megachurch is full of lies and scandal. It's seriously addicting.

In what looks like a live action video game, this show follows extreme athletes from all over the world as they try to tackle an obstacle course called the "beast." It sounds so silly and yet it's hard to look away.

If you love crime dramas but have yet to check out Narcos, please plop down with your laptop right now. This original Netflix series follows the story of cocaine manufacturer Pablo Escobar and his run ins with the DEA and drug lords. Seriously intense.

If you loved the 1960 Alfred Hitchcock film Psycho, then you already know all about the Bates family. In this psychological horror prequel, you'll get to see Norman and his mom buy the motel and then slowly start to unravel.

Comedian Marc Maron is known for his great standup, as well as his fascinating interviews on the "WTF with Marc Maron" podcast. So really, it makes perfect sense that his television series would be equally as great. Maron plays a fictionalized version of himself and it is funny.

Chewing Gum is a British sitcom featuring the hilarious character Tracey Gordon. She's a virgin who wants to have sex and is willing to do whatever it takes to score a date. The situations she gets herself into are painful to watch, and yet somehow incredibly relatable.

Comedy Bang! Bang! will be your new go-to show if you've been in the mood for some weird, irreverent comedy.

When sitting down to relax with some Netflix, "history" isn't aways the first genre that comes to mind. And yet Oliver Stone's new series is so interesting you'll find yourself watching one episode after another. (I promise.)

Twin Peaks is a campy crime series by David Lynch and Mark Frost. It originally aired in 1990 and has since been ranked among the greatest TV dramas ever made. Definitely worth a first (or second) look.

These shows are incredibly addicting, so sit down to watch at your own risk. You very well may spend the entire weekend in a Netflix blur.