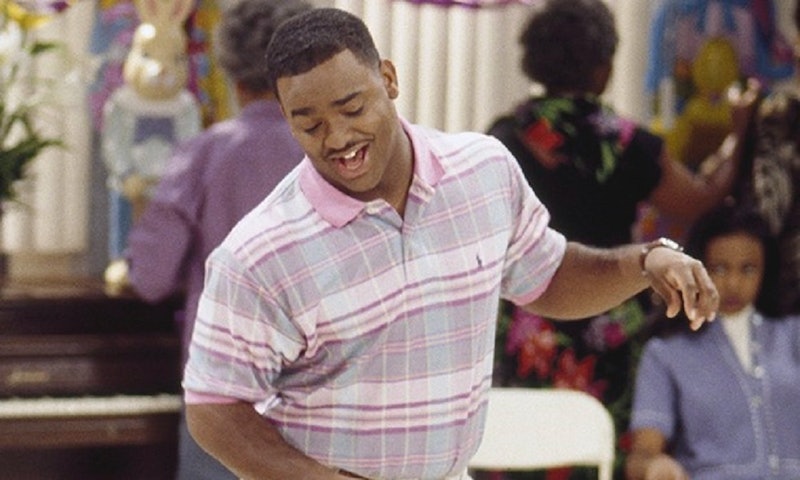 In the grand history of sitcoms, I think everybody can agree that the Fresh Prince of Bel-Air's Carlton Banks is one of the funniest characters of all time. And it isn't just that he was hilarious, but also that he was unique. It's still difficult, for instance, to think of a sitcom character who has a personality equal to Carlton's. He's awkward, snooty, sweet, short-tempered, and endearingly optimistic, but most importantly, man could he dance. His dancing in Fresh Prince is truly iconic, and as some of the best Carlton dance scenes prove, he didn't just have the greatest moves, but all the funniest ones, too.

There's just something about how mercilessly joyful the character always looked while he was in the midst of one of his limb-flinging bouts, which truly made Carlton's dancing something else. His over-enthusiasm for movement, sheer amount of unparalleled rhythm, and love for the most uncool music possible added up to some of the greatest comedy moments on TV. Seriously, if you ever need some inspiration to bust some moves somewhere or simply need to feel pumped for life, then I heartily recommend you watch any of the following dance scenes.

1. The First Time We Discovered His Great Love For Tom Jones

At the same time, we fans discovered our absolute adoration and respect for those moves, too. Work it, Carlton.

2. The Time Will Accused Him Of Not Knowing How To Dance

3. The Time He Stripped To Clear His Gambling Debt

I mean, there's just so much to love about this. Every single one of his moves is absolute dynamite. Right up until his mom makes him stop, that is.

4. The Time That He Was A Smooth Criminal (In His Dreams)

Though his Courtney-Cox-inspired dance is truly iconic, Carlton totally vibed off Michael Jackson's signature moves throughout Fresh Prince. This dream sequence was ideal for celebrating that fact.

5. The Time He Completely Owned The Soul Train Stage

Speaking of which, Carlton's worship of Jackson took center stage when he completely dominated the open floor of Soul Train, and yup, he totally killed it.

6. The Time He And Will Jumped On It

I really don't need to tell you that this dance is basically one of mankind's greatest achievements, do I? The proof is right there in those hip actions, people.

7. The Time That His Music Tastes Progressed Beyond Tom Jones

That's right. Those musical tastes can even encompass other songs with the exact same capacity for horrifying his cousin, such as this perky classic by the Fifth Dimension.

8. The Time He Taught Nicky Some Of His Best Moves

This clip should really come with sort of a warning, because I simply cannot deal with how unbelievably cute it is.

9. The Time He Took Speed At The School Dance (And It Ended Really Badly)

Sure, his moves are out of sight, but they're also completely terrifying and ended with a super emotional trip to hospital — the memory of which still reduces me to tears.

10. The Time He Met Oprah Winfrey And Had Absolutely Zero Chill

Television may never again experience a single person who can so perfectly emote a talk show theme song with the mere swinging of his limbs.

11. The Time He Was Truly The Greatest Jingle Bell Rocker

This is a little something I like to call "The Jingle Bell Jig," and I like to believe that it's the dance actual angels do to commence the holiday season.

12. The Time That He And Will Were Backup Dancers For Ashley

And they were basically the best backup dancers ever. Sorry to the Katy Perry shark from Super Bowl 2015 — there have only ever been two champions of the backup boogie, and it's these guys.

13. The Time He Made His Moves Into A Deeply Religious Gesture

14. The Time His Singing Group Butchered A Commodores Classic

Oof, those are some stiff, supremely awkward-looking dance moves right there. Definitely not his best work.

15. The Time He Got High On Laughing Gas And Danced For William Shatner

OK, so his dancing only makes up a tiny portion of this delightful bout of dentist based insanity, but the fact remains: If you're going to accidentally get high on laughing gas and dance for somebody, then make sure that person is William Shatner.

16. The Final Ever Dance

No, you're the one who's crying, dammit.

Sixteen scenes through, and not only am I totally pumped for life now, but I'm also absolutely ready to make the world my dance floor and bust out some moves. Let's do this.