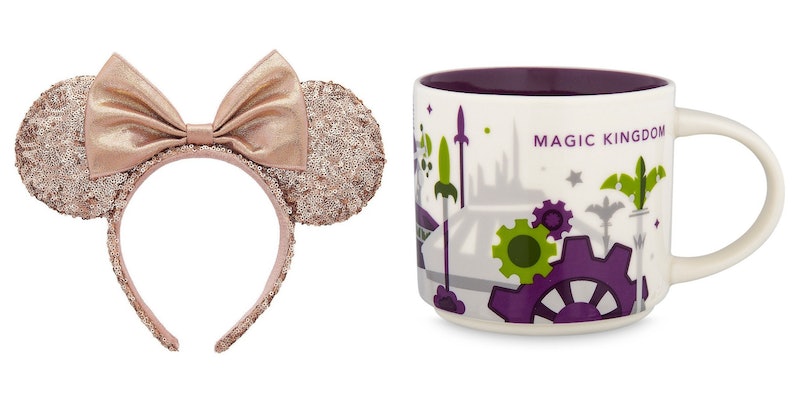 So, hey, here’s a fun secret: You can buy a bunch of merch items once exclusive to the Disney Parks online. They’re not always available online as soon as they debut within the parks themselves; if you’re willing to wait a bit, though, they often find their way to Disney’s e-retail store, shopDisney. Patience, as they say, is a virtue

Merch has always been a big part of the Disney experience. The mouse ear hats and headbands are perhaps the most iconic; originally created in 1929 and then popularized by The Mickey Mouse Club, they’ve been a staple souvenir at the parks ever since Disneyland first opened in the 1950s. In recent years, though, Disney has really begun leaning into exclusive, trending park merchandise — spectacular items ranging from special edition mouse ears to beautiful housewares — which, when first introduced, can often only be found at the parks themselves. Remember when the Disney Dress Shop collection premiered at Walt Disney World in 2017? The Disney Parks Blog post about it specifically noted, “This collection will not be available via the Shop Disney Parks app or Disney Parks online store at time of launch.” Cue the sighs of adult-sized Disney lovers everywhere.

But hey, guess what? Two years later, those dresses are on shopDisney. So are a lot of those internet-breaking mouse ear headbands that have gone viral recently. In fact, shopDisney is full of items that were originally made especially for the parks. Unfortunately there’s not an easy way to search for them — but if you scroll down to the full item description of a given item, it’ll have a special note if it was made specifically for one of the parks: Something like, “Created especially for Walt Disney World Resort and Disneyland Resort.”

These “Potion Purple” mouse ears debuted at the World of Disney store in Walt Disney World’s Disney Springs Marketplace at the very end of 2018 — but you don’t have to go to Florida to get them anymore!

The Starbucks YOU ARE HERE mug collection was developed specially for the Disney parks — and for quite some time, you could only get them on Disney property. They became available at shopDisney in the fall of 2018, though, eventually becoming as great a hit online as off. Choose from the Magic Kingdom, Epcot, Hollywood Studios, Animal Kingdom, California Adventure, and Disneyland Park.

The Disney Parks Food Icons collection arrived online in early 2019, enabling Disney fans to take home their love of Mickey waffles and Dole Whip in the most literal way possible: The collection is full of housewares adorned with classic Disney park snacks.

The opening of Disney Springs in 2016 brought with it the Disney Dress Shop collection — a delightful line of skirts, dresses, and other clothing items with a retro-style flare. Initially only available at the Cherry Tree Lane shop in the Marketplace Co-op, they later spread to various other locations, finally ending up at shopDisney. The designs rotate on occasion, but they all tend to have similar silhouettes; this dress features a Monsters, Inc.-inspired door print.

Did you know that the Disney parks have an exclusive line of pet gear? I did not, until just now. It’s called the Disney Tails collection, and initially debuted at select stores in the Disneyland and Walt Disney World resorts in 2015 before becoming available elsewhere. Also, it has HAUNTED MANSION PET COSTUMES, and that is GLORIOUS.

Disney’s spirit jerseys seem to awaken a special kind of nostalgia in people — they go BANANAS whenever a new one is released. Alas, some of the favorites of the past, like the Princess spirit jerseys and rose gold spirit jerseys, are NOT currently available on shopDisney — but there are plenty of other options, many of which were also created specially for the resorts, too. This retro-style jersey, which definitely brings up all my memories of visiting Disney World in the late ’80s and early ‘90s, features metallic ombre artwork. Note that shoppers are limited to buying two of these suckers — no more.

These, as I recall, were one of the first pairs of mouse ears to break the internet recently; they arrived in 2017 when we were still deep into the rose gold trend, and people couldn’t get enough of ‘em. Now they’re available online — as are the millennial pink mouse ears everyone coveted in 2018.

Y’all, there is an entire collection of merch that was made specially for the Florida and California resorts featuring a version of Mickey dressed up as a hipster, and… I can’t even. It’s amazing, but I cannot. If you, however, have NOT lost your ability to even, you can snag this travel mug from collection online. You’re welcome. (Or maybe I’m sorry.)

9. Be Our Guest Tableware

Be Our Guest Dessert Plate
shopDisney

We got our first glimpse of this Beauty and the Beast-inspired tableware collection when Disney Home opened at Disneyland’s Downtown Disney District in 2018, and I am still lusting after it. Happily, some of it is available on shopDisney. Hoorah!

Like the Dole Whip doormat, this crossbody bag is part of the Disney Parks Food Icons collection. The “pepperoni” are GLITTERY and SHAPED LIKE MICKEY’S HEAD. It is absurd, and I love it.

This set of four originally created for both the East and West Coast Disney resorts includes notepads shaped like a variety of mouse ear hats: Stitch, Donald, and good old-fashioned Minnie and Mickey. Your to-do list has never been so fun.

Push the button on the top of this Beauty and the Beast-inspired cold cup and you’ll get a beautiful little light show inside the rose’s dome. It’s MAGICAL.

Mouse ear headbands not your jam? This hat is a little more subtle, as well as classy as heck. Keep the sun off your face in style with a sparkly, sequined topper in a “Briar Rose” gold lamé design.

There’s a lot to love about the Haunted Mansion — it’s a classic for a reason — but I’ve always thought the graveyard out front is a particularly nice touch. Previously only available at the parks, these coasters let you recreate that rhyme-filled little delight at home.

That rose gold spirit jersey I mentioned earlier might be a thing of the past, but the Potion Purple one created exclusively for Disneyland in California can be yours now, thanks to the wonders of the internet.

Head on over to shopDisney for more. Take your time exploring; there’s lots to see. Now if you’ll excuse me, I, uh, have to go find my wallet…