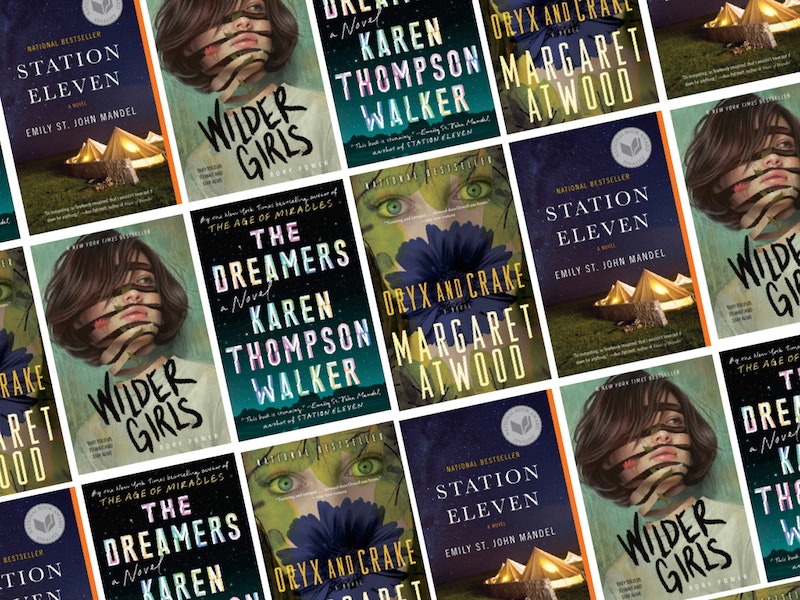 The novel coronavirus, SARS-CoV-2, and its associated disease, COVID-19, are on the rise in the U.S. The virus has caused a ripple effect across the country, leading to the cancelation of popular festivals like SXSW, and the delayed releases of top movies such as No Time To Die. Public health officials are working to contain the spread of the virus, which causes shortness of breath, fever, and cough. More than 80% of people who contract SARS-CoV-2 experience very mild symptoms, but some populations are at high risk of complications, including the elderly and those with certain health conditions.

In uncertain times, many look to forms of entertainment that reflect their realities to make them feel less alone. Which we're now seeing firsthand. The 2011 Warner Bros. film, Contagion — which stars Gwyneth Paltrow, Jude Law, and Kate Winslet and centers on a nationwide pandemic — has become majorly popular on streaming platforms this year. It was even the studio's second-most-watched film on iTunes in February, according to BuzzFeed.

Yellow fever overtook Philadelphia in 1793, when refugees fleeing the disease unwittingly spread it to the local mosquito population, which then distributed it throughout the city. Speak author Laurie Halse Anderson explores the realities of day-to-day life for a 14-year-old girl caught in the middle of the outbreak in Fever 1793.

Oryx and Crake by Margaret Atwood

Oryx and Crake is the first novel in Margaret Atwood's MaddAddam trilogy, which traces humanity's existence in the wake of an epidemic caused by a so-called miracle pill. Atwood lays out the origins of the downfall in this novel, which centers on two college students, Jimmy and Crake, and the trafficked child Crake "rescues" to become his girlfriend.

In this 1987 medical thriller, an untreatable virus that only seems to target medical personnel and their patients sends CDC investigator Melissa Blumenthal on a mission to contain and treat it. As details emerge about the virus' spread, however, Blumenthal begins to wonder whether someone is manipulating the epidemic from behind the scenes.

A Beautiful Poison by Lydia Kang

Set in New York City during the 1918 Spanish flu epidemic, Lydia Kang's A Beautiful Poison centers on Allene, a socialite engaged to a man she does not love, who suspects that some of the flu's well-to-do victims were not sick with the disease at all. Someone is poisoning New York's elite, and Allene aims to find out who and why.

A Matter of Days by Amber Kizer

In the midst of the fictional Blustar Pandemic, newly orphaned siblings Nadia and Rabbit must fall back on their survivalist training in order to make it out of Seattle alive. On the other side of the country, the children's grandfather has built a secure compound, and it may be the only place they'll be safe in this awful new world. But without a way of contacting their relatives, Nadia knows she's driving herself and her kid brother toward a great unknown.

The Grace Year by Kim Liggett

In Garner County, the young women are magical — born with the ability to lure men to their doom. To prevent the girls' magic from destroying their communities, their leaders require them to spend the year after their 16th birthdays in the woods. This "grace year" is said to rid them of their magical abilities, but almost no one returns home whole, thanks to poachers who hunt, maim, and kill the grace year girls. The men believe that the young women carry a contagious curse, and they're out to put an end to it.

Years after a flu pandemic destroyed human civilization, a troupe of Shakespearean actors known as the Traveling Symphony journey on a two-year circuit around the Great Lakes, performing at the small encampments they find along the way. This Arthur C. Clarke Award-winning novel examines how humanity may rise like a phoenix from civilization's ashes, and it's a must-read during the COVID-19 scare.

The Last One by Alexandra Oliva

When twelve contestants agree to compete on a new reality show that will completely cut them off from civilization, they assume that the dead bodies and broken store windows they encounter are all part of the producers' gambit for good TV. They don't know that a virus has swept the nation, or that they may be the only survivors.

Located on the edge of an island forest, the Raxter School for Girls was already isolated before the Tox hit. Now, the school is under quarantine, its populated drastically reduced, the survivors mutated but still kicking. The government has promised to send help to the Raxter School any day now, but as tensions and fear mount inside, one girl will attempt an escape into the Tox-ridden wilds, and her friends will dutifully follow.

The Blondes by Emily Schultz

In Joyland author Emily Schultz's 2012 novel, The Blondes, a new strain of rabies affecting only blonde women sweeps New York City, leaving light-haired women with no choice but to turn to dyes, wigs, and elaborate hair accessories to hide their natural color. It's funny, it's violent, and it's a damn good time.

When a disease that causes amnesia and death spreads across the U.S., Joy finds a silver lining: immunity to the illness that's driving the country into despair. Traveling freely through a desolate landscape, Joy makes her way slowly toward Florida, where she hopes that her long-lost birth mother will be waiting for her.

The Dreamers by Karen Thompson Walker

A contagious sleeping sickness plunges the ill into a state of constant dreaming in this novel from The Age of Miracles author Karen Thompson Walker. The Dreamers is a hodgepodge of stories, all centered around a SoCal college town, where the sickness has taken hold. Living under quarantine, students, teachers, and their families must reckon with the rapidly shifting environment, as the diseased dream intensely around them.

In Connie Willis' much-lauded Doomsday Book, a 21st-century time traveler prepares for a mission in the plague-ridden 14th century, only to have things go horribly awry. Knocked unconscious upon her arrival, Kivrin loses track of her entry point, which is to be the site of her exit when the time comes to leave. As she struggles to correct the error, a deadly influenza outbreak threatens all of Oxford's 21st-century operations, including those of its time-traveling history department.

The Plague by Albert Camus

Albert Camus' classic novel follows a plague that sweeps the French Algerian city of Oran. Focused on the townspeople — from doctors to children to fugitives — The Plague is a social commentary on the human condition in the midst of an epidemic.

The Companions by Katie M. Flynn

After a massive viral outbreak, one company brings the dead back to life by preserving their consciousnesses inside new bodies. Those who cannot pay for the service become servants to clients who rent them, which is exactly where The Companions' protagonist, 16-year-old Lilac, finds herself at the novel's opening. But Lilac is determined to get out of her contract, come hell or high water, because she's got a murder to solve — her own.