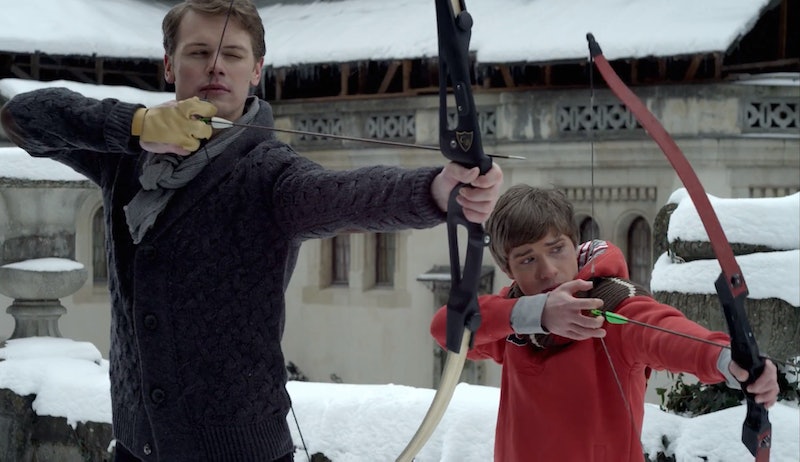 From everyone's favorite highlander from Starz's Outlander to one of The O.C.'s coolest residents, Hallmark movies have attracted quite a few familiar faces. The genre will always have its stalwarts, but it's nice to know that a few unexpected actors have had their turn at playing characters who visit their winter wonderland hometowns just in time to drink egg nog and find the loves of their lives. Hallmark Christmas movies can be a bit predictable (OK, a lot predictable), but the sheer amount of joy they bring during the holiday season makes them a sweet treat on par with fresh baked cookies. And the more actors who get in on the holiday movie action, the better, because there's nothing quite like flipping over to the Hallmark Channel only to discover Jamie Fraser in full prince mode wooing a woman from Buffalo.

Knowing that these 17 actors starred in Hallmark Christmas movies is a total holiday miracle.

1. Sam Heughan, A Princess For Christmas

Sam Heughan is best known for his role as the swoonworthy Jamie Fraser on Outlander, but before he put on his kilt, he starred in the adorable A Princess for Christmas. In the movie, he plays a prince who falls hard for a woman from Buffalo when she arrives at his family's palace just in time for the holidays.

Anne Heche (who has done a surprising number of Hallmark movies) is the primary star in Silver Bells, but a young Victoria Justice plays the small role of a girl named Rose. Despite her screen time being limited, it's still fun to see the future Nickelodeon star having a Hallmark moment.

Before she landed the leading role in Netflix's The Holiday Calendar, Kat Graham practiced her Christmas movie skills with a small role in Our First Christmas.

Dawson's Creek star James Van Der Beek will charm you as a widower with unruly twin boys in this sweet holiday movie.

Whether you know Sean Astin as Lord of the Rings' Samwise Gamgee or as Stranger Things' Bob Newby, you'll be excited to know that's he done not one, but two Hallmark holiday movies.

7. Rachel Blanchard, The Case For Christmas

Are You Afraid of the Dark?, Peep Show, Fargo — Rachel Blanchard has done it all, including starring in a holiday movie where Dean Cain has to defend Santa Claus in court.

Yes, even the woman who brought Princess Leia to life took a turn appearing in a Hallmark Christmas movie. Carrie Fisher plays a ghost trying to help her former employee see the error of her ways before she ends up just like her in this twist on A Christmas Carol.

10. John Brotherton, Help For The Holidays

Just in case you thought the holiday movie merriment was only reserved for Full House cast members, you can catch Fuller House's John Brotherton in Help for the Holidays.

The Nine Lives of Christmas has it all — Brandon Routh playing a fireman and adorable cats.

OK, Drew Scott is better known for his gifts as a celebrity realtor than his acting skills, but never forget that he once appeared in a Hallmark Christmas movie making your Property Brothers' holiday special dreams more or less come true.

Jake Epstein charmed your socks off on Degrassi: The Next Generation, and he'll do the same in this sweet holiday movie that's like Sisterhood of the Traveling Pants with a Mrs. Claus outfit.

Proving there's nothing he can't do, Dermort Mulroney takes on the leading man role in this Christmas movie about Santa needing a woman to reopen her hotel so he'll have enough Christmas magic to power his sleigh (yes, really).

The queen that is Mariah Carey doesn't just star in A Christmas Melody, she's also the film's director.

The worlds of Will & Grace and Sex and the City collide as Eric McCormack and Kristin Davis co-star in A Heavenly Christmas.

Autumn Reeser is one of the best parts of The O.C. Season 4, and she's also pretty great as a woman who gets a second chance at life just in time for the holidays in A Bramble House Christmas.

These 17 actors prove you never know who'll you'll find when you tune into a Hallmark Christmas movie.