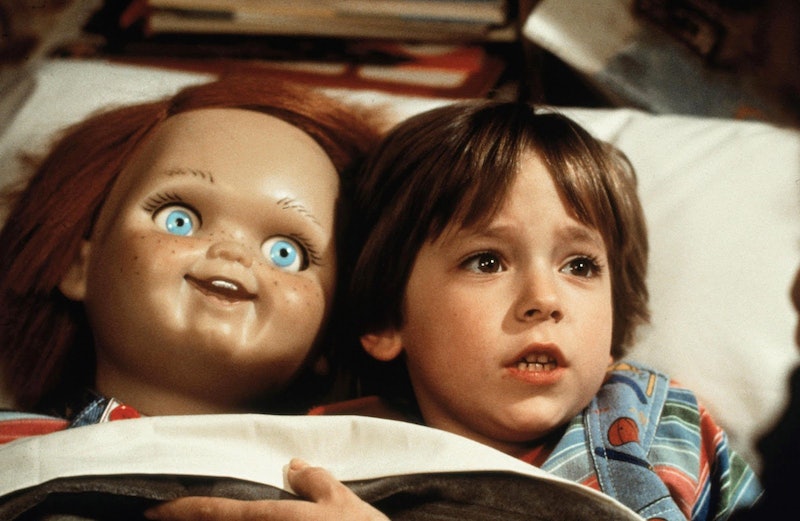 We're not too far away from the spookiest day of the year: Halloween. The season is upon us, full of goblins, lanterns, ghosts, and candy corn, and retailers are already showing off the Halloween bug by filling store aisles with Halloween candies and decor. So as the stores prepare themselves for the holiday, so can you, by getting into the Halloween spirit with old school horror films. These 19 nostalgic scary movies will leave you both reminiscing and freaking out this Oct. 31, and really, who doesn't love that combo?

The '80's, '90s and early 2000s delivered plenty of great scary movies, and many of those films still provide a ton of Halloween costume inspo today. So it's fitting, then, to spend this fall revisiting all of your all time favorite spooky films streaming on the major platforms. Some of the movies on this list might seem cheesy now, while others will still feel completely horrifying, but all of them will make for great watches this Halloween season So grab some candy corn, dim the lights, and get ready to be totally scared by these 19 nostalgic scary movies.

1. I Know What You Did Last Summer

Who didn't scream the line "What are you waiting for?!" in the middle of the street after watching this?

The Ghostface killer was a freaky reminder that no one was safe.

Jeepers Creepers was terrifying in the early 2000s due to its spooky, isolated country roads and dark humor.

The Ring made us all scared of two things: the girl who crawled out of the TV, and picking up the telephone after watching the film.

Reminder: if you're sensitive to sound and being alone, don't watch this film in an empty house.

Remember the line: "I am your daughter"? Yeah, just that alone probably had you creeped out for days.

Who would've thought that this young boy could be so evil?

This documentary-style horror film scared us all because it felt so realistic.

No, this movie is not about how you feel towards your ex. It's actually about a house that's the site of a curse that lingers in a specific place and claims the lives of anyone that lives in it.

Anyone else try putting a foil cap on top of their heads to ward off evil spirits or aliens?

Chucky loves to kill, and seeing him wreak havoc in this movie is still a terrifying experience today.

Urban Legend follows a group of college students as they discover that a series of gruesome murders at their university resembles old urban legends.

28 Days Later was one of several movies in the zombie craze of the early '00s. The movie's follows a young British man waking up from a coma to find his entire city deserted due to infected humans.

This movie features a pre-Friends Jennifer Aniston as she is terrorized by a leprechaun.

Remember how much anxiety the box gave you at the end of the movie? Ugh.

Yup, another zombie film. In Dawn of the Dead, the zombies were so fast, and so sneaky.

19. The Silence Of The Lambs

Dr. Hannibal Lecter is a violent psychopath who practices cannibalism. You will never get the scene of Hannibal eating brains out of your mind.

Halloween is drawing close, so let these movies get you set for the season.