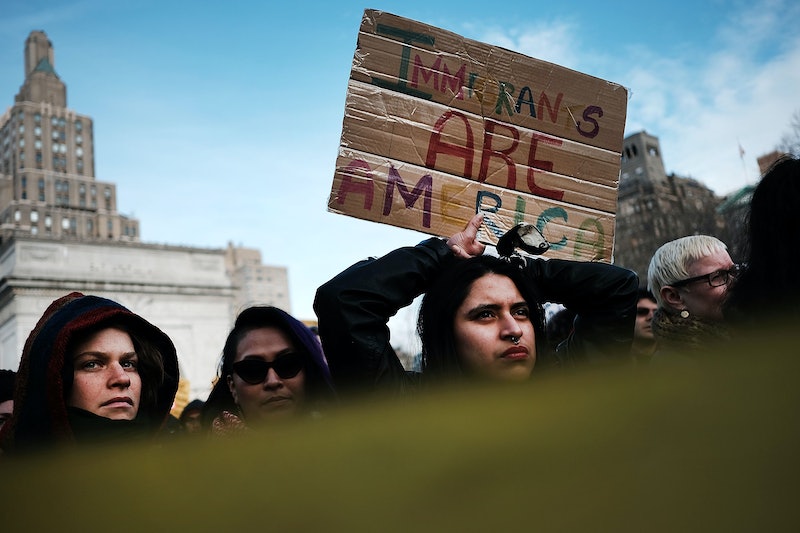 Immigrants are the very foundation that America was built on. Unless you're Native American, your ancestors came to this country from somewhere else in search of the "American Dream." You've likely heard the saying, "A picture is worth a thousand words, and these photos of "A Day Without Immigrants" from social media show everything you need to know about today's strike. The movement is a direct response to Donald Trump's immigration agenda, and brings into perspective just how relevant immigrants are to the economic and cultural fabric of the United States. (This last bit really shouldn't need explaining, and yet, somehow, here we are.)

Many cities around the country are closing their doors Thursday, Feb. 16 to protest Trump's proposed immigration policies, including the now-on-hold temporary travel ban, the wall between the United States and Mexico, and other policies that single immigrants out for unfair scrutiny, like Trump's proposal to publish a weekly list of crimes committed by immigrants. Starting in early February, ICE raids have also reportedly been targeting people in at least seven states.

That's where "A Day Without Immigrants" comes in. As Bustle's Noor Al-Sibai recently reported, the movement is "spearheaded by a general strike by Latinx workers in Washington, D.C." to protest the ICE raids; Milwuakee, Wis. also saw a "Day Without Latinos" rally, and many businesses throughout D.C., Pennsylvania, North Carolina, and other cities in the United States are also closed for the day in honor of the protest. Other business that are keeping their doors open have pledged to stay open late and donate a portion of proceeds to nonprofits that aid immigrant communities.

The protests, boycotts, and closures seek to send a strong message to the Trump administration that America supports its immigrant population. According to NPR, in Los Angeles alone (where I live), "Immigrants, regardless of legal status, contribute 40 percent of L.A. County's gross domestic product: almost $300 billion a year." In fact it's pretty impossible to even imagine how Los Angeles would function without its immigrant population.

My roommate is an immigrant. I have another friend who just passed her citizenship test. Many of my friends are first-generation Americans. Donald Trump's wife is an immigrant. These 19 #ADayWithoutImmigrants photos show just how important immigrants are to the sustained identity of the United States.

Standing Together With Immigrants

Immigrants are vital to every part of the U.S. economy. "A Day Without Immigrants" shows how schools and businesses would be negatively affected without employing immigrants, teaching students, providing goods and services to immigrants, and accepting the patronage of immigrants. #GhostTown.

We Are All Immigrants

According to the Economic Policy Institute, immigrants make up 16 percent of the U.S. workforce despite being only 13 percent of the population. Additionally, many immigrants are business owners, and the share of immigrant workers who own small businesses is higher than the comparable share among U.S.-born workers. In California, famers who voted for Trump are now reportedly in fear of losing qualified field workers under Trump's immigration agenda.

Immigrants Contribute to a Rich Culture

Imagine if America was made up of only white men. That sounds pretty awful to me. Immigrants, and women, contribute vitally to this country's culture in the forms of art, cuisine, music, theater, and more. Immigrants throughout history have defined American culture.

The American Dream Is for Everyone

It's called the American Dream for a reason. America has long been seen as the place where anyone can "make it" and live a life of prosperity. America also has a history of oppressing immigrants during times of conflict (the Japanese American internment camps during WWII). The American Dream only works if it's accessible to everyone.