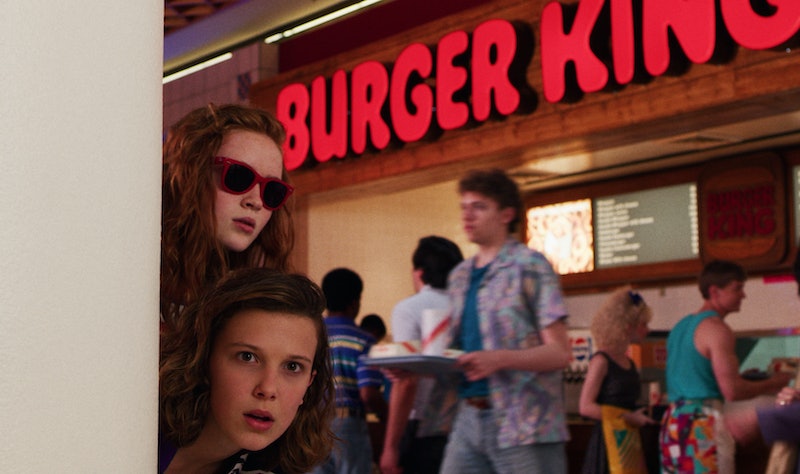 Spoilers for all of Stranger Things 3 ahead. Though the Stranger Things 3 plot may have been kept as classified as Russian intelligence, it's no secret that the Netflix series is unabashedly indebted to the '80s. So just as in previous seasons, there are plenty of Easter eggs in Stranger Things 3. And whether those be '80s pop culture references, callbacks to previous seasons, or even a few anachronistic details, fans will undoubtedly want to unpack them all. This list is a good place to start.

For its third installment, Stranger Things is in 1985 when Back to the Future just hit theaters, New Coke was released, Russians were the ultimate movie villain, and The NeverEnding Story theme song was an earworm that apparently inspired teen love duets. Cary Elwes, who joins the cast as Hawkins' mayor this season, hadn't starred in The Princess Bride just yet, but that doesn't stop him from taking Sean Astin's place as the show's token '80s icon.

There are plenty of other obvious' 80s nods throughout the season, but because you probably caught those, here are some of the more subtle details you may have missed, too. All that Mind Flayer chaos can be distracting.

More like this
This 'Black Panther' Character Is Starring In Her Own Marvel Show Next Year
By Grace Wehniainen
How The Thanksgiving Episode Of 'Gossip Girl' Changed Pop Culture History
By Gabrielle Bondi
How Is The British Royal Family Related To The Romanovs?
By Karen Fratti
Netflix Bumped Up The 'You' Season 4 Premiere Date — Here's What To Expect
By Bustle Editors
Get Even More From Bustle — Sign Up For The Newsletter