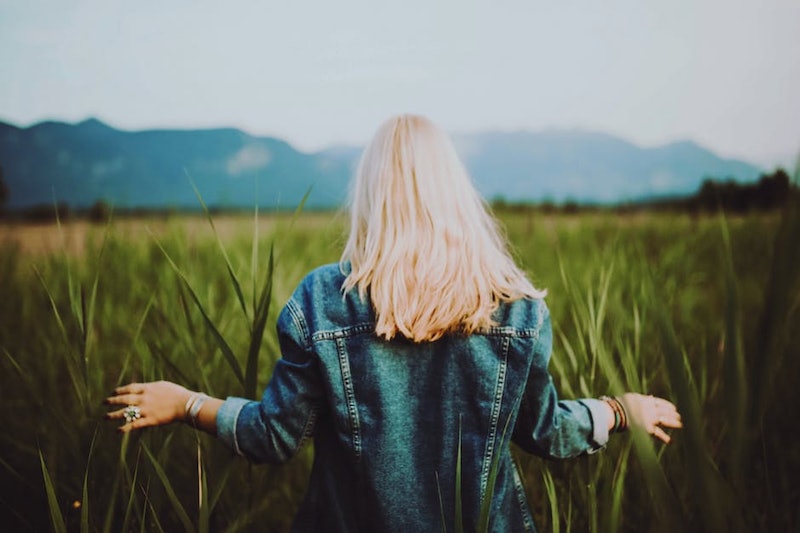 Who you are, at your core, is likely here to stay. But there are some surprising ways your personality can change as you age. Simply by living your life, having experiences, and thus maturing as a person, you're likely to see some traits come and some traits go over time.

And that's the cool thing about your personality — it really can evolve. "Many experts used to believe that your personality was 'set' by the time you were a certain age, usually somewhere around 25. This is due to the fact that the brain is very 'plastic,' or changeable, as a child and teen, but fairly 'set' as an adult," certified counselor Jonathan Bennett tells Bustle. "However, recent research has shown that your brain can be rewired at any age and that includes changing your personality."

That's good news if you aren't too fond of a certain trait, or if you'd like to work on something that's holding you back. But changes will likely happen anyway, whether you're aware of it or not. "As you gain life experience, it’s normal to adapt your personality, using your newfound wisdom to make smarter decisions and avoid previous mistakes," Bennett says. Read on for some changes you can expect to see, and others you can intentionally make, as you get older.

1. You'll Stop Caring As Much

As you get older, you'll likely start caring less. And I mean that in a totally good way. "You stop worrying as much about what others think and focus more on what is important to you, whether it be your career, family, or health," says NYC-based therapist Kimberly Hershenson, LMSW. You also will (sometimes with a bit of work) become less self-conscious.

Many people become more introverted as time goes on, either because they really were that way all along, and have finally accepted it. Or because they've finally stopped placing other people before themselves. "In our teens and 20s, we are all about socialization," Hershenson says. "As we get older it's not uncommon to want to stay in and relax."

While you likely had values since day one, they will only become more ingrained as time goes on. "We learn what is important to us in our lives and tend to make changes based on this," Hershenson says. And that's great news. "Staying the same and not growing is actually unhealthy. Changing and reprioritizing is a good thing!"

4. You'll Be Able To Handle Your "Annoying" Traits

Some "annoying" traits, like perfectionism, can be held in check as you get older. As clinical psychologist Dr. Joshua Klapow tells me, you might have spend the early part of your life hyper-focused on making things perfect. But as you get older, he tells me it'll be possible to apply traits like these only when it counts.

5. You Will Gain A Healthier Perspective

When you're young, it's normal to be bothered by little things that, as an adult, suddenly feel so much less dramatic. "As you age, you typically gain a broader, more mature perspective about life," says Bennett. "You begin to realize that you don’t have the time and energy for small, petty matters. You also are better at prioritizing what is worth your attention and what is best to let go."

6. You'll Have A Greater Sense Of Confidence

If your confidence wasn't too great as a kid, expect it to boost a bit as the years go by. "Greater confidence typically comes with age," Bennett says. "The longer you spend on the planet, the more you realize that you have one life to live and you should embrace your own convictions in a confident way."

7. You'll No Longer Give AF About Popularity

We all want to be liked. But that intense desire to be popular and perfect? It really does lessen with age. "It’s normal to not care as much about going with the crowd," Bennett says. "You aren’t as knowledgeable about trendy, popular matters, but you become surprisingly OK about it!"

I'm all for keeping goals alive throughout your life. But don't be surprised if you find yourself taking a more relaxed approach to achieving them. "Many people with a dynamic personality and big dreams settle as they get older," Bennett says. "They might have less energy to be the 'life of party' and pursue their big dreams." Or they may simply feel more relaxed, and therefore better able to go with the flow of life.

Whatever strange personality traits you were known for as a kid, watch in amazement as they become even more pronounced with time. "This isn't because we are necessarily changing overnight, but it's because the older we get, the more comfortable we grow with ourselves," author and life coach Kali Rogers tells Bustle. "We don't conceal ourselves from each other nearly as much as we did when we were insecure in our teens or 20s. We allow others to get to know us way more easily because we don't fear judgment like we used to. So our personality blossoms into something more tangible and pronounced."

10. Your Preferences Will Stay The Same

I'm sure you've heard of the Myers Briggs personality test. (If not, learn more about it here.) Well, if you took the test ten years ago, and then again today, your results would likely be the same. "This is because, while our personality can easily change, our preferences usually don't," Rogers says. "However, our percentage of preference can change. For instance, if you were an extreme introvert as a child, you're probably still an introvert now, but you might fall closer to the extroverted side of the spectrum thanks to school and jobs that have forced you to interact with others."

If you didn't like to try new things when you were younger, that feeling can start to diminish as you get older — especially if you're making an effort to change. "When we push ourselves into new situations and challenge ourselves, we grow accustomed to novel situations and exercising different aspects of our personality," Rogers says. "It's not that we inherently change who we are over time, but we learn to stretch and expand ourselves to fit more and more situations in order to enjoy life."

12. You'll Be Able To Choose How You'd Like To Respond In Certain Situations

If you were reactive as a teen or young adult, you might notice a near-magic ability to choose how you react, as time goes on. "If ... we come to learn what our tendencies are, how we are programed to respond, then as we age we can learn to leverage our personality," Klapow says. "Make it more refined, more complex, and shine it where and when we want."

13. The Way You Engage With The World Can Change

In the same vein, the way you engage with the world can change all thanks, again, to life experiences. "As we age, the things that we encounter change," Sharon Podobnik Peterson, founder of the self-help book subscription box GoLoveYourself, tells Bustle. "The ideas that we encounter change. And if part of our 'personality'/reactions are to entertain new ideas and be open and tolerant, then the way we engage with the world will obviously change."

Remember what I said about not caring as much when you get older? This (thankfully) means having fewer opportunities to feel stressed. "We stress less and have a carefree attitude," life coach Jenn Watterman Moore tells Bustle. "Things don't seem to bother us as much as we age."

14. Major Life Events Can Have An Impact

While most personality traits stick around, a big life event can change things up. "Your personality can develop with age, usually around a big life event such as a death, large move, marriage, parenting, or increased responsibility," Sasha Aurand, editor-in-chief of PsychnSex.com, tells Bustle. And that's, in some instances, an OK thing. "Progressive events like the ones mentioned changed people's personalities and for the better."

While this (sadly) doesn't happen for everyone, most of us become better people as we age. "Conscientiousness, being organized, self-disciplined, [and] goal-directed get better with time and experience, usually in your 20s," says Aurand. "By your 30s, your agreeableness usually gets higher and is connected to building relationships: at work, with friends, and romantic relationships." Pretty cool, right?

16. You Will Eventually "Act Your Age"

Again, not something that happens for everyone, but most of us will eventually grow up and start acting our age."Socially, we ... expect people to 'act their age' and as individuals, we usually play into that, whether it is conscious or not," Aurand says.

17. But You Won't Take Yourself Too Seriously

If you're able to keep a healthy perspective, as well as a willingness to try new things, you might reach a point in life where you no longer want to take things so seriously. "Of course, you can also be more bitter if you choose to and that is up to the individual," life coach Dr. Gayle Carson, CSP, CMC, FIMC tells Bustle. "Like everything, you can grow for the better or retreat for the worse."

Something magical can happen upon maturity, and that's the sudden urge to put other people first. "Maximizing your own happiness is no longer your primary goal in life," says author and life coach Zakiyya Rosebelle. "You start to forget to take care of yourself, and you focus on your needs far less." While it's nice to care for others, do so while also remembering to take care of yourself.

19. You'll Be Better Able To Stand Up For Yourself

After you've had a life experience or two, you might gain the ability to stand up for yourself, no matter what. "As you age, you put up with less crap," says relationship expert Rhonda Milrad. "You are less interested in drama and unsatisfying relationships and more willing to call out people for their behavior. An attitude of 'life is too short' sets in."

While it's nice to lean into your introversion and relax at home (if that's what you'd like to do), beware age-related complacency. "We tend to feel like we have already experienced the things that we like and no need to chance it. I call this the 'I like what I like,'" says Moore.

If you like what you like, cool. But don't let yourself become too stodgy, since that is not an admirable quality that often comes with age.

More like this
Eleven From ‘Stranger Things’ Is A Cancer Zodiac Sign, An Astrologer Says
By Brittany Beringer
Every Single Big & Small Way You Can Fight For Abortion Rights
By Tess Garcia
The 7 Best Knee Sleeves, According To An Expert
By Andrea Hannah
The UK Abortion Laws In 2022, Explained
By Sophie McEvoy
Get Even More From Bustle — Sign Up For The Newsletter