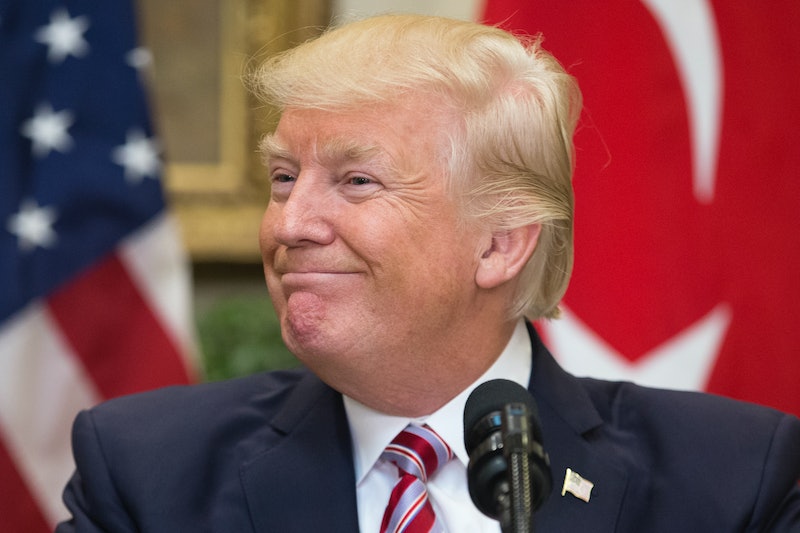 It seems the world is just not enough for President Trump. In an oddly spy-ish move, Trump reportedly shared classified intelligence with Russia during a meeting last week. The revelation, which came from the Washington Post this week, cleverly inspired some jokesters to draw parallels between the president and the world's favorite spy, James Bond. The resulting "Bond Trump Bond" memes and tweets poked fun at Trump's relationship with Russia and the very serious disclosure of classified information.

Quickly, movie titles, classic characters, and other Bond references filled the Twittersphere. Of course, From Russia With Love made a few appearances. The jokes offered a lighthearted-but-powerful response to Trump's decision to share classified information with Russia. Although the parallels between Trump and Bond are no more real than Bond himself, the idea that the president of the United States could take such a spy-like step, sharing state secrets with another country, is understandably troubling. For now, though, let's just enjoy the laughs.

From Russia With Love

Nobody does it better.

From Putin With Love

This isn't the first time Trump's relationship with Russian President Vladimir Putin has been questioned.

There's got to be a golden gun in there somewhere, right?

The president even tweeted about the intelligence-sharing.

The Eagle Who Hated Me

Would you rather have an eagle hate you or a spy love you?

For Russia's Eyes Only

Can't wait to hear who will sing this theme song.

Despite many unhappy voters calling for it, an impeachment process has not moved forward for the president.

Nobody fires Moneypenny and gets away with it.

Plot twist: The next Bond movie will pit 007 against Trump.

The World Is Not Enough

Seriously, though, please don't do it.

It's scary that Trump actually said part of that quote.

You can't deny the president likes his golf.

The Spicer Who Loved Me

Meanwhile, the jury is still out on whether White House Press Secretary Sean Spicer will get to keep his job.

You didn't expect the AHCA to be left out, did you?

The Trump-era health care plan would threaten Americans with many common pre-existing conditions.

It's always a competition.

"Hope and solace" should be former President Obama's new slogan.

Jokes aside, the president's decision to divulge classified information has many Americans worried. For his part, Trump has maintained that it's his right to do so — and he's not wrong. Still, an investigation could take place, and the consequences of Trump's action remain largely unknown.