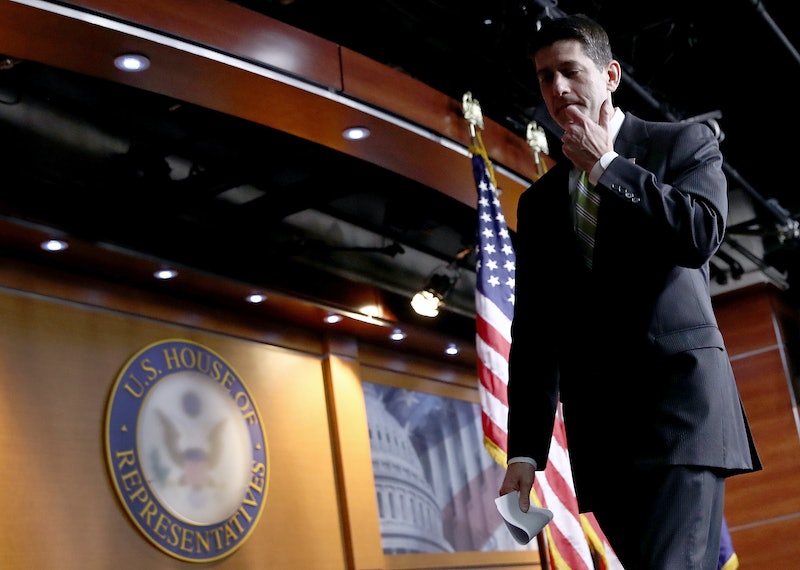 After the GOP's first attempt to repeal and replace Obamacare in March failed, party leaders have resurrected the American Health Care Act, attempting to gain enough conservative support for the bill to pass the House and Senate. The bill has been altered since its initial draft to remove Obamacare policies that protect people with preexisting conditions from paying more for health care. Chillingly, the newly amended AHCA would also consider sexual assault a preexisting condition, as well as domestic violence.

UPDATE: The AHCA has officially passed the House with a majority of votes.

The MacArthur-Meadows amendment to the AHCA, proposed by Freedom Caucus Chairman Mark Meadows (R-NC) and Rep. Tom MacArthur (R-NJ), co-chair of the moderate Republican Tuesday Group, would allow states to waive the current ban that prevents insurance companies from charging premium rates to customers based on their health history. This essentially allows pre-Obamacare discriminatory practices to once again be legalized. It also leaves survivors of sexual assault and domestic abuse particularly vulnerable to health care discrimination because of the mental and physical health conditions — like post-traumatic stress disorder and sexually transmitted diseases — which often result from such violent situations.

This discrimination is not unprecedented. In fact, in 2010, before the Affordable Care Act was established, one woman who took anti-AIDS medication after she was drugged and raped by two men she met at a bar was later denied insurance coverage because of the incident. According to the Huffington Post, insurers saw the pills listed on her health records and considered her a liability. They advised her to try again in a few years when she could prove she was AIDS-free.

If the MacArthur-Meadows amendment allows this type of discrimination to come back under the AHCA, survivors of sexual assault and domestic violence would face an extremely difficult decision: seek treatment and be forced to potentially pay more for health insurance, or refuse to go to the doctor and remain untreated for horrific injuries they have endured both mentally and physically.

In an op-ed for the Hill, Gina Scaramella, the executive director of the Boston Area Rape Crisis Center, described how access to health care is essential for survivors of sexual assault:

The mental health impacts of sexual violence are deep and often longstanding. Survivors need long-term access to nonjudgmental health and mental health services to reduce their suffering and mitigate as much as possible the stress that recovery from sexual violence puts on intimate family relationships, and obligations related to school and work.

Other largely gender-specific conditions, like postpartum depression and C-sections, would also be considered preexisting conditions under the new health care plan.

According to the New York Times, GOP leaders announced on Wednesday that the revised AHCA proposal has enough Republican votes confirmed for the bill to pass the House of Representatives.

Read more on the AHCA

The Glaring Misogyny Of The AHCA

These Republicans Would Rather Run Away Than Discuss The AHCA

How To Protest The GOP's Health Care Bill