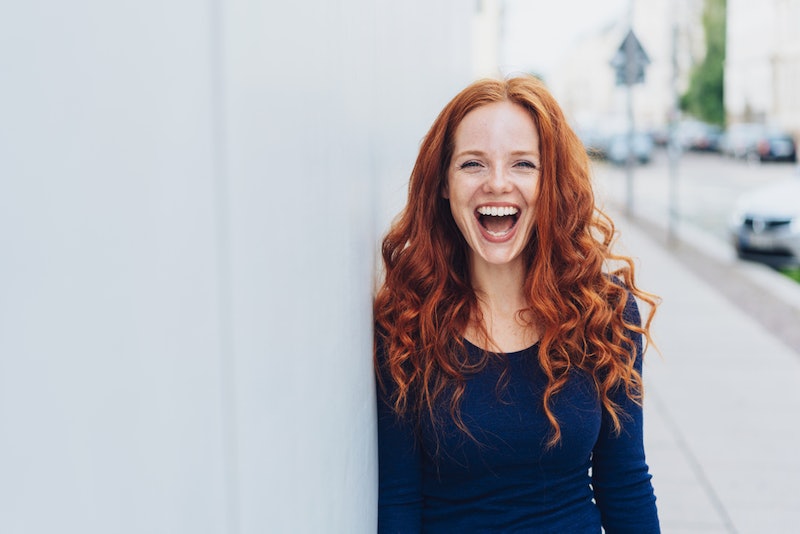 Wednesday, April 1, is April Fool's Day, which means that you shouldn't believe anything anyone tells you and should be extra careful about what you sink your teeth into, at least until Apr. 2. It also means you should play a lighthearted prank on your friends, even if that prank is only a funny post on social media. To ensure that your hoax post goes over well with your friends and followers, I've put together a list of funny April Fools' Day captions.

Whether you go the faux sonogram route and announce sextuplets, or style some clip-in bangs, you'll want make sure it's clear that it's only an April Fools' prank by pairing the post with a great caption about the holiday. Here you'll find a diverse collection of quotes, ranging from proverbs, to Shakespeare, to profound literary musings of contemporary writers — all encouraging us to lean into some comical relief.

I think we can all agree that it will be nice to take a break from fretting about everything going on in the world for a moment and have a laugh. Amirite? Happy April Fools' Day, prank responsibly and make your social media posts double-tap-worthy by using one of these quotes as a caption.

"I have great faith in fools: self-confidence my friends will call it." -Edgar Allan Poe

"April Fool, n: The March fool with another month added to his folly." - Ambrose Bierce

"If every fool wore a crown, we should all be kings." - Welsh Proverbs

"A joke is at most a temporary rebellion against virtue, and its aim is not to degrade the human being but to remind him that he is already degraded." - George Orwell

"This is the day upon which we are reminded of what we are on the other three hundred and sixty-four." - Mark Twain

"The trouble with practical jokes is that very often they get elected." - Will Rogers

"Here cometh April again, and as far as I can see the world hath more fools in it than ever." - Charles Lamb

"Lord, what fools these mortals be." - William Shakespeare

"Everything is funny, as long as it is happening to somebody else." - Will Rogers

"The full area of ignorance is not mapped. We are at present only exploring the fringes." - John Desmond Bernal

"It is the ability to take a joke, not make one, that proves you have a sense of humor." - Max Eastman

"Isn’t it appropriate that the month of the tax begins with April Fool’s Day and ends with cries of May Day!" - Robert Knauerhase

"A fool flatters himself, a wise man flatters the fool." Edward G. Bulwer-Lytton

"Suppose the world were only one of God’s jokes, would you work any the less to make it a good joke instead of a bad one?" - George Bernard Shaw

“A mother takes twenty years to make a man of her boy, and another woman makes a fool of him in twenty minutes.” - Robert Frost

"Mix a little foolishness with your prudence: It's good to be silly at the right moment." - Horace

"A sense of humor is the ability to understand a joke -- and that the joke is oneself." - Clifton Paul Fadiman

"Even the gods love jokes." - Plato

"When in doubt, make a fool of yourself." - Cynthia Heimel

Syeda Saad contributed to this article.

This article was originally published on March 29, 2019