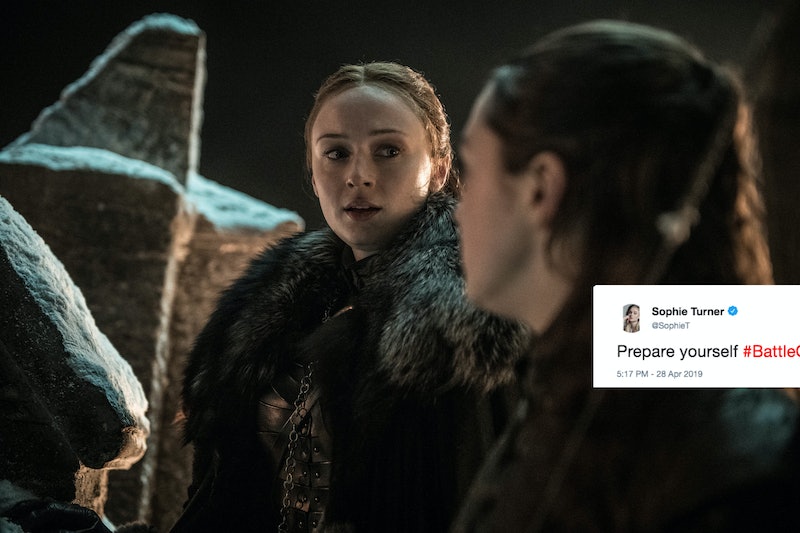 Game Of Thrones truly outdid itself this time. The epic Battle of Winterfell that aired during Sunday, April 28's episode, "The Long Night" was unlike any battle the show has tackled before, and that's not just because of its 1 hour and 22 minute run time. Spoilers ahead. Winterfell's encounter with the Night King was horrific, with plenty of heartbreaking deaths and resurrections (the Stark crypt was especially traumatizing), and through it all, fans took to Twitter to express their disbelief, their fear, and their excitement. And these 21 celeb tweets about Game of Thrones prove that even the rich and famous were just as stressed out watching the Battle of Winterfell as you were.

It turns out that celebrities are just like us — especially when they're watching HBO's hit fantasy series. Just like all the other fans, celebrities like Amber Ruffin, from Late Night with Seth Meyers, were squinting at their televisions, trying to figure out what was happening in the dark battle. And others, like Mariska Hargitay of Law & Order: SVU were jumping for joy over Arya's triumph over the Night King. Still more, like To All The Boys I've Loved Before author Jenny Han, were wondering what the hell Bran was doing while hundreds of soldiers died trying to protect him from the Night King.