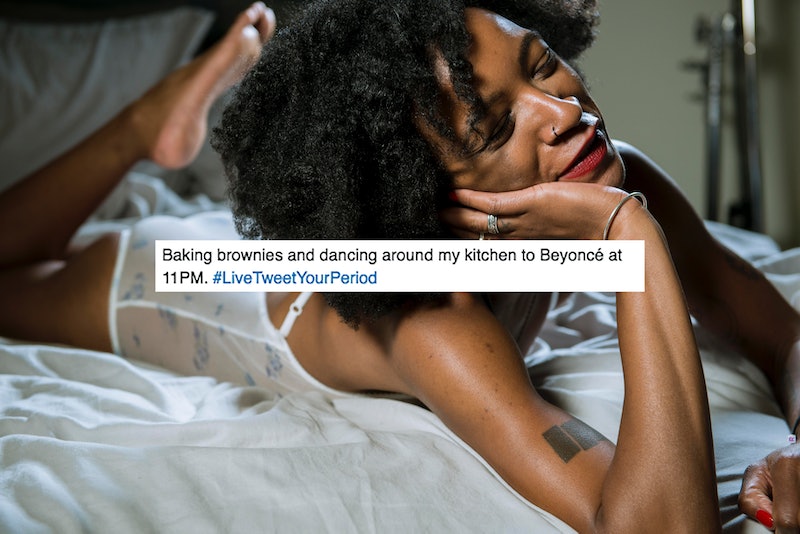 PMS is one of those things that a lot of people who have periods can related to. However, my little sister recently told me that she'd never assume to know what another person's PMS was like. That really got me thinking. I'd always thought of PMS as a fairly universal thing for people who have periods, but she made a good point. My feelings and/or pain around my period probably aren't exactly like anyone else's feelings and/or pain. But the hashtag #LiveTweetYourPeriod does a pretty good job capturing the range of feels that our monthly bleeding can bring on.

Because here's the thing about periods: They're different for everyone. While some of us can't move because the cramps are so overwhelming, others might just have a bit of spotting here and there. Some people have emotional reactions; some people have physical reactions; and some people have both. Oh, and something I've learned in the now 20 years since I started bleeding? It can change dramatically at different parts of your life.

Sometimes feminists (myself included) are reluctant to talk about the ups and downs of periods, because they've been used against women for so many years. Anyone who's been asked if she's "on the rag" when she's shown emotion or heard the misogynistic "reasoning" that a woman can't be president, knows that our hormones can be used against us. But I think that full equality doesn't come from hiding our experiences but from normalizing them. And nothing is more normal than more than half of the population bleeding about once a month for about half of our lives.

So to celebrate and commiserate everything that is our periods — from weird food cravings to crying jags to extreme horniness to dancing to Beyoncé — here are 21 tweets from #LiveTweetYourPeriod. Grab some chocolate (or candy corn) and a heating pad, sit back, and enjoy.