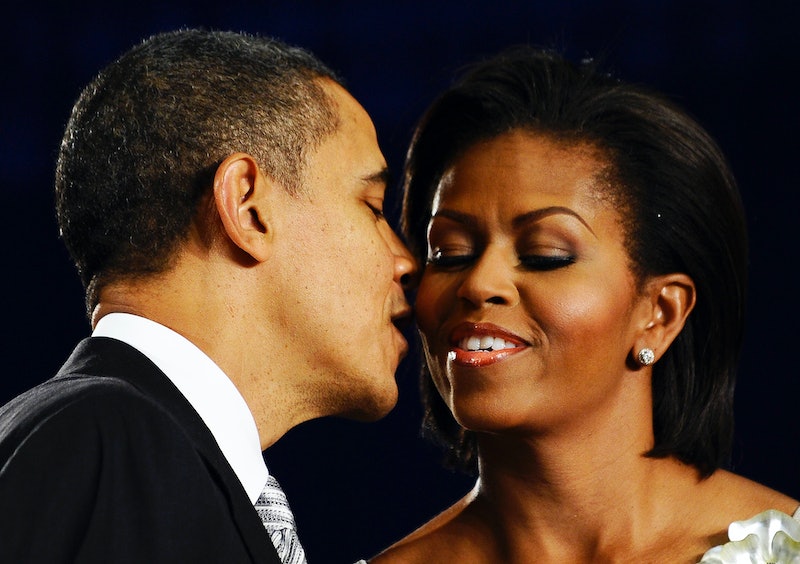 Following this tumultuous year, it seems that many Americans' core values have been shaken. With Hillary Clinton's unexpected and crushing defeat and the election of well-documented misogynist Donald Trump to the presidency, it can feel difficult to determine which way is up. But if there's one thing you should never give up on — excuse any cheesiness here — it's your faith in true love. Because despite who may be entering the White House, we've had an amazing example of what true, hardworking, and dedicated love looks like from Barack and Michelle Obama these last eight years.

You can feel their love from so many places — from the way they look at one another, to the manner in which, after all these years and regardless of job titles, still challenge one another to be the best version of themselves. It certainly is something to aspire to in your own partnerships.

These photos give a glimpse into the Obamas' love for one another, surely a key element to the success of the president's two terms in office. Barack said this himself, telling Oprah in a 2011 interview: "Obviously I couldn't have done anything that I've done without Michelle. You were asking earlier what keeps me sane, what keeps me balanced, what allows me to deal with the pressure. It is this young lady right here. ... Not only has she been a great first lady, she is just my rock. I count on her in so many ways every single day."

Barack and Michelle were photographed in this embrace during his election night victory rally in 2008 — the look he gives her says it all.

The pair were captured dancing during the Midwestern Regional Inaugural Ball the evening of President Obama's 2009 inauguration. No dad dance moves this time.

Another shot from the 2009 inaugural ball, because it's too cute not to share.

It would be amiss to discuss Barack and Michelle's love for each other without sharing a photo of the whole family. Sasha and Malia (and Bo, too!) have done so well being in a loving family.

A Sweet Moment On Their Wedding Anniversary

A Partnership To Aspire To

This photo was taken moments after President Obama signed a school nutrition bill into law, a subject the first lady has heavily championed the last eight years as well.

Families that campaign together, stay together.

The Best Kind Of Hug

Everyone knows the best kind of hug is the sneaky, behind-the-back hug.

Always Got My Vote

Who do you think they voted for?

Barack and Michelle delivered an adorable reading and performance of Where The Wild Things Are during this year's White House Easter Egg Roll.

They say the best couple's indulge in each other's interests — here, the presidential couple can be seen sharing a laugh at a basketball game, one of Barack's favorite sports.

Barack gives Michelle a sweet kiss following an August 2016 rally. Somehow, the black and white filter makes it all the cuter.

Michelle and Barack exchange glances at a 2008 rally, with another look that really says it all.

A sweet image from another White House Easter Egg Roll. Not even the Easter bunny can distract from this one.

The White House Correspondents' Dinner really won't be the same without these two.

Dressed Up With Somewhere To Go

During a March 2012 state dinner, Barack (understandably) couldn't keep his eyes off of Michelle.

Always By Your Side

It's really refreshing to see how they are so confident both in themselves and each other.

An image from the 2013 inaugural ball — both looked stunning and in love as ever during the event.

The pair were photographed here along with daughter Sasha during a 2010 beach trip to Florida.

Challenging your partner to remain healthy is key in a good relationship. Here are the Obamas doing just that on a vacation.

No matter how long they've been married, Michelle and Barack can often be found holding each other's hand wherever they go.

The Obamas are a wonderful reminder and example of what true love looks like. No matter what these next four years bring, they are certainly a couple to aspire to.

More like this
Here’s How Lizzo Is Supporting Abortion Rights After The Roe v. Wade Reversal
By Brad Witter
Every Single Big & Small Way You Can Fight For Abortion Rights
By Tess Garcia
Police Shove 'Full House' Star Jodie Sweetin At An Abortion Rights Protest
By Radhika Menon
5 Ways To Stand In Solidarity With Women In America From The UK
By Sophie McEvoy
Get Even More From Bustle — Sign Up For The Newsletter