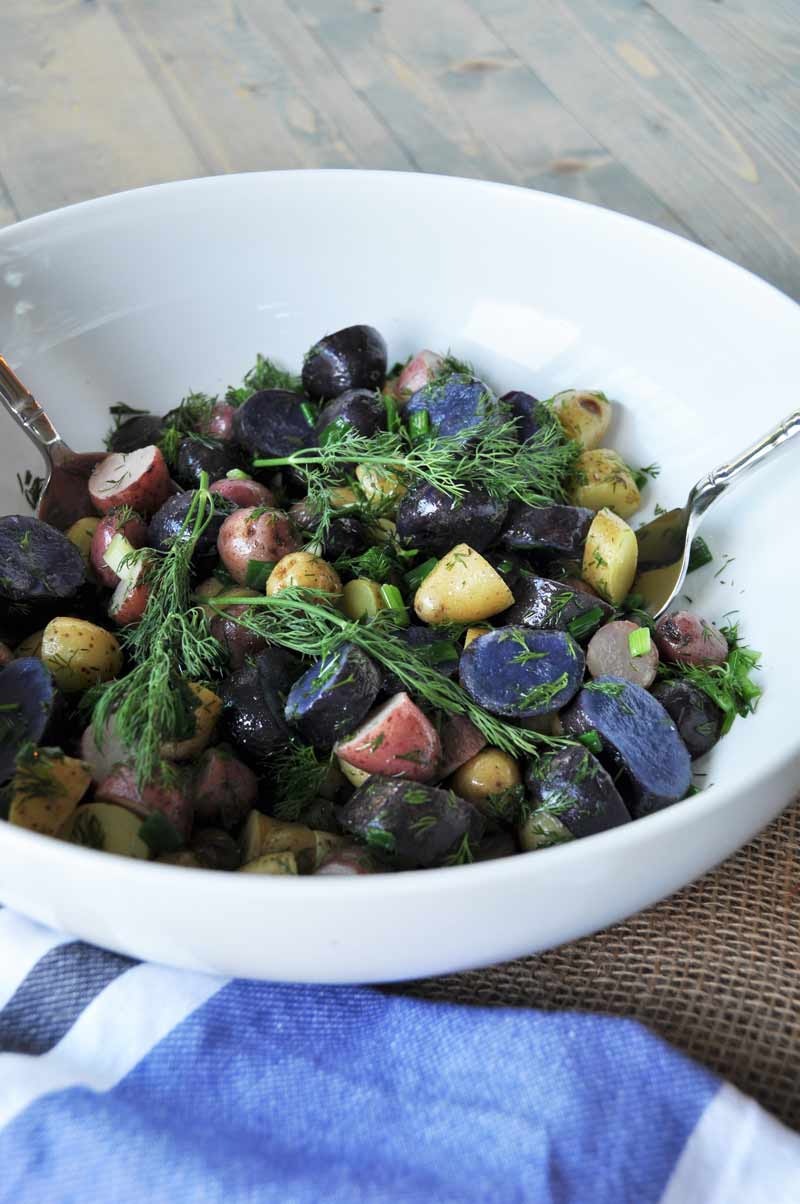 When you picture a Fourth of July barbecue, chances are the first image that comes to mind is piles of meat smoking on a grill — which, you know, means it's not exactly the most vegan-friendly holiday there ever was. But just because most people might be chowing down on ribs and burgers doesn't mean you can't invite your vegan and vegetarian friends and family to your backyard BBQs this summer. There are tons of vegan-friendly BBQ recipes that are equally as delicious and filling as "traditional" BBQ foods, and if you're willing to put in the extra effort to make everyone feel welcome, your Fourth of July bash will surely be a hit.

The number one rule of being a good party host? Making sure that no one is left out. Even though you might not be super familiar with vegan cooking, it's always courteous to have a few easy-to-make vegan recipes on hand in case you find out someone on your guest list is a vegan or vegetarian. And to be real, plenty of vegan recipes are straight-up delicious, so it's not like only vegan guests will enjoy the dishes you make.

If you're planning on throwing a killer party this Independence Day, here are 23 easy vegan barbecue recipes that you can whip up in a jiffy for your celebration.

This might look like your average BBQ pulled pork sandwich, but in reality, this meaty-looking creation is made of jackfruit, a meat substitute that you can find in most Asian markets (or online). These BBQ jackfruit sliders from Fo Reals Life require only a few ingredients, so they're super easy to make — the entire cooking process will take less than an hour. And if you opt to skip the homemade BBQ sauce and use store-bought, things get even easier!

In case jackfruit is too exotic for your tastes (or you simply couldn't get your hands on some), you can also use carrots as a pulled pork substitute. This pulled BBQ carrots recipe from Veganosity is super easy to make — basically all you have to do is shred up some carrots and toss 'em in whatever BBQ sauce you fancy.

One of the best things about mushrooms is how versatile they are — they can even be BBQ-ified! This shroom-filled recipe from Wallflower Kitchen only takes 40 minutes to make, and is as simple as sautéing some mushrooms, tossing them in a pre-made BBQ sauce, and serving them up on some rolls.

This all-American classic usually contains ground beef, but these vegan sloppy joes from Veganosity use a mixture of chopped cauliflower and Beyond Meat beefy crumbles to mimic the signature chunky texture of a sloppy joe.

Pumpkin might be a staple in your autumn cooking, but it's so yummy that you might as well use it year-round. This pumpkin quinoa veggie burger recipe from Veggie Primer is quick and easy: it takes only 20 minutes to prep and 20 more to cook.

There's never a wrong time to eat pizza. This vegan BBQ veggie pizza from Vegan In The Freezer has all the flavors and textures of traditional pizza, but it's totally vegan. And if you use a pre-made crust, it's super simple and quick to throw together!

Meat (or meat substitute) on a stick is a quintessential component of any barbecue. These BBQ tempeh skewers from Fo Reals Life are simple enough to make — the only trick is that the tempeh needs several hours to marinate in order to ensure maximum flavor, so don't leave these until the last minute.

If you're planning on making chicken wings for the meat-eaters at your BBQ, it's only fair to show your vegan and vegetarian guests some love with this recipe from Vegan Richa, which only requires 20 minutes of active kitchen time. Simply chop up some cauliflower, batter and bake it, then toss it in a yummy mango sriracha glaze and voila! — vegan-friendly "wings" that even meat-lovers won't be able to resist!

What's a backyard BBQ without a delicious, creamy mac and cheese? This vegan-friendly mac from Fo Reals Life has one secret ingredient that takes it over the top: liquid smoke. It might sound intimidating, but this recipe is actually pretty easy to pull off and will satisfy any mac and cheese lover.

Potato salad is a summer BBQ staple, but it's traditionally made with heaps of mayo, making it a no-go for vegans. Luckily, this vegan potato salad recipe from Pure Ella boasts all the flavor and creamy texture of traditional potato salad, without the mayo.

This refreshing dish with a kick is super low-maintenance, because it only uses six simple ingredients. Although "spicy" and "watermelon" are two words you might not see used together all that often, this spicy watermelon spinach salad recipe from Veggie Primer will have you rethinking everything you thought you knew about watermelons.

Summer is the perfect time of year for creamy, crunchy chicken salad, and this vegan chicken salad from Veganosity will ensure that everyone can enjoy this BBQ-friendly dish. The recipe uses jackfruit as a chicken substitute, which then gets tossed in a vegan mayo and combined with traditional chicken salad ingredients like grapes and celery.

This bright, summery pasta salad recipe from May I Have That Recipe is equal parts pretty and delicious. It's creamy, crunchy, and only takes 25 minutes to whip up!

No barbecue is complete without baked beans, but because the flavor of baked beans usually comes from bacon, that makes them a huge no-no for vegetarians and vegans. Fortunately, these bourbon maple baked beans from Averie Cooks pack all the delicious flavor of classic baked beans, and are super easy to make — all you have to do is let them simmer in a slow cooker for 12 to 16 hours.

What's a party without an assortment of dips that people can munch on while they wait for the other food to be ready? This white bean dip from Vegan In The Freezer is yummy, and takes only 20 minutes to make.

As a general rule, no party is complete without a huge bowl of hot, spicy cheese to dip things in. This queso dip from The Veggie Girl is a vegan twist on the classic, but is no less delicious than its dairy-filled counterpart.

These adorable, easy-to-make maple peanut butter cookies from Vegan In The Freezer are sure to be a hit, even amongst non-vegans. Including cook time, they take less than half an hour to make, which makes them the perfect bite-sized dessert for your Fourth of July BBQ.

Who says snickerdoodles can only come in cookie form? These vegan snickerdoodle bars from The Misfit Baker are proof that no matter what package it comes in, the gooey, cinnamon-y deliciousness of snickerdoodles is always a hit.

For a summery twist on a traditional sugar cookie, try making these vegan lime sugar cookies from Heart of a Baker at your Fourth of July bash. They're sweet, tart, and perfectly snack-sized.

Of course, you can't have a BBQ without some sort of chocolate to satisfy everyone's sweet tooth. These chocolate bourbon vegan cheesecake bars from Heart of a Baker are rich and decadent, and only take 30 minutes of prep time.

If you're planning a Fourth of July party, you know that figuring out the perfect menu is crucial to a party's success. Making sure all your guests are satisfied is key, so it's important to include vegan and vegetarian-friendly food options — or just throw an entirely vegan BBQ, if that's your thing.