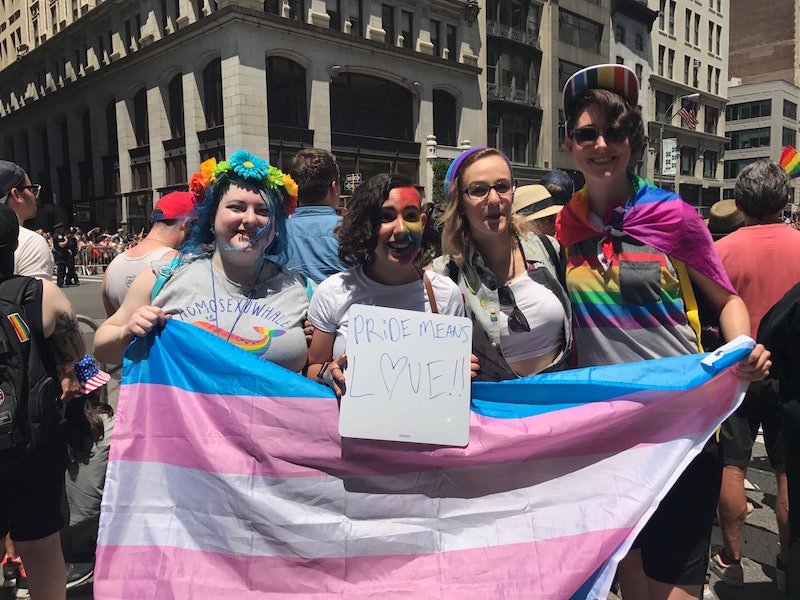 If you have ever attended New York City's Pride parade (or any Pride celebration across the country, for that matter), you know that it can be an incredibly moving experience. It's a celebration of love, a demand for LGBTQ visibility, and this year more than ever, it serves as a reminder that the fight for basic human rights and equality is far from over. One year after the horrific Orlando Pulse shootings and almost six months into a tumultuous Donald Trump presidency that continues to put LGBTQ rights in danger, New Yorkers explain exactly what this year's Pride celebration means to them — and why showing up to Pride is so important.

Pride has always had a rich history in New York City. The first annual Pride march as we know it took place as a grassroots endeavor in NYC one year following the Stonewall Riots of 1969, when police raided the iconic Stonewall Inn and clashed violently with LGBTQ patrons. Since its early days of organization, the Pride march through Manhattan has grown tremendously — in 2016, attendance was estimated at almost 2.5 million — as the LGBTQ community and allies take to the streets to uplift voices that are marginalized, jeopardized, and too often shut down altogether.

Given today's increasingly dangerous political climate and attitude toward LGBTQ rights and other marginalized communities, that kind of solidarity is ever more crucial. We asked people attending NYC's Pride parade and Pride Island celebration on Pier 26 what this year's Pride means to them, and here's what they had to say.

More like this
Charlene White & MPs Lead Tributes For Bristol Bus Boycott Organiser Roy Hackett
By Sam Ramsden
Christina Aguilera Took A Powerful Stand At Brighton Pride
By Sam Ramsden
What The Lionesses’ Win Really Means For The Future Of Football
By Angelina Kelly
The 8 Best Chew Bones For Puppies, According To A Vet
By Andrea Hannah
Get Even More From Bustle — Sign Up For The Newsletter