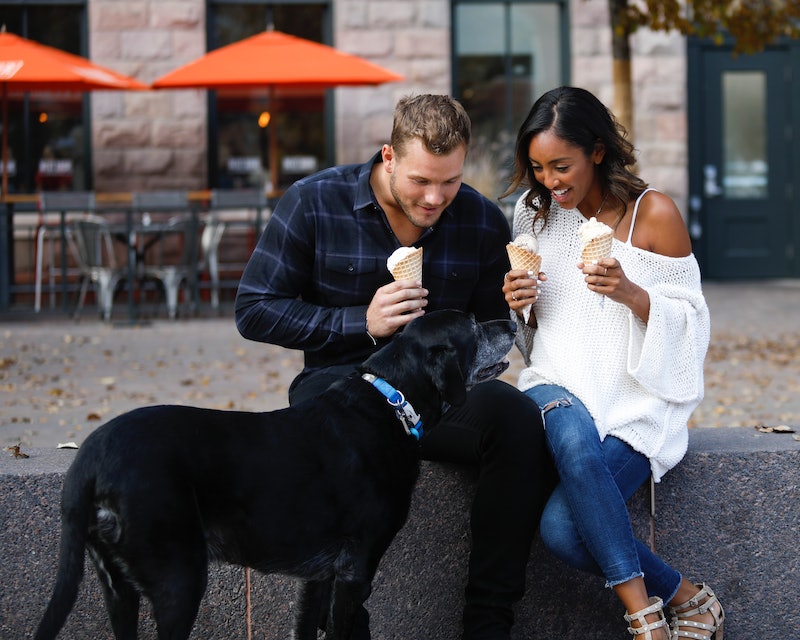 As Colton makes his final decision about who he'll choose on The Bachelor, he's sure to leave some serious emotional wreckage in his wake. You can't avoid that when the name of the game is to break 29 hearts on the way to true love. Right now, Tayshia, Hannah G., and Cassie are left, each waiting to hold Colton's heart, and, like in Highlander, there can only be one. But there's a good chance Tayshia won't win The Bachelor based on some clues from social media and pure speculation on my part.

Tayshia was a dark horse at the beginning of the season. She has pretty eyes, a pretty smile, and a bubbly personality, but she stayed quiet and cool up until about six weeks into The Bachelor airing. Then, she and Colton seemed to be fostering a real connection, which was fun to watch. Colton isn't the most forthcoming guy, and Tayshia seemed to bring him out of his shell. It went well for a while, but now, we're at the end, and Colton's relationships with other women seem like they've just plain progressed more than his relationship with Tayshia.

Tayshia is a delight (girl, please DM me if you want to get a drink, because we should be friends), but is she right for Colton? These clues show that she might not get that ring at the end of the season.

Tayshia was allegedly dating another guy up until right before she left for The Bachelor. According to Us Weekly, she and Chase Olswang hit it off when they met in Newport Beach, CA, and dated for almost a year. That's very little lag time between boyfriends (which is OK, you do you), but what if Tayshia isn't completely over her ex and tells Colton, "thanks, but no thanks?" Stranger things have happened on this show.

Tayshia's hometown date with Colton went fine... until Colton met her dad. Tayshia's dad was not exactly thrilled that his daughter wanted to marry a man she met on a reality show, and he said as much to Colton. He eventually said Colton could marry Tayshia if he wanted, but this is going to be a tough road for Colton to climb — maybe too tough.

Her Social Media Is A Little Too Active

Contestants and winners on The Bachelor and The Bachelorette are supposed to go kind of dark when they get back from filming so as not to reveal spoilers or dates of elimination. Tayshia has been posting up a storm for a while, which tends to make this Bachelor viewer think that she had the time to do so... and that no one is telling her not to (i.e., she didn't go the distance.

On that weird train date, Tayshia told Colton some intel she heard about Caelynn and Cassie talking about being the next Bachelorette. OK, and? Caelynn and Cassie are best friends on the show, so if they want to talk about their Bachelor plans, whatever. But Tayshia needed to tell Colton, for whatever reason, and if there's one thing you don't do on The Bachelor, it's this — tattle. In the end, Colton might be totally turned off by Tayshia's babbling. The messenger always gets shot in these situations, and Colton may not be so forgiving.

If Tayshia doesn't end up with Colton at the end, it's not so bad — there's always a chance at the Bachelorette or Paradise.