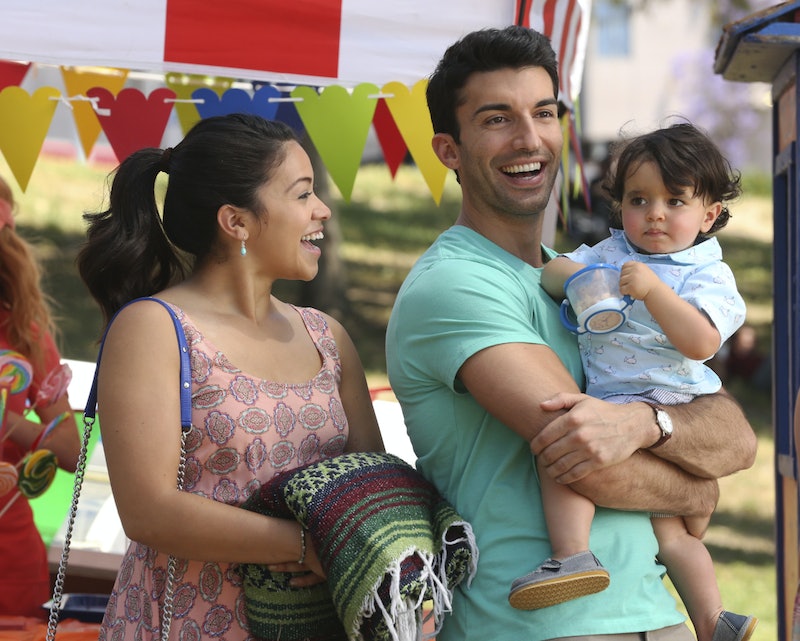 After that shocking Jane The Virgin twist, fans are asking themselves what this means for Jane. Will she go it alone, or will she rekindle a romance with Rafael? Last year, in an interview with Bustle, actor Justin Baldoni hinted that Rafael and Jane could get back together on Jane The Virgin. "I think if that's where the story led," he explained. "I think they've both grown a lot." It's true that they have both matured since they first tried dating, shortly after realizing they were going to become unexpected parents. Over the course of three seasons, though, the writers have been dropping clues that Rafael and Jane aren't meant to be. In fact, they may just be better as friends and co-parents.

The writers of Jane The Virgin have done a good job of keeping hope alive, but, if you look close, you'll find that they've been throwing in little hints here and there that show Rafael and Jane's relationship has been changing. The romance is fading, but it's made their platonic relationship stronger. Their scenes have been focused on what they need to do to make things easier for Mateo. They've offered love and support, but it's as two parents who are focused on doing the right thing for Mateo. Don't believe me? Look at the signs inherent in these five big moments.

1. When Rafael Puts His Feelings For Jane Aside

When the two take a look back at their son Mateo's first year, it's clear they have a partnership — but it's not the one that Rafael wants. As they remember the two of them getting the good news that their little boy was just the size of a peach, and seeing him for the very first time, it's clear Jane and Rafael are in different places then they were just 12 months ago.

As the narrator tells us, "a lot changes in a year," and, while a lot also doesn't, Rafael realizes Jane has moved on and he needs to, too.

2. When Rafael Doesn't Reveal His Feelings For Jane On Her Wedding Day

Rafael daydreams about telling the mother of his son to not marry Michael in Jane The Virgin's Season 2 finale, like some Matthew McConaughey rom-com, but, in the end, he decides he can't do that to her. Certainly, that's a pretty stand-up move, but it also shows how much Mateo has changed their relationship. Rafael can't risk pushing her away and has to move on with his life.

That's easier said than done, but Jane The Virgin's writers make it clear that love doesn't always work out the way you hope. There are things that are more important than you and your feelings. Rafael not telling Jane shows that there is something bigger than romantic love between them: mutual respect.

3. When Jane Makes It Clear Rafael Is Family

Rafael knows he has to move on, so he does, dating other women. One of those women is Jane's cousin Catalina, who he first meets in "Chapter Fifty." Jane seems jealous of this pairing, but it's obvious that this jealousy comes from a place of concern. Catalina isn't great at telling the truth, and Jane doesn't want to see Rafael dragged into her lies. Jane is protective of this man who is a big part of her own life. Their lives are intertwined in a way that goes beyond romance.

After realizing she shouldn't keep Rafael from making his own decisions, Jane inevitably lets Catalina know that Rafael is her family and she sides with him. Like Jane, the show has also made a decision, and that decision is it's that Mateo is more important than keeping Rafael and Jane in a never-ending love triangle.

4. When Jane Wants Rafael To Have A Relationship With Michael

Jane wanted Rafael to be a part of her life and went to great lengths to make that happen. In "Chapter Forty-Nine," Jane even set up a man date for the two guys that had them working out together. While it didn't go exactly as she planned — Michael thought Rafael was having an affair with a married woman — it showed that Jane was looking to take her relationship with Rafael to a new level. One that clearly wasn't a romantic one.

Throughout this season, Rafael and Jane haven't spent any time thinking about their past romance, but instead looking ahead to how they can both work together to care for their son. In "Chapter Forty-Six" the parents are at odds about the kind of pre-school their son should go to. While searching for a school for their son, they're forced to work out their own feelings in the "Compassion Corner." What they learn is that they need to be honest about their concerns for their son and understand that those concerns may not always be the same as their partner. But, either way, they must work together.

It's the theme of basically all of Jane and Rafael's flare-ups since realizing that romance is no longer on the table. Whether it's figuring out where Jane should live so that Mateo is not too far away from Rafael ("Chapter Thirty-Eight") and Rafael trying to deal with Michael's close relationship with his son ("Chapter Forty"), the two have stepped up to do what's best for their son.

And that's what Jane The Virgin has made clear about Jane and Rafael's relationship: it hasn't been a missed connection, but a relationship built on the fact that their son always comes first. Just as Jane and Rafael have grown, their relationship has, too. It's one that we rarely see on television, because it isn't a will they or won't they. The writers aren't pushing for Rafael and Jane to get back together. They're pushing for them to keep working together for their son's sake, no romance needed.