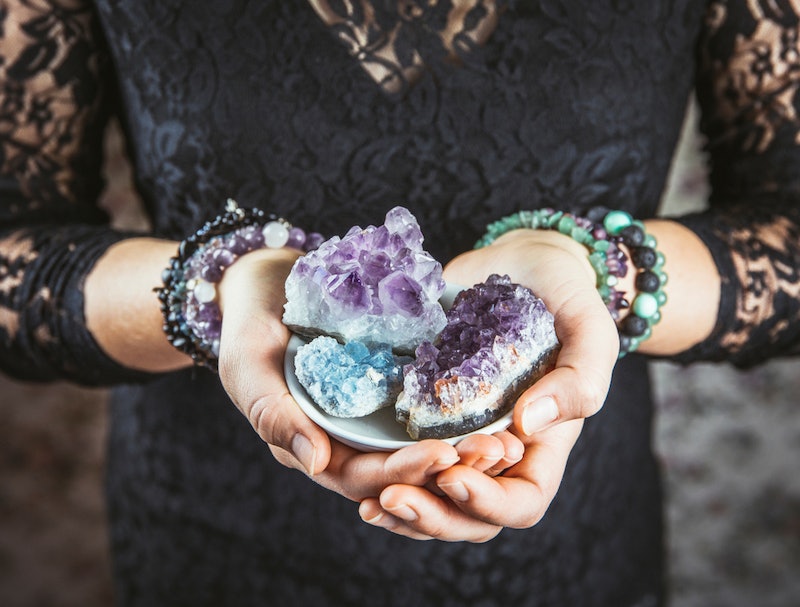 Get ready, cause we're diving out of the fluffy, airy clouds of Libra season into the dark and unnervingly deep waters of Scorpio season, meaning it's time to prepare for some intensity. Yep, you'll want to put on your protective gear, cause Scorpio season is officially here! And by protective gear, I really just mean some crystals for Scorpio season that can help you stay afloat during this mystical water sign's annual solar reign. Cause really, even though Scorpio is all dark n' mysterious, we can handle it. This season is going to be astrologically intense, but it's also bringing truth and transformation, and that's ultimately a good thing.

The sun enters Scorpio on Oct. 23 and will stay there until Nov. 22. Ruled by the planet Pluto, god of the underworld, it's no surprise that Scorpio gets a reputation for being the dark horse of the zodiac. Scorpio is dark, sexual, intense, and provocative in the absolute best way possible. There's dark and light in everything and everyone — and Scorpio embraces and embodies all of it. "Scorpio is the sign of depth, intimacy, and extremes of feeling," explained Cafe Astrology. "Superficiality simply will not do with the Sun in Scorpio." So while Libra — ever balanced and just — excels at keeping up appearances, social graces, and diplomacy, Scorpio vibes could care less about those matters. Scorpio wants the truth and nothing but the truth, and it isn't afraid of the repressed pain and darkness that can come along with it, so we should all prepare to shift into this mindset as we embark on this new season.

That said, sometimes the truth hurts! Sometimes it's dark and scary and intense, and it can be freaky to face your shadow side and deal with unconscious issues and tensions brewing beneath the surface. Using mystical, magical healing crystals for Scorpio season can be a super helpful way to take advantage of intense energy and not totally drown in deep pool of emotion that we all have to swim through this season. Here are five crystals that align perfectly with Scorpio's reign and how to use them for maximum good vibes.

This is one of the most magical, otherworldly stones around — which is perfect given that Scorpio's ruling planet, Pluto, is also the god of all things related to the occult. Using labradorite is said to help people develop their own magic abilities, such as enhancing clairvoyance and the ability to recall past lives or communicate with spirits. Halloween séance, anyone?

How to use it: During intense Scorpio season, when everyone is sorting through their psychic stuff, it's important to make sure you are spiritually protected! Do a ritual with labradorite to heal up any "tears" in your aura by meditating with the crystal and spiraling it "through and above your hair," as described by Crystal Vaults. It might feel silly, but calling upon the alleged healing power of labradorite certainly can't hurt when it comes to making sure you're psychically sound.

Smoke is cleansing — that's why we burn sage or palo santo in order to cleanse our space (or ourselves!) of negative energy. Smoky quartz literally "smokes out" bad vibes in the same way, except in sparkly, crystal form. "When life throws you shade, throw it right back with the Smoky Quartz crystal," wrote Energy Muse on its site. "The truth can set you free and the Smoky Quartz crystal provides the roadmap to get there." During truth-lovin' Scorpio season, smoky quartz is there to ground you, cleanse out the crap, and usher in realness.

How to use it: Smoky quartz is a perfect daily detox crystal and, like most quartz varieties, works well with other stones — so incorporate it into your practice throughout Scorpio season and see what emotional baggage you're able to shake loose as a result. "Use this stone to amplify the energy of all the stones surrounding it, which creates a synergy of soothing vibes, the spiritual Band-Aid to any painful emotional wounds," explained Energy Muse. "Place Smoky Quartz at the bottom of your feet and by your sides, with the option of including other stones in a healing layout for an all over chakra detox." Think of this as a juice cleanse for your energy field.

Obsidian Sphere With Stand, $28, The Hoodwitch.

Ready or not, here it comes! With Scorpio season comes deep, transformational truths — so you may as well ride the stormy waves using a potent truth-bringing stone like obsidian. "Obsidian has a tendency to work very quickly to move truths to the surface to be resolved," explained The Hoodwitch. "[It] can be very intense and one must be ready to confront their issues when working with this powerful healing stone." Confronting the truth isn't always easy, but it's one of the Scorpion's strengths, so let's all seize this opportunity for resolution.

How to use it: Obsidian is perfect to use in a scrying ritual, which can help you communicate with loved ones who have passed or even see into your past lives. Scorpio season is the time to do it, too, as many Pagan religions consider this a time during which the "veil" between the worlds of the living and the dead has thinned. "By looking into a shiny piece of the stone in the right light, usually in low light is best, you may see the images of loved ones in spirit," wrote Healing Crystals For You. "For many centuries they have been used successfully by crystals gazers and shamans to make contact with the spirit world." Dim the lights, gaze into the mirror-like finish of your obsidian, and see what appears to you. You might be surprised what comes through.

Blue topaz, a stone associated with Scorpio season, is a powerful crystal that helps with communication and personal power. "It promotes truth and forgiveness, expression, and the confidence to fulfill one’s aspirations," wrote Crystal Vaults. Blue topaz is also said to be super useful for metaphysical work — so again, the Pluto-ruled, occult-heavy vibes of Scorpio season will welcome the blue topaz energy.

How to use it: Simply holding a blue topaz when you meditate can serve as a B.S. detector in a very Scorpio fashion. "Topaz may be drawn upon to uncover lies and illusions in others, as well as in recognizing where one has strayed from one’s own truth ... out of fear or in the desire to manipulate others," explained Crystal Vaults on its site. "Touch a Blue Topaz when you need people to reveal secrets or correct misinformation." Scorpio season is not the time to get caught up in lies, that's for sure, and this stone serves as a sort of crystalline truth serum.

The deep black jet stone is said to be associated with water energy, which aligns perfectly with Scorpio, given that it's a mysterious water sign itself. Like many black-colored stones, jet is amazing at reflecting negative energy away from you, and can also serve as a huge stress-reliever because of this. It's also reported to help stabilize finances, which is ideal given that money-ruling planet Venus is currently retrograding in the sign of Scorpio.

How to use it: Keeping a jet stone in your pocket during Scorp season is going to be super protective no matter what, but they work best when you've taken the time to activate them! Do an intention-setting activation ritual to kick off the season so you can reap the stone's benefits througout. "Breathe in the highest white light and visualize your intention for [the crystal]," explained Energy Muse. "Visualize all the negative energy and emotions leaving your body. The stones are listening." Bad vibes be gone!