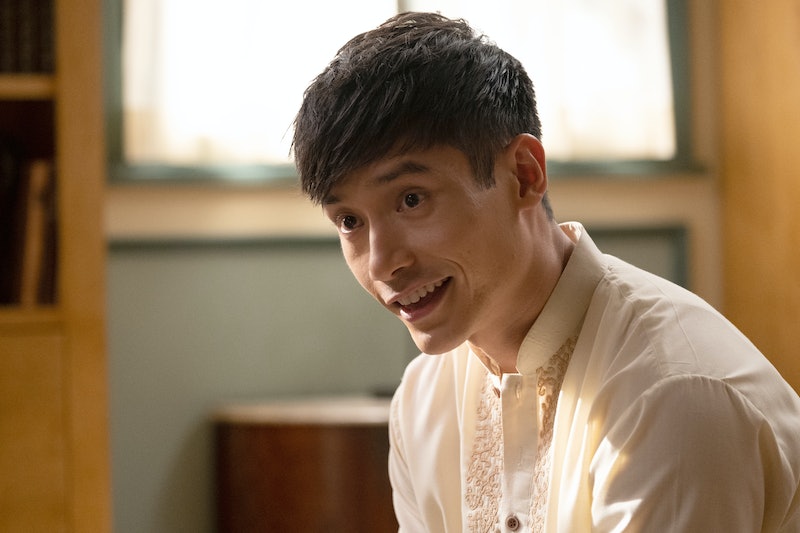 On the Nov. 7 episode of The Good Place, class clown Jason Mendoza (Manny Jacinto) makes two deft analogies in a row (three if you include his apt description of Trent — "a toilet full of broccoli"). First, he compares the gang's plan to basically do nothing in the final hours of their experiment to a "prevent defense," a tedious run-out-the-clock strategy. Then, when the gang decides to implement one last points-grab, he dips back into the football lexicon, likening it to a Hail Mary pass. It's so surprisingly astute, Tahani (jokingly) worries Jason might really be a demon in a Jason suit. But this isn't the first time Jason has been absolutely, definitively right.

1. Jason Figures Out It's Bad Janet — Before Everyone Else (Season 4, Episode 4)

Earlier in Season 4, Bad Janet was sent to the Medium Place to sabotage the gang's experiment, and it was Jason who deduced what was going on and developed a strategy to expose her. "Just know that I'm here for you, girl," he said, knowing that the real Janet always replies with a clipped "Not a girl." When Bad Janet said only, "Thanks, Jason," he knew her true identity.

2. Jason Guesses They're All Being Pranked (Season 1, Episode 4)

All the way back in Season 1, when Jason confessed to Eleanor that he wasn't actually Jianyu the monk, he told her what he was really up to when he was sitting around in silence: "When I say I'm meditating, I'm just trying to figure out what the fork is happening. I think we might be in an alien zoo, or on a prank show" — which technically, they kind of were.

In the beginning of Season 2, when Chidi and Eleanor visited the Medium Place after one of Eleanor's many instances of figuring out she's really in the Bad Place, Mindy handed them notecards of all the strategies for defeating Michael they'd already brainstormed. One intriguingly read: "Catch that magic panda, use her powers."

Eleanor guessed it was Jason's idea, because who else could it be? "That guy has no idea what's going on," Mindy told her.

Except he does! A few episodes later, as demons are destroying the neighborhood, a teleporting panda can be seen wreaking havoc in the background.

Usually it was Eleanor who first figured out the gang was actually in the Bad Place, but on this occasion, Jason beat her. "Yo, yo! Homies, check it! There's something messed up with this place. We keep fighting with each other, none of the TVs get the NFL RedZone channel, my soulmate doesn't even know who Blake Bortles is. I know this sounds crazy, but I think we're in the Bad Place."

When Jason decided to wed his "digital queen," objections from Tahani and Eleanor couldn't stop him. Janet is "nice" and, also, a babe, he argued. It may have happened early in the series, but it remains the apotheosis of "Jason was right."